If you talk to any hardcore gamer about wireless mice, you’ll likely hear many of the same complaints. Input latency, weight, and battery life are their biggest concerns, and with the G900 Chaos Spectrum, Logitech is aiming to address them all. The company is also hoping to do something unprecedented: Build a wireless mouse that outperforms its wired brethren. Those are some serious engineering challenges, but with the G900 Chaos Spectrum, Logitech looks to have fulfilled all of its goals. 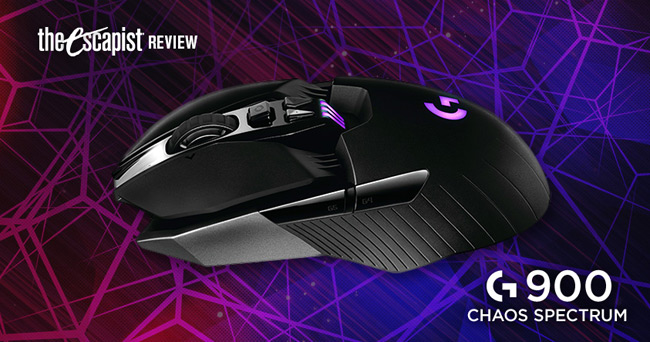 The G900 will look instantly familiar to any fans of the Logitech brand. Emblazoned with the backlit “G” that adorns all of Logitech’s gaming products, it sports two thumb buttons on each side. However, you aren’t stuck with that configuration. Each pair of side buttons can be removed easily, as they’re only attached by two magnets. A flat plate can then be used to cover that area and make it flush with the rest of the mouse. As someone who has had issues with accidentally hitting the off-side buttons on other ambidextrous mice, I appreciated this feature greatly.

In the past, finding the mouse with the least input latency meant using a high-end wired mouse. But the G900 changes all of that, says Chris Pate, the Gaming Portfolio Manager for Logitech G. In the company’s internal testing, the G900 was actually faster than the wired mice it was tested against: the SteelSeries Rival 300 and the Razer DeathAdder Chroma. After spending a week with the mouse, this isn’t surprising to me. It’s by far the most responsive wireless mouse I have ever used, and feels similar to (and even a bit better than) Logitech’s G502 wired mouse.

But what about the battery life? No one wants to be in the middle of a game and have their mouse suddenly drop dead, right? Logitech focused a lot of effort not only in choosing the right battery, but in optimizing every function of the mouse to be extremely power efficient. The company claims a battery life of around 24 hours with the mouse’s lighting turned on, or 32 hours with the lighting off. That’s not total time, that’s continuous use time. In my experience with the mouse so far, those numbers are actually a bit conservative.

I’ve been getting roughly 16 hours of work and 10-12 hours of gaming out of a single charge with the lighting turned on, and that’s not even letting the battery run completely dead. Logitech’s excellent software lets you tweak the mouse settings to extend battery life, and will show you on the fly how your changes are affecting the remaining battery. Best of all, the DPI indicator lights in the center of the mouse also light up to inform you that your battery is low (about 4 hours remaining), allowing you to grab the included braided cable and plug it in. The G900 will function as a wired mouse while charging, and plugging in takes only seconds. You could easily do it during a respawn timer or between rounds.

The G900 uses the same PMW-3366 sensor that is found in the G502, which means you can choose a DPI setting anywhere from 200 to 12,000. You can also set a mouse key as a DPI shift, allowing you to instantly drop your DPI to a level of your choosing, which is quite useful for things like sniping in first-person shooters. It’s also extremely accurate. After a week of use, I’ve not encountered any skipping or tracking errors.

One other thing that makes the G900 stand out is its weight, or the lack thereof. Most wireless mice are inherently heavy, thanks to the batteries inside. Eliminating weight was a major focus for Logitech, and it shows. The included 750 mAh lithium-polymer battery provides power without adding a ton of weight, and the design is tweaked to eliminate excess material. At 107 grams, it flirts with being almost too light for me, but after a brief adjustment period, I found it to be quite easy to use.

In fact, the G900 is easily the best wireless gaming mouse I have ever put my hands on. The only drawback to it is its price tag. Logitech’s asking $149.99 for it when it begins shipping in April. While that’s a steep price for a mouse, it’s actually the same price as the Razer Mamba, and it’s $10 less than the Steelseries Sensei Wireless. In short, great gaming wireless doesn’t come cheap, and the G900 is definitely making the case for being worth the price.

Bottom Line: The G900 Chaos Spectrum sits atop the wireless gaming mouse category, and outperforms many wired gaming mice as well. It’s pricey, but definitely delivers the performance it promises.

Recommendation: If you’re a peripheral junkie, or you just want a gaming mouse that offers high performance without the nuisance of wires, the G900 is for you, assuming you’re willing to shell out the premium price.