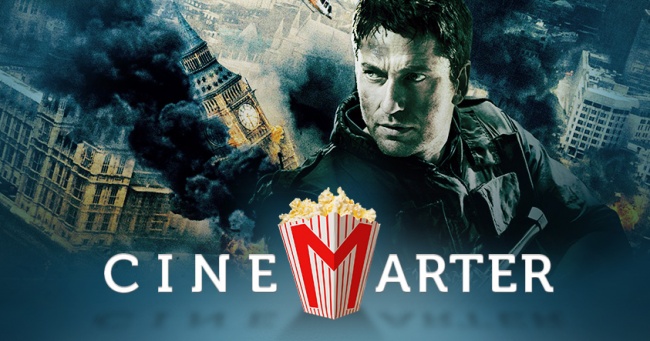 In case you’ve forgotten – and that’s something that’s unbelievably easy to do – Olympus Has Fallen was the first of two “attack on the White House” movies released in 2013. It saw Gerard Butler as a one-man-army John McClane copycat tasked with killing all the attacking Koreans and saving the life of the President of the United States (Aaron Eckhart). It was far too dull to be noteworthy, but since it was released before the vastly superior White House Down, audiences weren’t tired of the premise and it made just enough money to get a sequel – and I’d like to stress the “just” part of that statement. On a $70 million budget, it had a worldwide gross of just over $160 million. That’s barely enough to turn a profit. But, here we are, three years later and with a sequel on our hands, presumably shot with every camera wrapped tightly in an American flag, since few movies are as patriotic as this one, even though most of it doesn’t take place in America.

As I’m sure only the most astute among you have determined, the new movie takes place in London. Following the death of the British Prime Minister, many of the world’s leaders have flown to London to attend his funeral. However, prior to that taking place, terrorists descend upon the procession, dozens – if not hundreds, including several of the aforementioned world leaders – die, and Secret Service agent Mike Banning (Butler) finds himself running through the streets of London, determined to protect the President from kidnapping or assassination.

London Has Fallen takes the “bigger is better” approach to filmmaking, setting the film in an entire city – or select empty streets of a city – as opposed to a single building. The theory is that if we visit more locations and blow up more things, we’ll think the sequel is better than the first one. And, at least in this case, it kind of worked. While London Has Fallen still isn’t a good movie, it’s a touch better than the original for a few key reasons.

The first reason is the pacing. At under 100 minutes, London Has Fallen moves at a quick enough pace to ensure that we never stop to consider much of anything. It’s a good 20 minutes shorter than the original, and being shorter definitely helps. Its action isn’t anything special, save for one sequence that uses a faux one-take gimmick that makes it stand out, but, for the most part, it’s passable.

London Has Fallen is a mediocre-at-best action movie that moves through its almost nonexistent plot quick enough to not be bothersome, and that’s as much praise as it’s going to get from me.

London Has Fallen also has a less serious tone than the first one. There are a couple of jokes and the violence often feels cartoonish, not graphic. It’s silly and it knows it’s silly, and that makes the experience feel lighter for the audience. Now, that comes with its own problem, which sees it trying and fail to reconcile that tone with some potentially serious politics – the villain is a Middle Eastern terrorist looking for revenge after a collateral damaging drone strike – but since the film’s idea of “politics” is “blow up everything; America is awesome,” this might be for the best.

Gerard Butler, fresh off a terrible hammy performance in Gods of Egypt, reminds us in London Has Fallen that his inability to hide his thick Scottish accent is a detriment to his potential to play American characters. It was bad in Olympus Has Fallen, but it might be even worse here. He’s fine at the action and at spitting out one-liners, but when it comes to saying lines longer than a few words, he’s just awful. Aaron Eckhart is fine and actually gets in on the action a bit this time. Morgan Freeman returns as the Vice President, but he’s mostly here as an expositional tool. Worse off are actors like Robert Forster, Melissa Leo, and Jackie Earle Haley, who get almost nothing to do and feel incredibly wasted.

For a blockbuster action movie, London Has Fallen feels cheap. Its production values are low, many of the special effects are dodgy – there’s a helicopter shot in the trailer that’s laughably bad and feels even worse in the context of the film – and the climax is awful on all fronts. The budget was reportedly slightly lower than the first film, which makes sense for the studio but not for the audience or for director Babak Najafi‘s ambition.

Nobody’s going to be winning any awards for London Has Fallen, and I don’t think it’s a good movie, but it’s a more tolerable exercise than its predecessor because it has better pacing and a less serious tone. It has low production values, a bad lead actor in Gerard Butler, and it’s easy to question its politics, but I didn’t out-and-out hate it. London Has Fallen is a mediocre-at-best action movie that moves through its almost nonexistent plot quick enough to not be bothersome, and that’s as much praise as it’s going to get from me.

Bottom Line: London Has Fallen probably shouldn’t exist, but it’s a marginal improvement over its predecessor.

Recommendation: You don’t need to see London Has Fallen, but it could’ve been way worse.