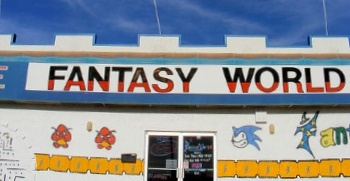 A Texas arcade owner is looking to offload his business, and not for the reason you expect.

This week, US arcade enthusiasts (Bemani fans in particular) mourned the loss of one of its best game centers, Tokyo Game Action, located in Wichendon, Massachusetts. Drowning in both massive debt and December rains, losing not only TGA, but another noteworthy arcade, has dealt yet another powerful blow to a community of gamers who still greatly enjoy the social experiences that only arcades can still offer. So when Arcade Heroes broke word of an owner putting up his business on eBay, I feared the worst. Shockingly, it’s not because he can’t afford it. Quite the contrary, business is actually booming. He’s just looking for something new.

With a bidding price of $760.00 as of press time (with a reserve not yet met), Fantasy World of Abilene, Texas can be yours to own relatively on the cheap. The owner, Doug, purchased the place in 2003, as it had been his hangout of choice in his high school years. He’s run the business for six years but feels its time to go.

“I really don’t want to just auction off the games and close the doors,” explains Doug on his listing. “I put a lot of work in to this place. I’ve learned a lot about this business (enough that I’m a columnist for RePlay magazine), but six years is a long time to do the same thing.”

Boasting its best profits in its nearly six year history (the owner claims at 78% increase in January profits month-over-year), would-be owners would be picking up an appealing business (for an arcade, anyway) that is already set for operation on day one. I’d do it, as I’ve often dreamed of opening up one myself, but Texas just isn’t my style. Here’s hoping that whomever decides to take over the reigns of Fantasy World is successful as we could really do with more positive stories regarding the business.