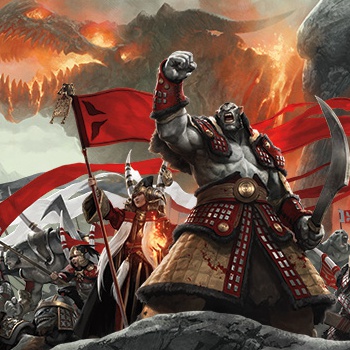 While details are still scarce, the set’s lead designer promises the return of a “long absent” fan-favorite mechanic.

The next block of perennial CCG Magic: The Gathering kicks off in late September, with Khans of Tarkir. With an aesthetic that evokes the Mongol huns, Khans of Tarkir takes place on the war-torn homeworld of Sarkhan Vol, one of the numerous planeswalkers that are often at the center of the game’s story.

Khans, the first of the three set block, will launch on on September 26, with prerelease events occurring on Sept. 20 and 21. There will be a total of 269 cards in the Khans set.

Developer Wizards of the Coast hasn’t let a whole lot of other details slip at this point. On a YouTube video posted by Wizards of the Coast, Khans and Magic lead designer Mark Rosewater said players could expect a “large, small, large,” pattern for the three sets in the block.

The only other detail Rosewater would share is that, after many fan requests, the team is “finally bringing something back after a long absence in Magic,” as well as a new feature fans have requested that has never been seen in the game before.

Also on the team is lead developer Eric Lauer, who most recently worked on the 2011 Innistrad block and this past September’s Theros block.