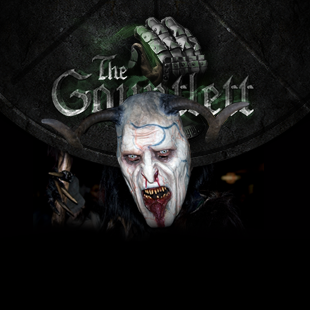 The Christmas Scenario is the kind of thing that sounds like a good idea, and frequently isn’t. I used to play in an AD&D game where the seasonal adventure was pretty much unavoidable, and we always ended up in snowball fights and singing carols with Man-Eating Triffids. No, I couldn’t tell you why. The DM had a thing for Triffids. Also Cybermen. Ho ho ho.

However if you’re determined to have a Yuletide event in your campaign but aren’t sure what to do with it, let’s talk through some of the possibilities. When faced with this kind of dilemma I turn to folklore for a solution; there’s usually something I hadn’t considered, or a germ of an idea hidden away in those old stories that I can use in my new ones. So what’s Christmas folklore got to tell us?

Broadly speaking, there are two kinds of Christmas tradition. The first, the fun one, is the Saturnalia. It derives from the Roman mid-December festival celebrating the turning of the year, and is marked by feasts, festivity, and gift-giving. The gifts were often dolls, so the doll makers – the Sigillari – got a festival day of their own, the Sigillaria, at the end of the Saturnalia. The Saturnalia is also a time of misrule, where all the usual laws are upended. The courts suspend all punishments, schools close, there are masquerades of all kinds, lights, and the Lord of Misrule presides over all. Sometimes called the Abbot of Misreason in medieval tales, this temporary king – often someone of low rank, a peasant or a commoner – is in complete command and directs all the festivities until the final feast day. During this period masters serve their servants, and the usual privileges of rank and birth are reversed.

The other is more sinister, derives from Northern European traditions, and concerns itself with the lengthening of days at the end of the year, when the sun is by no means guaranteed to return. This is when the dead rise up from their graves to visit the living, and when the Wild Hunt rides amid the winter storms. This is the season of blood sacrifice, when a liberal scattering of gore is meant to bring luck or make the sun come back, and when feasts are held to honor your long-dead ancestors, often in hope that your ancestors will attend.

The Wild Hunt is known in one form or another over the entire world, and often the Hunter is linked with sinners, the Devil, or ancient gods. While it is possible to get on the Hunt’s good side by helping it track down its victim, any reward the helper might get for doing so is usually cursed. The Huntsman is sometimes called Hellequin, a name we’ve changed to Harlequin; in his medieval form he led an army of the damned, but as Harlequin he’s more a devilish clown, seducer and thief. His chief characteristic is incredible, nigh superhuman dexterity, useful for clowning, but highly dangerous in a combatant. 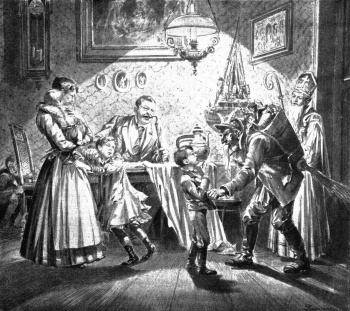 With all that in mind, let’s assume that the game in question is a fairly typical fantasy campaign, with the usual assortment of wizards, heroes, elves, dwarves and dragons; the sort of place that Roy, Elan, Haley, Vaarsuvius, Belkar, and whoever the heck is inhabiting Durkon’s moldering corpse would recognize. What kind of Christmas scenarios could we throw at them?

Say one of them – preferably the least responsible, most carefree player – is elected Abbot of Misrule, with complete control over all the festivities in the town. He can’t have anyone killed or permanently injured, since that goes against the spirit of the festival, but if he wants to build a house entirely of cheese, or ban clothes for the duration of the festivities, go to it. That kind of story almost doesn’t need the DM’s involvement, since the Abbot will probably come into conflict with his fellow players almost immediately. However, for a subplot, say that an enemy – preferably one who’s come into conflict with the players before – decides that this is the perfect time to assassinate the very same character who’s been elected Abbot. Now the group has to defend their mischief-making comrade, but they have to do it without drawing any attention to themselves, since anything so serious as actual combat, or worse, death, will spoil the celebrations and bring bad luck on the town for the next year.

A possible variant to the above is, rather than have an assassin, use a sinister toymaker instead. This callous wizard uses his magical dolls to commit thefts, trying to gather as much cash as possible before the festival comes to an end. It’s up to the Abbot of Misrule to solve this mystery since, for the duration of the festival, he’s in charge of everything. However he can’t get involved in bloody combat or actually hurt anyone, since that goes against the spirit of the season. The toymaker isn’t bound by any holiday rules, and can do as he likes.

Or perhaps the group takes shelter in a small village during a terrific storm, at the height of which the Wild Hunt is seen tearing through the sky. At the end of it the villagers are horrified to discover that the graveyard has been demolished, and the bones of many of their dead taken, presumably by the Hunt. Without those bones the ancestors won’t come back for the solstice feast, or grant their blessings and protection to the villagers. The local lord offers a reward to anyone willing to challenge the Wild Hunt and get the dead back in their rightful graves. Will the heroes face down the Wild Hunt directly, or strike some kind of bargain for the village’s ancestors? Why did the Hunt take those bones; was it some kind of recruitment drive?

While I enjoy fantasy games, I haven’t played them for a while. Dungeons and Dragons is a distant memory for me; I’m fonder of horror titles like Call or Trail of Cthulhu. Say one of those settings were to be used for a Christmas tale; what would that tale be?

If this is a New England tale, perhaps in Lovecraft’s Arkham, you have the added advantage of Puritanism. The Puritans hated Christmas and all it stood for, condemning mirth, and the pagan Misrule that came with it. Even mince pies and pudding were considered dangerous, and there was no better way to make yourself unpopular than to be someone who celebrated the season, a Christmas Keeper. In the 1600s if you were found guilty of celebrating on Christmas Day you were excommunicated from the church, had your ears clipped, and spent time in the stocks; in 1644 Christmas was banned altogether. The fight against Christmas in New England was long and bitter, and though the law against Christmas was repealed in 1681 there was still a strong popular feeling against the holiday for many decades afterward.

Picture a New England town blasted by snowstorms, the like of which hasn’t been seen in over fifty years. The local Historical Society is determined to hold its Christmas celebration come what may, but someone or something seems hell-bent on preventing it. There are several nasty incidents, culminating in a gory assault on one of the Society’s volunteers, who was setting up decorations when he was attacked. When discovered, the now earless victim has a few ragged scraps of clothing in his hands, and long-dead flesh scrapings under his fingernails. What really happened to him, and can this madman be stopped before a tragedy happens?

Or let’s say it’s a Harlequin story, and this time let’s make it slightly more science fiction. I’m going to assume for the purposes of this outline that the game world is futuristic, with all the cybernetics and artificial intelligence that implies, but still remembers its historic past, or at least has records to clue the characters in as to what’s happening. This could also suit a superhero game.

The Harlequin in this story is an artificially intelligent humanoid with superhuman reflexes, capable of doing a lot of damage. In a Cyberpunk setting this could also be someone with cyberpsychosis, though a much milder form than usual. This Harlequin believes it is on stage, performing, all the time. It wants to make fun of its master, the buffoonish old man, and make love to its beloved Columbine. Trouble is, its short term memory is completely fried. It can’t remember who its master is, or its Columbine, so it assumes everyone it meets must be one or the other. There are three typical master types for Harlequin, the Doctor, the Wealthy Man, and the Mysterious Swordsman, a mercenary military character and secret coward. Harlequin will attempt to best the pedant Doctor in debate, show up the Swordsman for the coward he is, steal the Wealthy Man’s money, and make sweet love to his Columbine. The characters are tasked with capturing, not destroying, Harlequin; its former owners, or the law, want it back in good condition. Perhaps one way to do that is to let the Harlequin win, but that could turn into a race against time as the characters struggle to ensure Harlequin wins the debate, steals the money, bests the Swordsman and woos Columbine, all before its short term memory gives out and the process has to begin again.

Whether or not you choose to play a Christmas scenario, here’s hoping your holiday season’s a good one!