Perhaps it is just gaming’s silly season – post-E3 and pre-autumn games rush, maybe there was just nothing else to talk about. Or maybe we gamers, ironically given the vast amounts of blood, guns, cursing and boobs we wade through in our medium, have become hypersensitive. Whatever the cause, the reporting of two tempests in teacups – Orson Scott Card’s involvement in Shadow Complex, and the appearance of a potentially racist reference in Scribblenauts – is a worrying trend that could lead to serious repercussions on what we see in our games.

First we saw hand-wringing over whether or not to boycott Shadow Complex, Chair Entertainment’s intriguing Xbox Live Arcade Metroid-like title, because of the involvement of Orson Scott Card. Card, one of sci-fi’s most acclaimed authors of modern times, has written on many political issues, but the one that sparked controversy on this occasion were his views on homosexuality. To wit, he opposes it, and gay marriage, somewhat vehemently, which led to suggestions of a boycott of the game by some as a statement of opposition.

Judging by the success of Shadow Complex, which broke Xbox Live Arcade sales records in its first week, any boycott would have little effect on the bottom line. But it did get column mentions – lots of them – that all but overshadowed every other aspect of the game. And while refusal to purchase games they may find disagreeable is every gamer’s right, the coverage of the issue seemed to turn the whispers of a select few into an unnecessary roar.

It’s one thing to avoid a game because it encourages a certain way of thinking that some people might find offensive – not that more than a handful of these games actually exist in the controversy-phobic games industry. But no one made the claimed that Shadow Complex encourages homophobia or has any anti-gay message.

Alternatively, if Card were the creative director or the CEO of Chair, or if his primary business was actively campaigning against gay marriage by, say, leading a political party or lobby opposed to it, then I might be able to understand this. But Card had no more than a peripheral involvement in the game at best, much as he did with The Secret of Monkey Island and The Dig, two games that were obviously released in more sensible times as to have escaped this so-called controversy.

There is something uncomfortable about the soul-searching over Shadow Complex, or the suggestions that gamers who are offended by Card’s involvement purchase the game “but offset the hate” by donating to a gay charity. From the amount of racists, homophobes, sexists and outright assholes I’ve met in this industry, and the size of teams these days, I would say there’s someone on every game you’ve ever enjoyed whose opinions would make you apoplectic. And I would wager the same goes for every movie you’ve watched, every piece of electronics you’ve purchased, and every sports team you follow.

At what point should we start boycotts because we disagree with the opinions of a certain percentage of the people making it? Should we stop listening to Wagner’s operas because of his deplorable thoughts on Judaism? Should Republicans stop going to see movies made by Democratic supporters, and vice-versa?

But the most unsettling thing is that the controversy was triggered by what seems to be no more than a handful of gamers on the Internet forum NeoGAF. At least the Resident Evil 5 controversy, as misunderstood by all sides as it was, was kicked off by the writings of N’Gai Croal, one of gaming media’s most prolific figures, and involved the eagerly-awaited sequel to one of the most high-profile brands in gaming. Is this just a case of the squeaky wheel getting oiled? 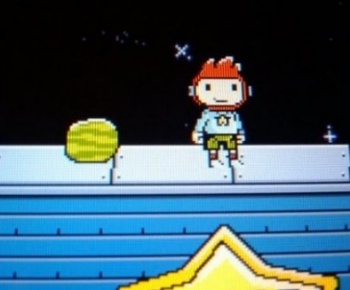 But there wasn’t even time for anyone to get offended by the latest controversy, last week’s Scribblenauts affair- something I am loathe to even give a summary of here because I honestly do not understand it. (Here’s the Escapist’s take on it, which certainly seems like one of their fairer readings of the subject.)

Even more so than the Card issue, there did not seem to be any actual uproar at all before the story was reported – there was no collection of gamers protesting it, no one burning copies of Scribblenauts in the streets or sending death threats to 5th Cell’s offices. There was, instead, only a potential for offense, something in the game which could cause anger if you choose to view it in a certain light. An obscure racial reference which no one seems to actually believe was intentional, and which at worst showed that the developer needed to pay more attention to their content (though what it presumably shows is that no one on the development team was aware of the racial references – is not knowing racist references something to be ashamed of now?).

Time was, someone actually had to get offended by something before a controversy existed. We in the gaming industry, never the most patient of types, are now creating controversies where the mere possibility of offense exists. It doesn’t matter whether people are actually offended by it, or if they’re a mere statistical aberration – and while I’m certain there are people who take genuine offense to both Card’s contribution to Shadow Complex and the Scribblenauts affair, you can always find people to take offense to anything. There are people who are genuinely offended by the amount of blood and killing in most major first person titles. Will we be seeing articles about these people when Modern Warfare 2 is released? Somehow, I doubt it.

The worst part of this whole affair is that both Shadow Complex and Scribblenauts are brave and ambitious products attempting to do a lot with very little. They are the kind of titles we in the industry should be supporting, not building non-existent controversy over. And while for these two titles, at least, the publicity will probably be good for sales in the short term, it sets a worrying precedent for future titles.

To put it another way – when we get up in arms about the mere possibility for offense in our videogames, is it any wonder that we end up with so many bland and inoffensive products?

Valid or not, the tabloidization of our media is going to lead to risk-wary publishers increasingly going for the safe decision. Why risk a $30 million project with something that could offend a sliver of society – a gay main character, say – when you can just go for the bald gruff space marine and avoid the issue entirely? Just as with our politicians, who have inevitably become bland and predictable because they are lambasted for saying anything vaguely controversial, so too will our videogames become ever more safe and dull, so long as the risk exists that sales will be affected by unnecessary controversies.

I firmly believe that videogames are art, and as art, not alone should they not be afraid to offend, they should actively seek to challenge popular opinion and the status quo. There are so many more things to be offended by in the games industry – price gouging, the glacial rate of progress, the monopolistic practices of first parties – that the column inches devoted to these topics make cable news networks look intelligent. If we’re boycotting anything, please let it be the further tabloidization of our medium.

Christian Ward works for a major publisher, and wonders if Advent Rising could have used a good controversy.