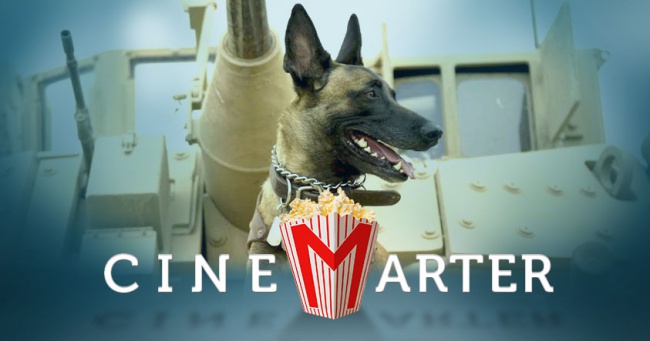 The second dog-centric movie of 2015 – after the fantastic White God – comes to us in the form of Max, a movie in which a dog gets PTSD, is adopted by a family, and then helps solve all of their issues. If you come from a somewhat dysfunctional family with an annoying teenager, a hardened military father, and a nonentity of a mother, just get a dog and all of your problems will be solved! I’m pretty sure that’s what Max‘s message is, anyway. It’s not like a movie about a dog that served in the American military would have any other purpose, right?

So, yes, “Max” refers to a dog who served in the military, had his handler (Robbie Amell) killed in an ambush, returned to America with dog-PTSD, and is adopted by his handler’s family. The teenager is Justin (Josh Wiggins), the father is Ray (Thomas Haden Church), and the mother is Pamela (Lauren Graham). Full disclosure: I had to look up the names of these people on the internet. They resonated with me so little that remembering that their characters were given names was too strenuous a task for my brain. They’re stereotypes who exist to be fixed by the dog – and even then, that’s only somewhat successful. 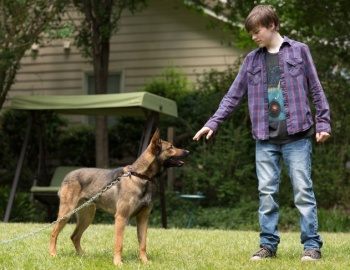 What’s perhaps oddest about Max is that it eventually turns into this weird mystery-thriller in its second act, and uses that event – not so much the dog – to bring the family closer together. There’s a villain who’s so clearly the villain from scene one that when the film reveals that he’s the bad guy, you roll your eyes at how that was supposed to be a surprise. And the villain really, really hates Max, because dogs are good judges of character, someone at one point says in the film. He’s a cartoonish central villain.

As Max plays, the frequency with which I rolled my eyes and yearned for it to be over increased. It gets sillier, it gets cheesier, it gets more manipulative, and it becomes somehow more formulaic than just a brief plot overview makes it feel. It’s hard to imagine any adult taking it seriously or having it resonate with them at all, but then people are suckers for animals in movies, and Max has a pretty decent one in the form of its leading dog.

Think of a manipulative scene the film could throw your way, and it’s probably in there.

In fact, the dog is so good, and so well-trained, that you wind up wishing it focused solely on him and his struggle to adjust to non-military life. Instead, our lead is the moody teenager played by Josh Wiggins, here looking so completely lost that he never properly reacts to anything that’s going on. He looks mildly amused when his life is in danger, sadder and moodier before his brother dies, and essentially a statue whenever an “emotional” moment is supposed to be happening. He’s one of the worst leading child actors in a while, and that’s really saying something.

Max wants us to care about this family and the dog, and it tries its hardest to make that happen. Think of a manipulative scene the film could throw your way, and it’s probably in there. Add in the military aspect – which means if you dislike it, you automatically “hate the military”; just ask anyone who hated American Sniper – and you’re basically forced into liking Max. But it’s not engaging. It’s not interesting. It doesn’t have a single exciting, emotionally resonant, or poignant moment. It’s flat, it’s clichéd, and its dog is a better actor than the humans. 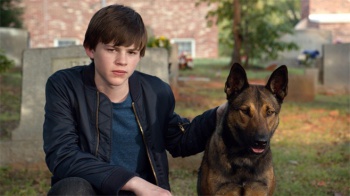 For whom has Max been created? Young children will get scared by its dog-on-dog violence and the thriller aspect to its plot, older children will roll their eyes at its schmaltz and cheese, and adults will find its complete lack of, well, anything to be off-putting and boring. It wants to be this crowd-pleasing thing, but director Boaz Yakin doesn’t have any idea how to do that except by throwing endless clichés our way. Sorry, Max, but the only thing you’ll be remembered for is ensuring that we have to make sure we specify between you and Mad Max: Fury Road.

Bottom Line: Sickeningly manipulative and cheesy, Max is left without an audience who will enjoy it.

Recommendation: It’s hard to think of anyone who would enjoy Max, unless seeing a well-trained dog in a movie allows you to ignore all of its problems.