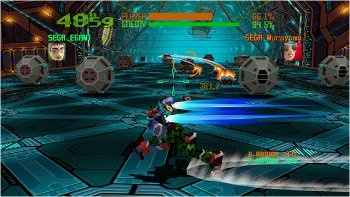 Mecha have dominated the Japanese pop-cultural consciousness for over half a century. Fundamentally, these imaginary machines can be defined as large humanoid-shaped weapons that are piloted either from within a cockpit or via remote control. That may sound straightforward, but the mythos is anything but, with hugely varied interpretations of that basic premise.

This produces a very interesting functional foundation when applied to videogames. Basic questions like how mecha move or how they’re controlled can have wildly different answers depending on the title. That’s not to say the mythos tolerates a mechanical free-for-all – if anything it’s quite the opposite, as the rulesets used in anime and manga are frequently quite exacting.

However, in the field of mecha games there are a few beacons that have shone through the mist of complexity to distill the functional facets of mecha into gameplay that anyone can appreciate. The following is a quick snapshot of those games that have influenced the genre and gaming as a whole.

The Virtual On series approaches mecha in terms of how they move in a combat situation. The main functional premise is based on fixed-length dashes that connect ranged and melee combat – players effectively dance around each other looking for an opening, and a single missed dash can spell disaster. The games’ use of a custom twin-stick control setup also adds to the sense that you are a pilot rather than just a gamer. Games like Zone of the Enders and Another Century’s Episode owe a lot to the dash mechanics seen in the Virtual On games, as they use a very similar mechanic.

Unlike Virtual On, the Armored Core series approaches the defining aspect of mecha as machines that are constructed based on their pilots’ specifications rather than pre-built craft to which pilots must adapt. The series has since become the mecha equivalent of Lego, as it allows players to build and paint their own mecha in a remarkably personal way. Like the construction of the mecha themselves, Armored Core‘s combat affords greater freedom of movement to the player than other mecha games. The series’ impact has been more general across the genre as a whole than Virtual On‘s, but its lasting appeal is nonetheless impressive.

Remote Control Dandy focused on the earliest generation of super robots like Tetsujin 28-go/Gigantor, which, as the name might imply, were piloted from outside the machines themselves via remote control. This imparted the game with a unique sense of scale, as you followed your mecha on the street level while you controlled it. The control mechanics were atypical as well, as they allowed players to control their machines’ limbs individually – you actually had to move each leg in sequence in order to make your mecha walk. Other games, like the Earth Defense Force series, have followed Remote Control Dandy‘s lead, especially with regards to its sense of scale.

When Polyphony Digital broke ranks on their hugely popular Gran Turismo series, they chose to make their mark on mecha gaming. Utilizing the expertise of a former Panzer Dragoon Zwei coder Yuji Yasuhara, Omega Boost at its core is a focused shooter with an emphasis on elaborate missile volleys to dispatch targets. The main difference between Panzer Dragoon and Omega Boost, though, is that the latter wasn’t on rails – in Omega Boost the player can fly anywhere within a three-dimensional space. This opens up the game to interpret the epic space-based dogfights that have been a mainstay of various Macross series. Unsurprisingly, the same mecha designer that helmed Macross, Shoji Kawamori, was also responsible for the creation of the Omega Boost mecha itself. 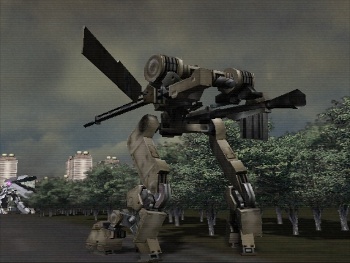 In Steel Battalion, Capcom and Nudemaker approached mecha gaming in a distinctly uncompromising manner. The game hinges on a massive multi-button controller that allows the player to pilot a large bipedal mecha known as a “vertical tank.” Resolutely focused on the “real robot” end of the mecha genre, Steel Battalion takes the arcade setup of games like Armored Core and turns it into a very exacting simulation. From the need to wash your viewing cameras when they get dirty to hitting the eject button as your mecha explodes around you, the game accounts for pretty much every theoretical aspect of piloting a giant fighting robot. It was ferociously hard as well, with enemies able to dispense you with terrifying one-shot ease. As such, Steel Battalion and its sequel, Line of Contact, are now very much the touchstone for mecha simulation.

Forget Command & Conquer – Technosoft’s Herzog series is where the RTS genre started. In Herzog, players control transformable mecha from an aerial perspective and can also create units and protect bases over a large map. The original Herzog is quite simplistic, but its sequel, Zwei, manages to use more of the Genesis’ technical superiority to make the gameplay a bit more involved. Zwei also received a Western release, one that curiously pre-dates all of Westwood’s early RTS efforts.

Niche developer Treasure approached the original Bangai-O almost as a reaction to shmup elements seen in Leynos II on the Saturn. As in Leynos II, the camera pulls out when the action kicks off, effectively prioritizing the mecha’s abilities over its appearance. Treasure used the lesser-known Hover Attack as a reference point, which treats its protagonist as a miniscule dot on the gaming horizon and allows greater screen space for the titular Bangai-O to fill the screen with hundreds of missiles. Using anime references from Macross, Layzner and Ideon, Bangai-O approaches mecha based around what they can do rather than what they happen to look like.

Unlike the other games listed here, Carnage Heart doesn’t allow players to directly control their mecha, called Overkill Engines. Instead, players have to program their A.I. to accomplish certain tasks and survive specific scenarios. This means Carnage Heart is more about setting up your mecha to deal with different contingencies in order for it to survive in battle than it is about taking control yourself as a pilot. Though not entirely successful, it was a unique and interesting premise that birthed a number of sequels, including games like the original Armored Core Formula Front.

Despite mecha games’ obvious and slightly misleading aesthetic commonality, the above examples show it’s a remarkably diverse and unique genre in terms of gameplay. So to all those who would believe that one giant robot is just like any other in terms of how it moves, operates and fights, you might want to look again – you’ll find they’re more than meets the eye.

Ollie Barder works as a Senior Games Designer at doublesix and helms the mecha gaming blog Mecha Damashii. In his spare time he plays lots of games and dusts an ever-growing collection of die-cast robot toys.