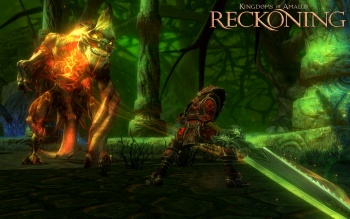 The plan is an ambitious one. An all-star baseball player and videogame geek assembles a crack team to create a blockbuster MMOG that plans to rival anything that Blizzard, SOE or Cryptic has to offer. Schilling’s 38 Studios purchased veteran design house, Big Huge Games, to make a single-player RPG as a prelude to the big MMOG project. Kingdoms of Amalur: Reckoning is slated for a Fall 2011 release, and EA has signed on to publish it and help with marketing. That machine began down in San Diego Comic Con and continued at Gen Con this past weekend in Indianapolis. Through it all, the one constant has been the desire to create a living, breathing world that aims to have story consequences for one of the most glaringly unrealistic mechanics in most games; the fact that you can die and come back to life is explained in Amalur by something called the “Well of Souls”. But I’m getting ahead of myself.

I’m not easily star-struck. But when I met with Curt Schilling, R. A. Salvatore and Mark Nelson from Big Huge Games at Comic Con, I realized that this was group of guys that I admire for very different reasons. R. A. Salvatore is arguably the most successful fantasist of our generation, with a slew of New York Times bestsellers starring the iconic Drizzt Do’Urden. Curt Schilling was the hero of my favorite baseball team as they slew the Yankee dragon in 2004, all while being a huge Everquest gamer. And Mark Nelson, even though his name isn’t instantly recognizable, is responsible for one of the greatest CRPGs of this decade, Oblivion. All three of these gentlemen are at the top of their game. How the hell does this collaboration work?

Very easily, apparently: “It’s about the easiest job I’ve ever had,” Nelson says. “It has really been a piece of cake. [Salvatore] wrote 10,000 years of backstory and we just got handed this bible and were told, ‘Pick a place that looks fun, set a game anywhere in that history and go to town on it.’ It’s been so great. All of these guys have been so accessible and easy to work with.”

Schilling was quick to jump in to explain. The 10,000 years of history for the world of Amalur was written by Salvatore and presented to the team a few months after he joined 38 Studios. “[R. A.] shows up to the studio, and we go to the auditorium and basically we got Storytime with R. A. Salvatore,” Schiling says with obvious nerd glee and excitement. “He created these leather-bound books that was a year-by-year timeline of Amalur. Not only that, but it had a full slideshow with the presentation. We were getting walked through the history of the world that he created and that we’re asking people to live in. When we say 10,000 year history, it’s not like, ‘Here’s Year One and we’re at Year 10,000 and some stuff happened.’ It’s a decade-by-decade timeline of iconic moments and events, the races, the heroes, the villains. Those are all spelled out in intricate detail in this huge backstory.” 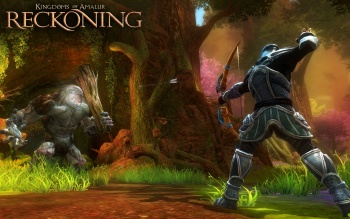 “Well, they are now,” R. A. Salvatore interjects. “I really don’t write 300,000 words an hours. But more important than this 10,000 year history is the details. It wasn’t all that detailed, because what I was really trying to give [the designers] were the tools to add to it. ‘This is what you have to keep in mind when you add to this history. These are the themes.'” What began as a detailed skeleton is now being fleshed out by every designer, writer and artist at 38 Studios into a ginormous wiki. That first document created by Salvatore allowed “everybody to paint on the same canvas.”

Despite hearing about how this backstory was created, they were all very tight-lipped as to what the story of Reckoning is all about. The trailer, released at Comic Con, doesn’t give very many clues. Here’s what I do know: Reckoning is set during the Age of Arcana. The title of Reckoning means something very personal to the characters in the game, but when I asked for more details, the PR handlers went nuts. Apparently, Schilling wants to talk and geek out with people who are interested, but he realizes that in the current climate of games marketing, it is better to leave us wanting more.

“Amalur Reckoning is launching in Fall of 2011. We’re not going to show up at launch day and give you a game and let you figure it all out. We’re going to be telling you, over the next 14 or so months, all of these things that we feel that we need to arm you and equip you with in order for you to be interested before we launch the product,” Schilling says. “But that’s a game in and of itself.” For now, the team is holding their cards close to their chest, but there is one detail that I find very interesting about the game world of Amalur that I’m already excited to explore: The Well of Souls.

Every MMOG has the mechanic that when you die, you can be brought back to life. But none of them adequately explain why or how, or more importantly, what that means. In the world of Amalur, certain factions have created an artifact that allows souls to live forever by inhabiting new bodies. That is a cool enough idea on its own, but that’s not enough for R. A. Salvatore. He wants to really explore the idea through games set in this world by imagining what effect such a feature has on every level of society. “In the MMOG, you don’t spawn in a graveyard, you’ll spawn in the Well of Souls. [You might learn] why we have the Well of Souls, here’s how we have the Well of Souls. That’s not enough for me. That’s putting a name on something, and that’s a good first step, but anyone can do that,” Salvatore says, with a calm intensity. “What I’m constantly asking the designers is ‘What are the consequences of the Well of Souls?’

“What would be the consequences in our world of suddenly being able to break the eternal bargain of whoever lives must die? What would it mean to the head of the powerful church, who’s fabulously wealthy and incredibly powerful because of that mortal bargain? You just took his power base away. Beyond that, what about the peasants in this world? What about the mother who believes in this afterlife idea? That gets her through the day. But her son was killed, and she was thinking that when she dies that she will see him again. But now, she is told, ‘You don’t have to go.’ What would that do to a person?” 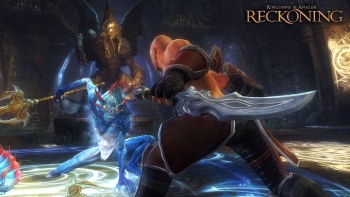 Wait, isn't that a murloc?

In the world of Amalur, these are the kinds of ideas that you will be faced with as you play through the rich world that R. A. Salvatore has created. How you play the single layer experience of Reckoning, though, has a lot more to do with Mark Nelson. Reckoning is intended to be an open-world RPG and Big Huge Games will draw on the experience of its team to deliver on that promise, while still leaving breadcrumbs teasingly leading to the fun. “Ken Rolston, lead designer on Morrowind and Oblivion, and I have been making open world style games for a long time,” Mark Nelson says. “We don’t want to stray too far from what we know how to do well. But there are certainly things we want to do differently as well. It is clearly an open world. We want it to feel like a living breathing, contiguous world because that’s half the fun, just heading out into the wilderness and seeing what you can find.”

I asked him whether there is ever the worry that this style of game can get too open world. “That’s one of the things that we talked about a lot when we started working on Reckoning. A lot of people have that same reaction to open world games, they don’t feel like they have enough direction on where they are supposed to go,” Mark says.

“That’s just an open world game for the sake of it being open world,” Schilling says. “That’s not what we want to do.”

Mark continues, “We want to point you towards the fun. We don’t want that to take more than a few seconds.” One of the ways that Reckoning will do that is through more visual cues. “There’s a path that leads somewhere. Every time that I see a path, I want to know that that leads to content. It needs to be obvious to the player.”

Schilling and R. A. Salvatore were at Comic Con, and then made the decision to travel to Gen Con in Indianapolis, where a lot of videogame companies failed to tread this year. There was no Sony Online Entertainment or BioWare or even Blizzard, beyond the WoW TCG. That means that 38 Studios is committed to getting the word out to potential fans of their games in ways that other companies aren’t. But perhaps that’s because Schilling has the team that can sell to these audiences in a unique way. “We had Todd MacFarlane at Comic Con. We have R. A. Salvatore at Gen Con,” Schilling says. “I think our industry doesn’t realize that 99% of the people here [at Gen Con] and at Comic Con are gamers. They are the target bullseye audience for somebody’s software somewhere.” Schilling realizes it and he has the tools to exploit that audience in Salvatore and MacFarlane.

From the point of view of player of both RPGs and MMOGs, as well as a fantasy geek impressed with Salvatore’s ideas about consequences, it seems that all of the pieces are falling into place for me to like Reckoning when it comes out. As Schilling and the rest of the team continue their marketing trek to Gen Con in Indianapolis, they released more screenshots and tidbits that will try to tease out what will make this game special. Even though he’s not a veteran of the gaming industry as he is in the baseball world, Schilling has so far said the right things and he’s assembled the right team of wonderfully creative people like Salvatore and Mark Nelson. For Reckoning to be successful, he’s got to continue to play the game of marketing and spin to keep gamers interested over the next 14 months.

Then 38 Studios has to start all over again when the MMOG is released. But at least, by then, Schilling will no longer be a rookie.

Greg Tito asked Schilling once whether Manny Ramirez was a gamer in both senses of the word and the response was a snort. “No.”