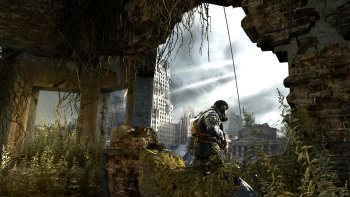 When I last saw Metro: Last Light at E3 2011, I wasn’t overwhelmed. Sure, it looked like a fun shooter, but there were a lot of fun shooters on the show floor, and it didn’t stand out to me. That was nearly two years ago; since then, Last Light was delayed by THQ, found itself in the hands of new publisher Deep Silver, and is now scheduled for a May release. The post-apocalyptic FPS was on display at PAX East this weekend, and I had the opportunity to play it for about 40 minutes, getting a better sense of its gameplay, environments, and survival horror elements. I left my second viewing of the game far more impressed than my first.

Though Metro: Last Light is being touted as a narrative-driven, atmospheric first-person shooter, I didn’t get to see much of the story during my gameplay session. Instead, I hopped right into the first level, called Revolution, in which protagonist Artyom makes his way through darkened rooms and hallways trying to avoid being shot by the plentiful enemies who never seemed to know I was there until I started shooting. Perhaps I should have been a bit stealthier, and I did have a vague sense that Last Light was trying to encourage a more careful approach, but I never felt like it was punishing me for engaging in outright firefights. I went through more ammo that way, but there was enough to collect from the corpses of fallen foes that I never really felt like it was in short supply.

The controls are pretty intuitive for anyone who’s ever played a first-person shooter, though there were a few unique mechanics. At some points, Artyom began wheezing, which indicated that a gas mask was needed to survive the hazardous environment. Filters for gas masks can be picked up along with ammo and new weapons as you explore, with a timer always counting down until you’re out of air; each filter only gives about a few minutes of safety in real time, though not every environment requires the aid of a gas mask. This wrinkle added some depth and urgency to the exploration, as well as the challenge of trying to switch out my gas mask filter while in the midst of a shootout.

The darkened rooms of Revolution sometimes made it difficult to figure out where I was supposed to go, and at times the game did seem annoyingly dark (though, to be fair, I usually jack up the brightness settings on games, so it could just be me). With no natural lighting and few light sources around, Artyom’s lighter was sometimes necessary to see that I was walking down an actual path and not into a wall. Also aiding navigation was the compass, which points you in the right direction without holding your hand and over-explaining. Since Last Light seems to have more off-the-beaten-path exploration than standard shooters (I found myself checking every nook and cranny for ammo and filters), the compass should come in handy.

The second level took a hard turn from the standard FPS environment of Revolution; named Regina after a refugee vehicle that transports you there, the stage is fairly quiet and empty–at least at first. As I drove along the underground railroad of sorts, sound was used to great effect in creating tension. Spider-like mutated creatures skittered around the tunnels so quickly I wondered if I’d really seen them. After hitting a dead end, I had to leave the safety of the vehicle and explore a room off the tunnel, which was full of throbbing egg sacs, corpses, and fully grown versions of those little mutant things that seemed to attack from out of nowhere. These were tougher to kill than the humans of the first level, and without any fallen foes ripe for looting, ammo was much more scarce. This created more of a survival horror atmosphere, which is exactly what the developers are going for. My time with Last Light ended before I could complete the second level, but it left me sufficiently creeped out.

The 40 minutes I spent with Metro: Last Light seemed to fly by; if someone else hadn’t shown up to play, I gladly could have kept going. Despite not being given a lot of context outside of what’s already known about the game, it was easy to jump into the world of Metro and stay there. It’s been a long journey for Metro: Last Light, but despite the snags along the way, it doesn’t seem any worse for the wear. Metro: Last Light is due out in May, and appears to be in good shape for a game just a few weeks away from launch.