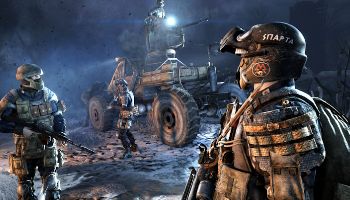 The industry has gone a little bit mad with rereleased content lately, taking the new generation of consoles as an excuse to double dip on videogames that really didn’t launch that long ago. Tomb Raider: Definitive Edition, The Last of Us Remastered, Diablo III: Ultimate Evil Edition, and Warriors Orochi 3 Ultimate have all spilled out this year, with titles like Sleeping Dogs still waiting in the wings for another crack of the whip.

Deep Silver is having its own turn on the remaster Ferris wheel, and while it’s becoming increasingly hard not to get sick of seeing all these second (or third) releases, one can at least say that Metro Redux is by far the best deal, and a package that has benefited quite a bit from the new coat of paint.

Bundling Metro 2033 and Metro: Last Light together in one double bill of depressing bleakness, 4A Games’ book-inspired tale of life in a post-apocalyptic underground railroad is collected comprehensively in a way that basically provides two games for the price of one. For the cost of a single unnecessary double dip in Tomb Raider: Definitive Edition, you get two games, at least one of which is old enough to not feel so galling in its revival.

Metro 2033 is one of the best first-person shooters of the last generation, and I don’t feel like I’m being too hyperbolic with such a claim. With its oppressive, effectively depressing atmosphere, and intimidating outdoors sequences that could easily belong in the survival horror genre, 4A Games’ tale of a young man fighting from haven to haven in the wreckage of the Russian Metro system is captivating as heck, and the experience is no less harrowing a second time around.

Interestingly, Metro Redux offers two ways to experience 2033 – the original, with its sparse resources and tricky stealth segments, and a new mode with “improvements” from its sequel, Last Light. I always preferred the original game’s harsher, slower paced gameplay, and found that Last Light, while a good game, focused too much on shooting and made stealth so easy as to feel almost insulting. It was a solid shooter, but lacked the sense of dread that 2033 could deliver.

The “Spartan” mode in 2033 does not suck the atmosphere out of the experience, I’m glad to say, instead presenting something of a compromise between the original and the sequel. Sneaking is easier, and you won’t run out of bullets half as much as you would before, but enemies still pack a punch, and preying silently on the opposition requires some care.

I enjoyed the Last Light alterations a lot more than I thought I would, and the fact the original settings are still available as a separate mode is perfect, effectively offering these changes as a choice rather than a mandatory requirement. Even if the changes made had hampered the game, I’d have been quite satisfied in seeing the original preserved, and the fact that both settings are quite enjoyable is just dandy.

Of course, the visual upgrades are nice as well! Metro 2033 has always been a beautiful game (in an absolutely dismal and miserable way), with its lighting effects being some of my favorite ever. Redux makes it look more gorgeous than before, though some of the visuals, especially character faces and animations, are undoubtedly, visibly dated by today’s standards.

One other issue is that, despite the tweaks being made, 2033 is still quite a glitchy experience, with graphical errors occurring and the risk of in-game events not triggering when they should. I encountered nothing truly game breaking, but there is some clear messiness popping up from time to time. Also, would it have killed somebody to run the notes that Artyom picks up through a new spellchecker? A severe amount of the fluff text is littered with typos (one of them borders on illegible), moreso than I’ve seen in most games, and it’s a little hard to excuse in a makeover.

Unfortunately, my copy of Metro Redux appears to have not included a playable version of Last Light, but being a more recent release, the improvements aren’t going to be quite so considerable. I can tell you that I did enjoy Last Light when it originally released, but found it undermined a lot of the tension found in 2033, and is an inferior game in comparison.

That said, there’s a great amount of value in having both 2033 and Last Light available for the price of a single title. As I already noted, this package offers two full games for the price of any of the other rereleases this year, and neither one has an original sale date as recent as most of them. From a sheer cost standpoint, this is a great pickup, and it helps that you have one superb and one pretty good title sharing the billing.

Bottom Line: Metro Redux revitalizes the original Metro 2033 in a smart way, offering a choice between the original experience and something more welcoming to newcomers. With the inclusion of Last Light, this is a two-hit punch of some damn fine FPS bleakness.

Recommendation: Unlike most of this year’s visual upgrades, Metro Redux has enough going on to where I could recommend it to both old players and brand new ones. 2033 alone is worth the asking price, and the sequel’s a nice cherry on top.