At first glance it might seem easy to group Metro 2033 under the broad banner of grimy generic modern shooters. Post-nuclear setting, lots of gray and brown industrial environments, two weapons at a time and lots of Russian dudes being killed. But there are a few things that set it apart, like a greater focus on stealth and world building; the fact that every character is Russian (including the non-pricks) and the rather intriguing idea that bullets are used as currency.

In fact, the first time I heard about Metro 2033 was when someone said “Hey, have you heard of this new shooter that’s coming out? It uses ammo as currency.” It’s a concept that easily stands out, and which makes a lot of sense when you think about it. Of course a society based almost entirely around survival on a knife-edge would have an economy based on things that allow you to defend yourself. In our, nice, safe society, it’s the person with the most money we all want to be friends with, but the good times will end very quickly if a giant nuclear rat might jump out at any moment and chew his lungs out.

I do think, however, that the Metro series cops out of the idea on two fronts: firstly, it’s only “special” ammo rounds that can be used as currency, while standard “dirty” rounds are only good for firing. And secondly, there isn’t much you can actually spend the “money” on, except more dirty ammo or weapon upgrades in a pinch.

What that takes away from the concept is the notion of bullets being absolutely central to life, not just survival. It’d be interesting if the same concept were put in a situation where you could spend the bullets on other things that have a gameplay effect. Like if there was a survival mechanic that hinged on regularly eating food, so you had to sacrifice a little bit of your self-defense capability just to survive day to day. Every time you fired off a burst of rounds while in the field, you’d be haunted by visions of the many grilled cheese sandwiches that are now denied to you.

I suppose the bullets-as-money thing appeals to me because I like to see some outside the box thinking, especially when it comes to streamlining the essential processes of a videogame. In a lot of games, you might be able to sell bullets in a shop, and then use the money to buy something else, but see how Metro 2033 cunningly cut out the middle man there.

The thing about gameplay is that it’s all about numbers, and every decision the player makes is essentially an exchange of one number for another. Sometimes that’s obvious, like when they use in-game currency to buy a better weapon or armor, that’s taking a hit to the money number in return for an increase in the attack or defense number. But it applies to simpler gameplay models, too. Even if you’re playing a shooter and all you have is one number for health and one number for ammo, the main purpose of ammo is to be exchanged for continued life. And health is exchanged for ammo when, say, you have to run out into the open to recover pickups. 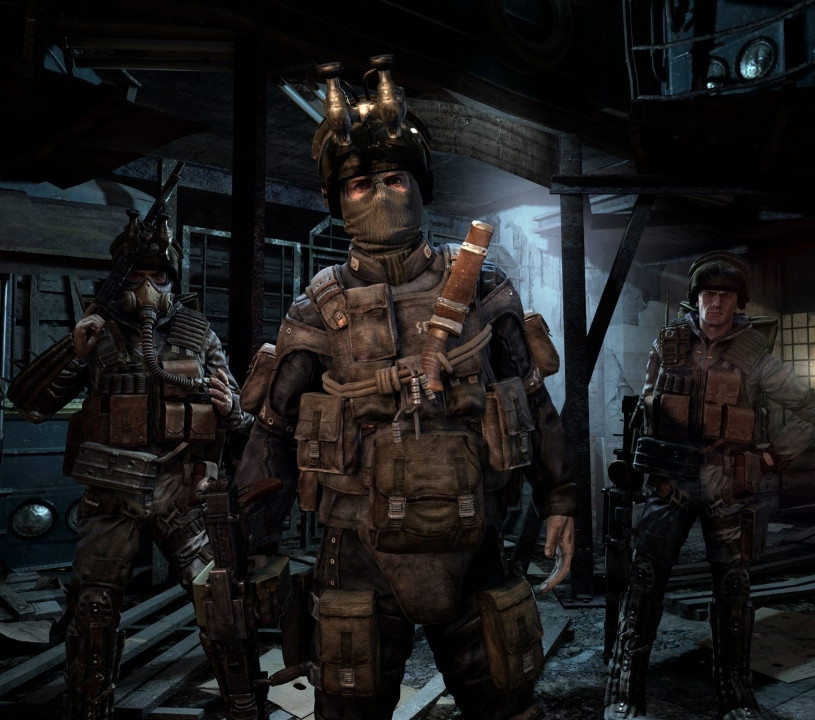 And when you realize that all gameplay mechanics are exchanging one number for another, you can start to come up with all sorts of innovative ideas for non-standard ways to mash the numbers around. Metro came up with using ammo as currency, that’s one idea. Here’s another one: the in-game currency doubles as experience points. You level up once you accumulate a certain amount, but that process is delayed if you’ve been playing inefficiently and had to buy healing items or ammo. Here’s another, slightly related, wackier idea: your XP percentage bar doubles as your maximum health bar. So you’re always at your most vulnerable right after you’ve leveled up, probably because you went through one of those really traumatic-looking level-up animations with lots of bright lights and shockwave effects. I’m not sure if that would work, it might be annoying, but it’d give you motivation to really get to grips with your new upgrades really fast.

Of course, most of the time, when we exchange one number for another, it’s to the same end: to survive longer. That’s part of what makes me sniffy about regenerating health – it’s a blatant flooding of the in-game economy. The player doesn’t have to make any difficult sacrifices in the name of their survival; they just have to know which end of cover is which for ten seconds. And if that’s all the gameplay you can offer, you might as well just be stirring a cooking pot for eight hours.

But anyway – Health, obviously, dictates how long you survive under fire. Money can be used to buy first aid that restores health. Weapons kill the things that can potentially take your health away, so sooner or later it all comes back to health. The above idea to have survival mechanics in Metro so you’d have to spend bullets on food is just another way of threatening the player’s health if they don’t move some numbers around, and forcing them to split their numbers between defending against starvation on one front and physical damage on the other.

What might be more interesting would be if you had to sacrifice your survival potential for something that benefits the player in some other way. Appearance customization? Backstory documents? How about rocket skates? You don’t strictly need rocket skates to survive, but they may be worth investing in you could use them to speed around the tunnels doing sick ramps off dead mutants.

No, wait a minute, how about this? You make a Metro game that combines the shooting action with life-simulator gameplay. Something from the Harvest Moon – The Sims – Animal Crossing spectrum. So now there are all kinds of things you can spend your bullet-money on. You have to maintain your own little shanty-house and buy increasingly expensive furniture, comforts and conversation pieces. You have to keep your entertainment and social stats up, go out on the town, buy drinks for your mates, woo an attractive member of the opposite sex, save up to trade in your bachelor pad for a family dwelling and ensure that your kids have a comfortable upbringing. But as well as all that, occasionally you have to deal with bandits and monsters trying to invade. What a cross to bear that delightful lava lamp you bought will become when your gun runs dry and wolverines eat your children. And if you did do something like this in Animal Crossing it would certainly make the Tom Nook relationship interesting.