To cut right to the chase: the most tragic aspect of Mighty No. 9 is that there is a good game scratching just below the surface of everything it tries to do. Unfortunately, these efforts rarely manage to breach the countless barriers that come between the game and a good experience, and while it seems like it could result in a good game, it will take work to get there. 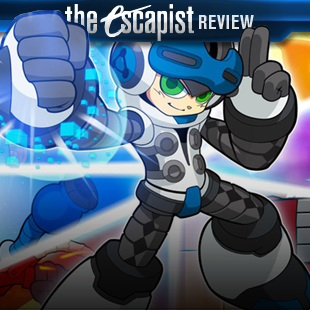 Mighty No. 9 exists in a utopic, post-robotics future in which humans and robots coexist peacefully. The colors are bright, the cities are suitably science-fiction with spires and glass, and everything is happy. Without explanation or warning, all of the robots across the world suddenly rebel. Beck, the titular Mighty Number 9, is apparently one of the only robots who seems unaffected by the sudden surge of robotic insanity, and is tasked by his creator Dr. Will White to go out, find the source of the disturbance, and use his unique Xel assimilation abilities to undo the chaotic damage done to his peers, the Mighty Numbers 1 through 8.

While Beck is out tackling the chaotic battlefields of streets, cities, and creatures, Dr. White and Dr. Sanda, along with the also functional android Call, are digging into the company Cherry Dynamics, leading robot manufacturer, whose CEO is accusing a currently imprisoned Dr. Blackwell who allegedly tried to take over the world in a similar manner once before.

In theory, this narrative should work. White and Sanda are both likeable enough characters, as is Beck, and it all feels like it could have been placed in its entirety in a cartoon show and worked. However, neither Sanda nor White are terribly animated in their movement or emphatic in their voice-work. It feels like a first or second table read, or maybe a first blocking run for a stage show – the inflections come out on the lines where it’s obvious that there should be some emphasis, but for the most part, everything is a little flat while the work finds its legs.

Visually and mentally, the game struggles in similar ways. The art design is solid, the models themselves have no significant flaws or major clipping issues, but it’s not fluid. Everything could use just a few more frames in the animation cycles to feel less uncanny. Likewise, White is stuck in a perpetual open-mouthed exhale, Sanda is a red coat and beard away from being a Santa Claus statue, and Beck’s childlike curiosity and softness gives the impression he’s a stand-in for the kids watching at home. Almost like an episode of Blue’s Clues or Dora the Explorer, where the questions he asks are meant to help a young child piece together what is otherwise obvious based on dialog from the doctors throughout the game.

Mechanically, though, the made-for-children feeling falls apart. Mighty No. 9 echoes back to the post-arcade days of hard stages and limited lives. If a player loses all of their lives, they must restart the level from the beginning. Even mid-level, checkpoints aren’t generous, so players may find themselves playing through parts of stages over and over and over and over and over again until they manage to best the challenge that stumped them, or until their lives run out and they have to repeat the entire process again from square one.

In action, the comparisons to Mega Man are almost unavoidable. The running, jumping, and shooting from the blue bomber character seems preserved almost exactly, with a splash of dashing thrown in that feels highly reminiscent of the Mega Man X series. It feels immediately familiar, which works well given how much the game expects of the player from the start. From the first moments, the game has a curveball or two to queued up, and there’s never a host of moments where the game feels like it’s ready to ease up.

After one or two runs through a stage, the challenges are a lot less challenging.

True to its Mega Man-esque mechanics, Mighty No. 9 is hard. Enemies hit hard, stages don’t skimp on instant-death spikes, endless drops, vertical enemies, and frustrating enemy and trap placements. Beck, without the right DLC weapon, has no real ability to fire up or down. The enemies that appear above or below are very often ideally posed to be difficult to reach without taking a shot or risking spikes. While these are staples of series that may have come before, it never really feels valuable. They feel like cheap shots, granted moments where a player has the opportunity to succeed in grand fashion, but only at the expense of the game’s setup. A game where the ideal outcome is spiteful pride over its unfair constructions isn’t validating so much as vindictive, and that kind of feeling is a hard one to swallow when it isn’t the player being vindicated.

Unlike its spiritual predecessor, the game’s primary method of defeating enemies is to destabilize them with Beck’s blaster, and then dash into the enemies which will absorb the enemy’s energy, Xel. Once unstable, the enemies will bleed Xel into the air until they can either recover, or get absorbed or broken. The captured Xel applies to Beck’s timed power-ups, extending them, or goes into refillable tanks of energy which Beck can use to heal from the pause menu. If the player dashes into any enemy without the enemy being unstable, the player takes damage. While this mechanic works very well when successful, given how much momentum is preserved with a string of destabilizations, dashes, combos, and successes. When the player isn’t nailing combo after combo, the game feels considerably more clunky and awkward; not so much bad as uninspiring.

The game, by design, encourages the player to play fast and loose. Count the exact number of shots it takes to destabilize an enemy, and dash into them immediately. Any less haste, and the Xel recovered bleeds between 10-30% within a second or two. This has a negative impact on the score, keeps Beck in the thick of fights, and means that cautious, patient play will result in getting to the boss fights with 3 lives but no ability to heal. If a player hits an enemy in their stun frames, or just barely misses with a careful string of shots, they’ll dash directly into damage. If hit during the dash animation, players have longer stun and are knocked back further. This means that aerial enemies who fail to destabilize for whatever reason will almost assuredly knock Beck into a trap, spikes, or bottomless pits if the player manages to fumble their shots perfectly. The stages are designed for this, with enemies and hazards placed exactly where one would expect to catch a bad case of death. These will almost assuredly result in at least one death.

After one or two runs through a stage, the challenges are a lot less challenging. The element of surprise is usually the worst part of a stage, and when lost, quickly makes running through the stage a breeze. The problem is the new challenges make the old challenges feel like homework. Fail at the tail end of a stage, and repeat the first part again. Repeat three or four times, in about half the stages, and much of the play time devolves into tedious, valueless repetition.

In the grand scheme of things, Mighty No. 9 has everything it needs to be a good game. The mechanics are sound enough, if pointlessly frustrating. The aesthetic style is well-defined but unpolished. The dashing system is neat but finicky, and the game is designed to make the player pay up if they don’t get it on the first try. The character designs are fun, but lack fluidity. The story is even pretty interesting, once the player gets past the ideas that are poorly delivered. The problem is that the chronically delayed Mighty No. 9 very clearly could have used a bit more time, a bit more playtesting, a bit more patience, and less demand for practice.

Mighty No. 9 does succeed at doing things, but makes them hardly worth doing. Victory is celebrated to spite the frustration, stages are designed to spite the player, and bosses have mechanics that will put themselves at advantages that just feel exhausting. At the end of a long session of play, where it should inspire, Mighty No. 9 just tires. In spite, tragically, of the groundwork for what could be a good game.

Bottom Line: Mighty No. 9 is a trying experience, good when it works but exhausting when it doesn’t.

Recommendation: Enjoying Mighty No. 9 means doing a lot of work the game didn’t, looking past a lot of frustrations, but will give you some good moments if you’re willing to put up with a lot to get them.