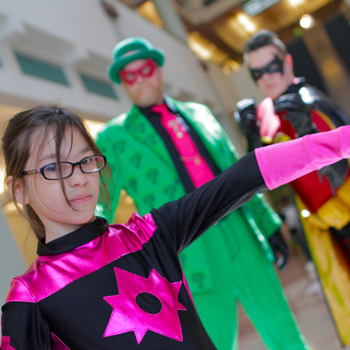 Wizard World Comic Con descended on Minneapolis last weekend, and this year’s collection of cosplayers was filled with brothers, sisters, fathers, and mothers. That’s right; cosplayer families are the new hotness in Minnesota.

Like most nerdy conventions, Wizard World Comic Con is part celebrity meet-and-greet and part flea market. Where else can you purchase a vintage Brent Spiner action figure right after shaking hands with the real Brent Spiner?

But for many people, Wizard World is a chance to dress in spandex and strut their stuff on the show floor. And this year, Minnesota’s costuming community really brought its A-game. The Convention Center was filled with a delicious mix of well-established cosplay favorites like Darth Vader and Batman, and deep cuts like Dr Fate and Kamen Rider.

However, the thing that impressed me the most about this year’s convention was how common cosplayer families are becoming. These days, costuming isn’t something that the nerdy, socially awkward family member does alone. Parents, children, and siblings are coordinating their costume ideas and hitting the show floor as a family.

And I don’t know about you, but I think the world is a much cooler place when parents are cosplaying with their kids.

Just to warn you, though, if you’re perusing this gallery in search of Wizard World’s best video game cosplayers, you’re about to be terribly disappointed. Today’s gallery is dedicated to the convention’s heroes and villains. The pixel-and-polygon-inspired costumes will have to wait until tomorrow. 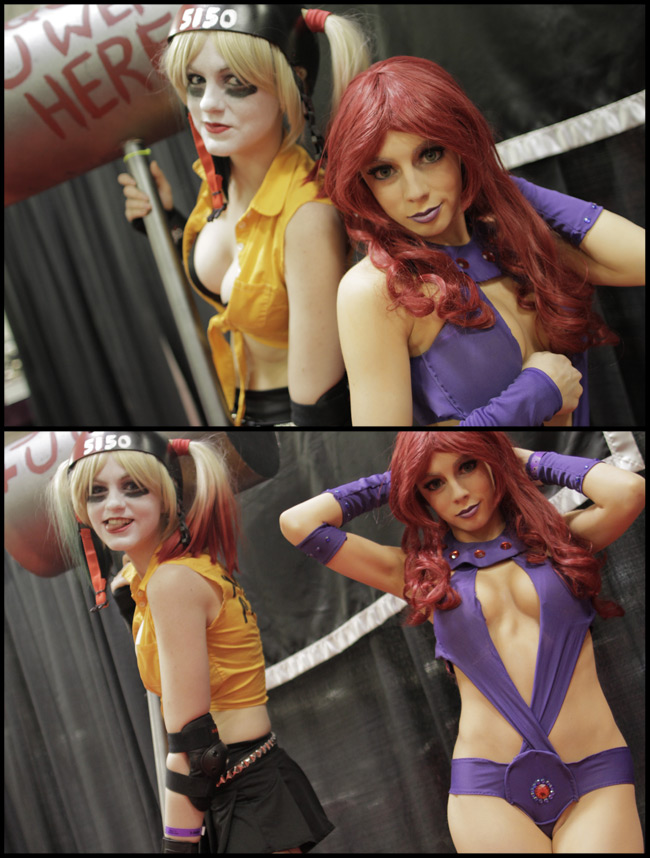 Meet Carley and Carli. These ladies were the very first cosplayers that I ran across after walking into the convention center. Predictably, they were surrounded by a large crowd of onlookers.

On the left, you’re looking at the latest edition of Carley Miller’s ever-evolving Harley Quinn costume. If you’d like to check out more of her costuming, you should probably visit her Facebook and Instagram pages.

On the right, we’ve got Carli Verhaagh’s Starfire getup. Starfire’s dark-but-optimistic backstory resonates with Carli, who describes the character as “the perfect human being.”

Don’t forget to follow Carli on Snapchat (carligirly) and Tumblr. 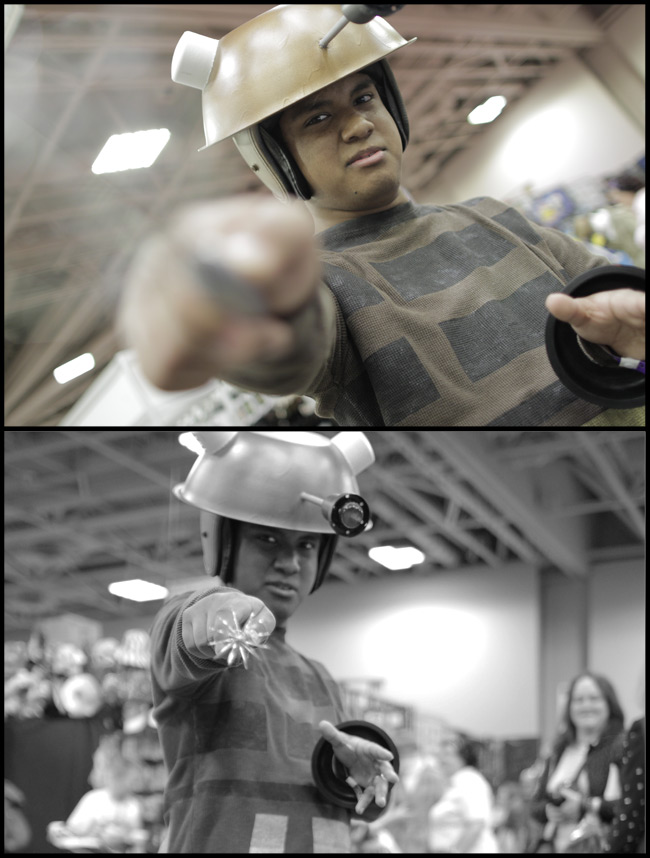 “This version is a lot easier than a full-body can,” he told me. 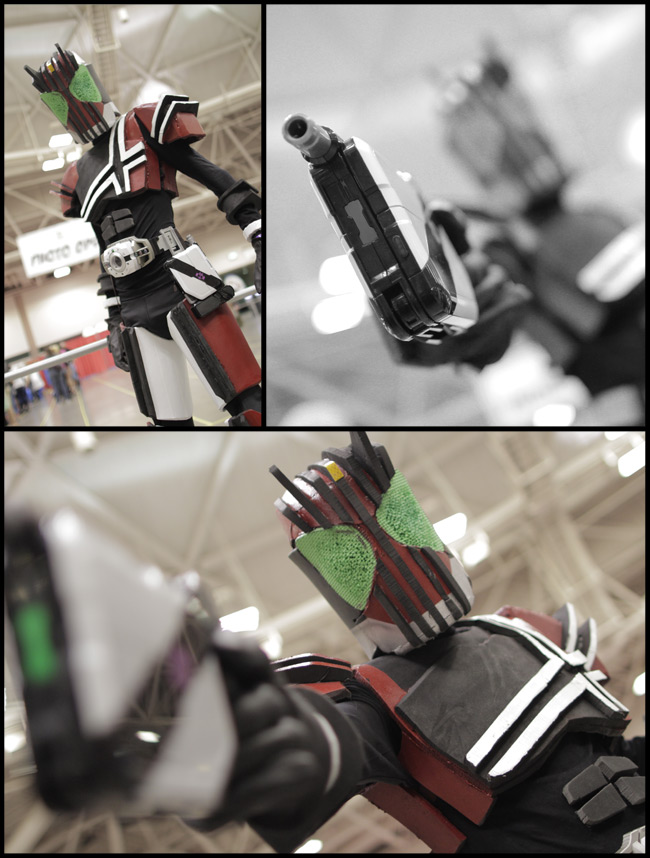 Austin Hokenson is far too young to be this good at costuming. I spent a few minutes chatting with his mom who admitted that this Kamen Rider costume took about two weeks to build. And it often took priority over his school work.

But unless you’re one of his teachers, I think we can all agree that it was worth the effort. 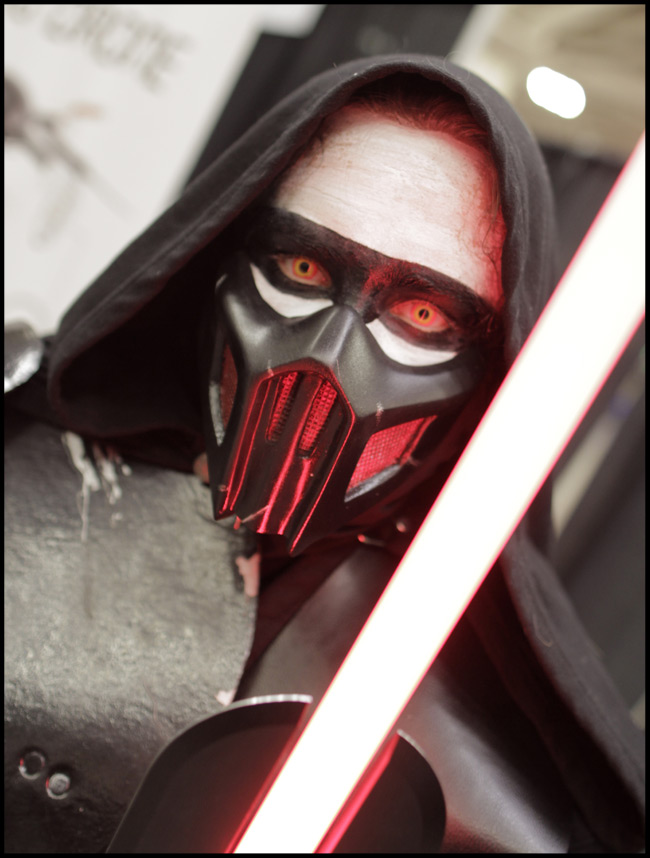 Darth Gheis Dakaal is the brainchild of Terry Birnbaum. And according to the character’s Facebook Profile, Dakaal’s primary mission is to “rebuild the Sith empire.” But Birnbaum admitted that he just likes to show his three-year-old son that bad guys don’t have to be scary.

Though, his son still hasn’t crossed over to the dark side.

According to Michael, their eight-year-old daughter, Amalia, wanted to dress up as Raven during Wizard World, so he and Amanda decided to coordinate their costumes to support her. Michael went with a Nightwing getup, and Amanda rocked a Starfire costume. 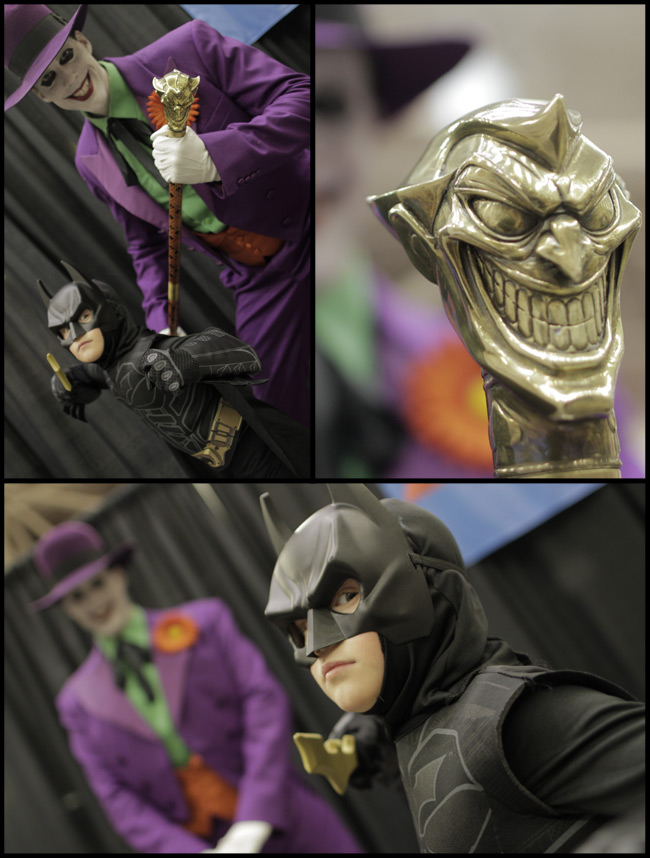 The Joker and Batman

This is David Terres and his six-year-old kiddo, Hayden. David’s been cosplaying for a while now (he actually showed up in this year’s Dragon Con gallery), but Hayden recently started tagging a long.

“I’m a big fan of the bat universe, but I don’t really fit into a Batman costume,” David told me. “Luckily, he does.”

Check out David’s Facebook Profile if you’d like to see more of his costumes (pro tip: his Dirk the Daring costume is my favorite). 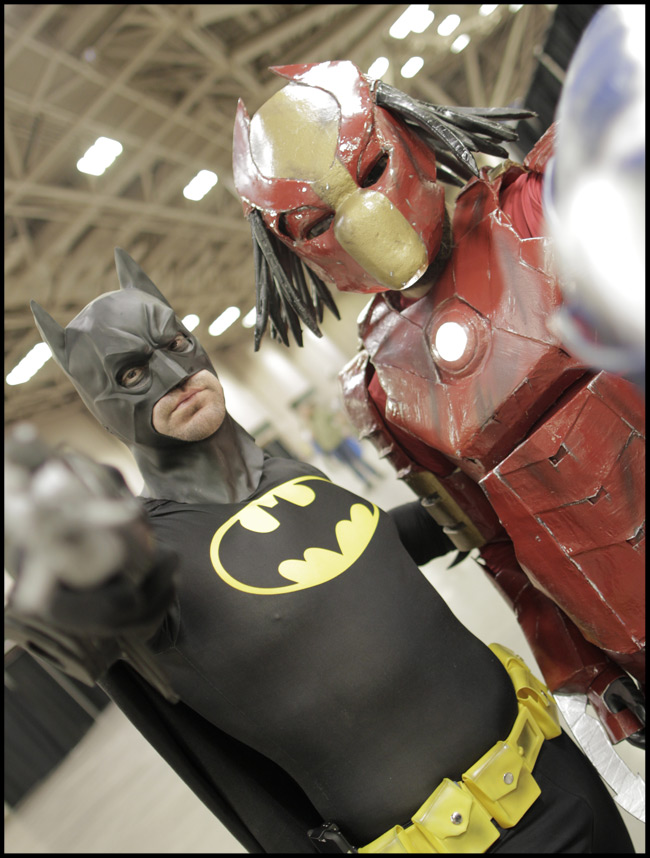 He says that it’ll be ready next year.

If you have time, check out Chris’s Facebook profile. 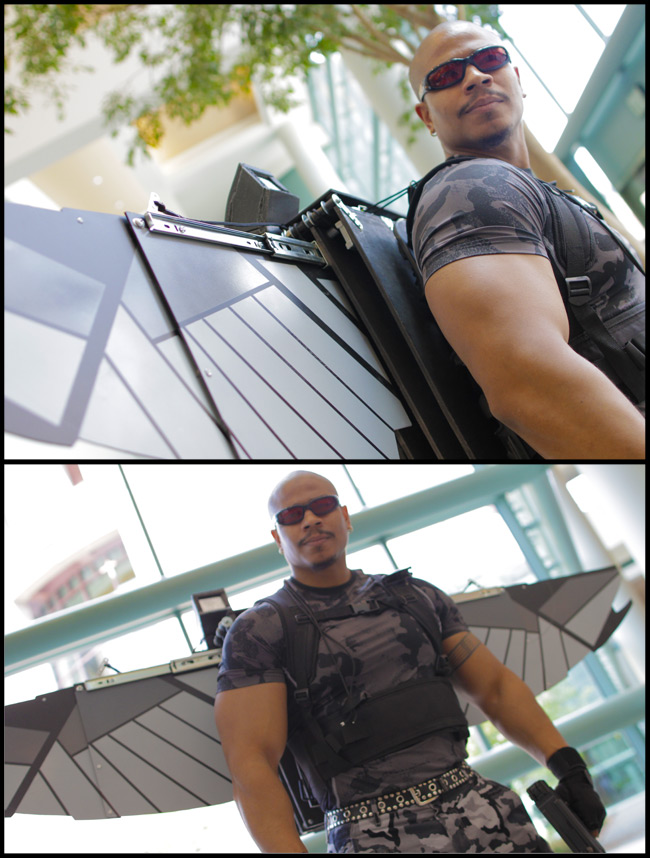 This Falcon costume was one of the most impressive creations on the show floor. Anthony Garnett, told me that he spent about 100 hours on the suit with a friend who’s mechanically inclined. The wings even collapse and expand using a complicated pulley system (check out the awesome gif that I made).

Garnett is part of MN Superheroes United, a group of costumers who appear at charity events and visit hospitalized children.

What are you doing with your life? 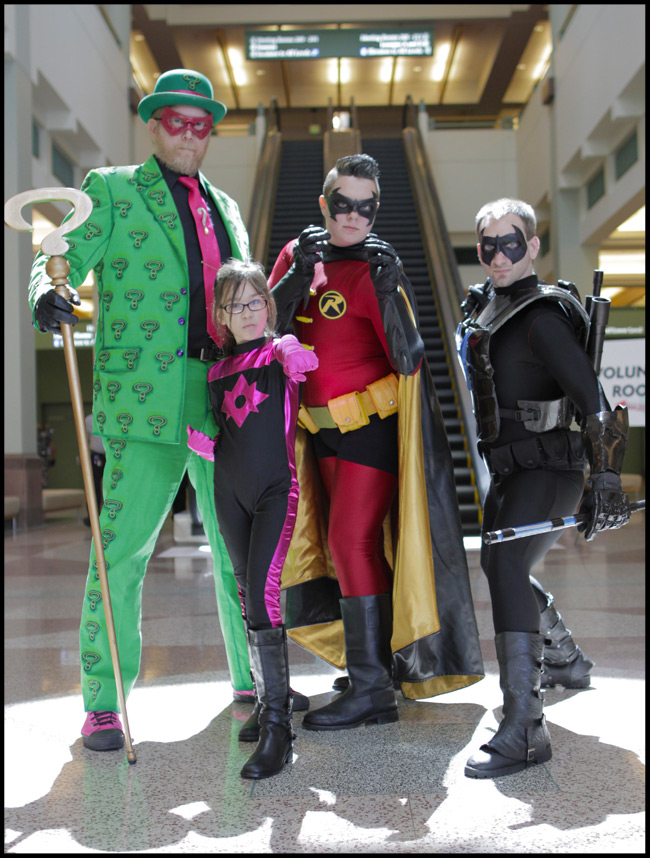 When I asked Bella why she chose Starsaphire, she cut to the core of every cosplayer’s motivations: “I thought it would be cool to be the pink one.”

And it is cool. 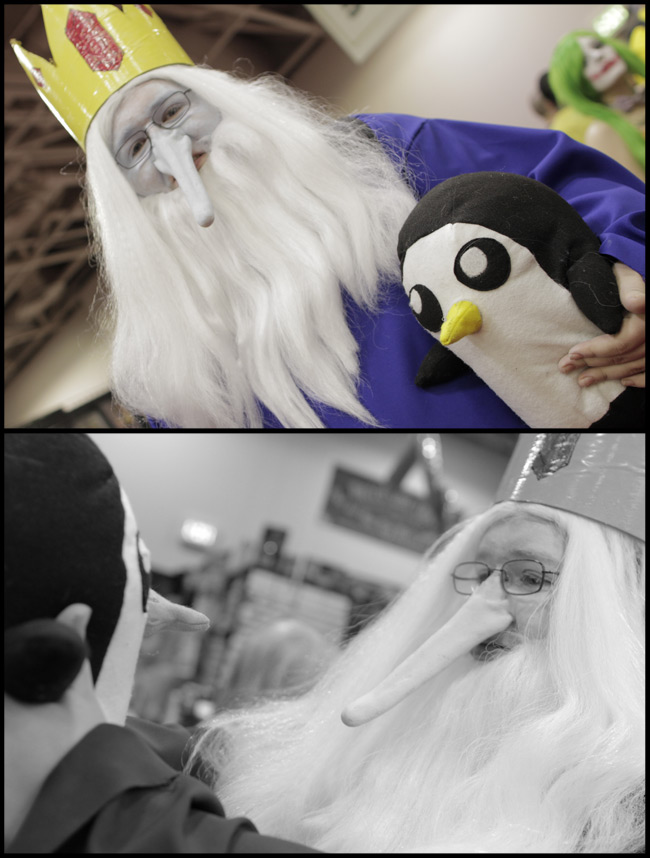 No nerdy convention would be complete without a handful of Adventure Time costumes, and Wizard World Minneapolis was no different. This is John Paananen’s interpretation of the Iceking, and it might be perfect.

The penguin really sells it. Am I right?

If you want to talk about Adventure Time, don’t forget to visit his Facebook Page. 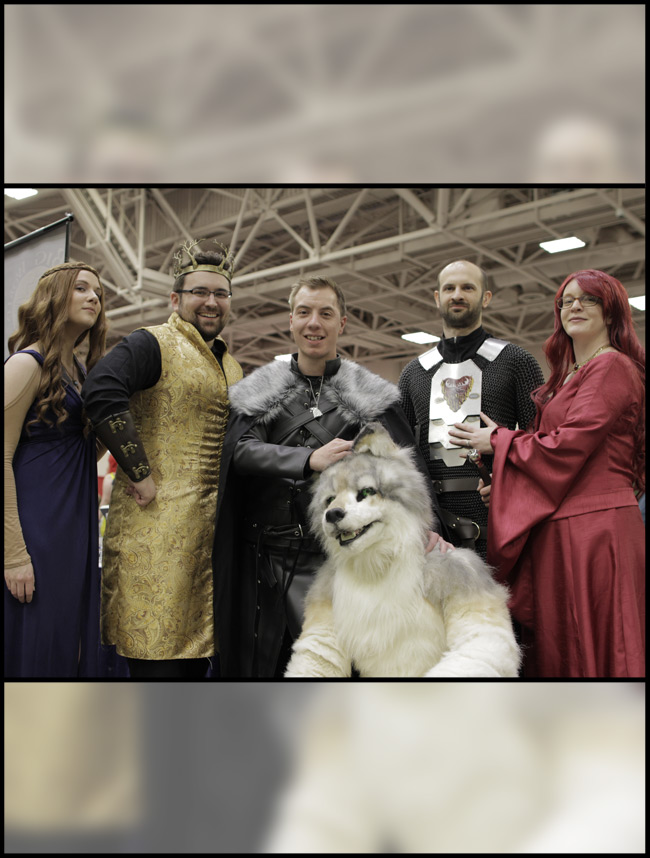 I originally discovered this Game of Thrones crew when I saw Renly Baratheon giving the dire wolf a piggy-back ride. But when I asked for a photo, a never-ending stream of GoT characters started showing up. Eventually we ended up with John Meuwissen (Baratheon), Cody Sakry (John Snow), Megan Hedin (Melisandre), Dan Hedin (Stannis Baratheon), Amanda Meuwissen (Margaery Tyrell), and Mario Hernandez (dire wolf). 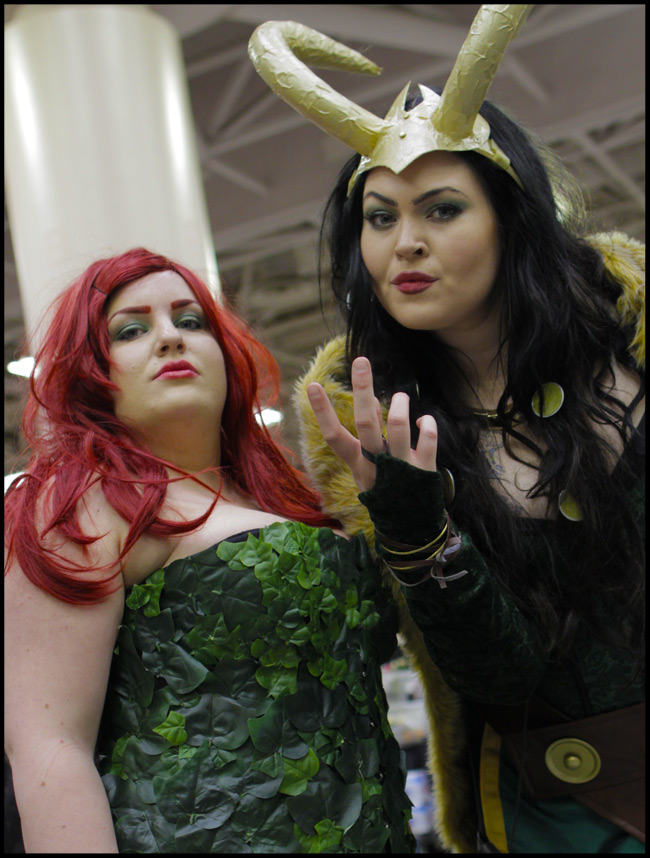 When I ran across Bethany Stauffer (Loki) and Julia Smaby (Poison Ivy), Bethany had just purchased an autographed poster of Tom Hiddleston. It would be a massive understatement to describe her as “excited.” 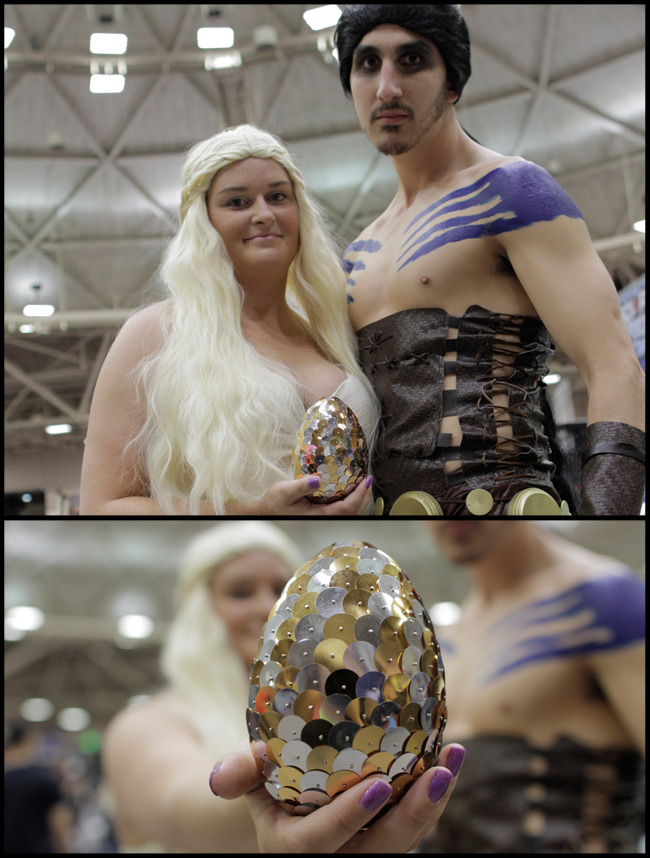 Jake and Toshia Marcus were celebrating their one-year wedding anniversary with a little Game of Thrones cosplay. In fact, this year’s convention marked their seven-year dating anniversary, but this was their first time as a cosplay couple. 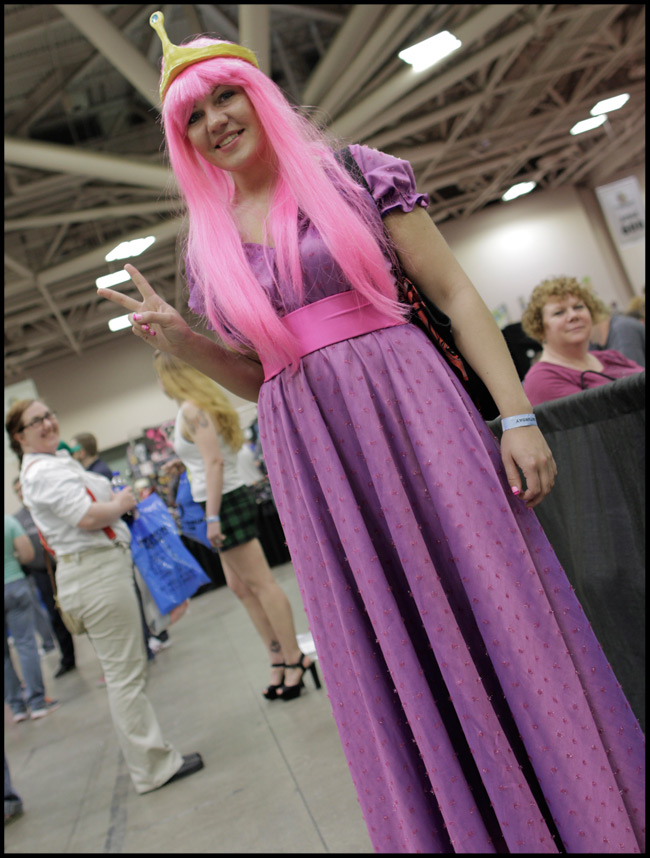 Linda Olson’s Princess Bubblegum costume was picture perfect, but that’s probably because she’s been cosplaying for a while. And judging by her Facebook Profile, the Bubblegum getup isn’t even the most impressive outfit. 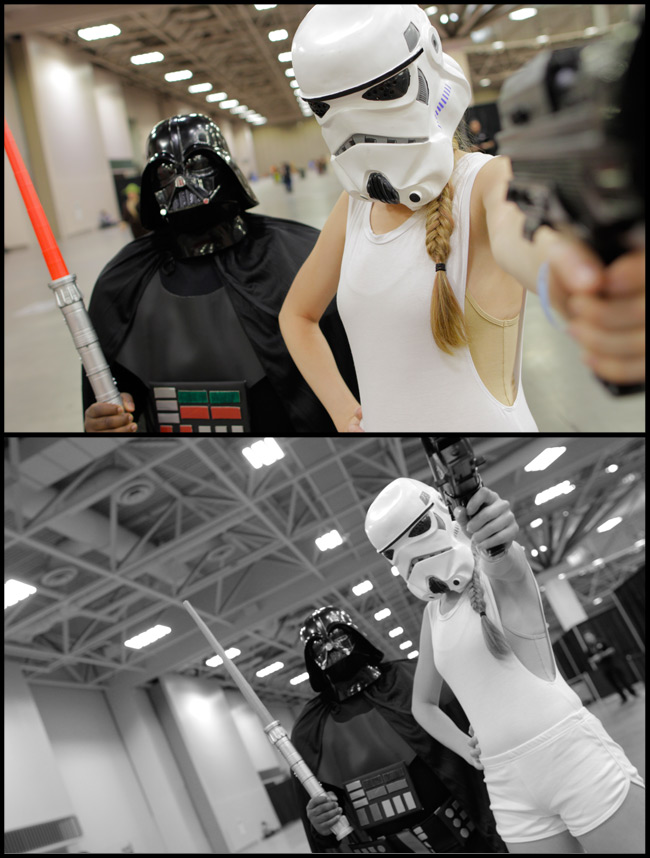 When I asked Christine Mork (Stormtrooper) and Sankaley Nelson (Vader) why they selected these particular characters, Christine admitted that they didn’t have many options. Sankaley’s snoring made the choice for them.

“When he sleeps, he sounds like Darth Vader,” she said. 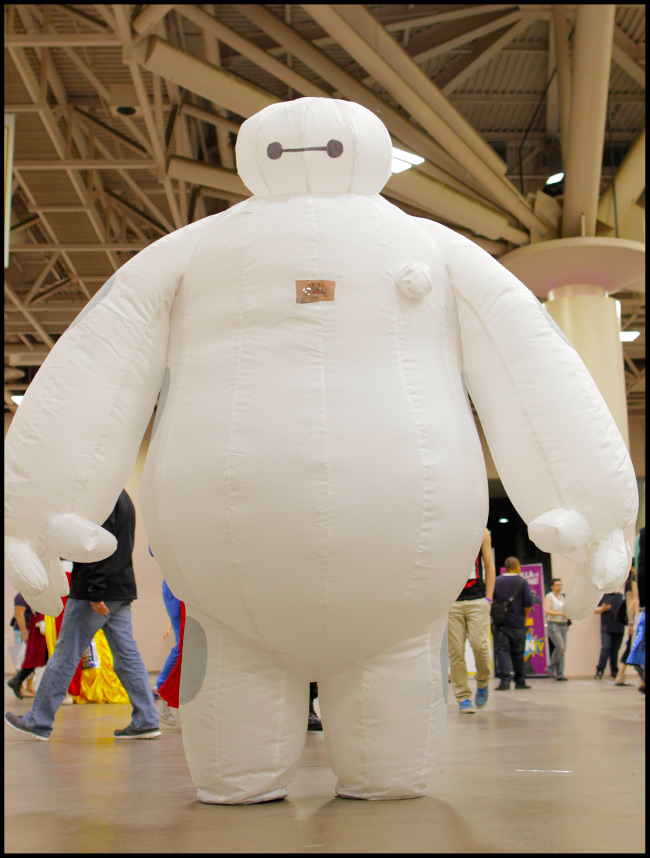 Big Hero 6 was one of last year’s most successful films, so it’s not surprising that the characters are making their way into the cosplay community. But the sheer size of Kyle Bongard’s Baymax getup is ridiculous. I didn’t have a tape measure on me, but it was probably about seven-and-a-half feet tall. Plus, it had an exhaust system that kept the costume inflated and ventilated. 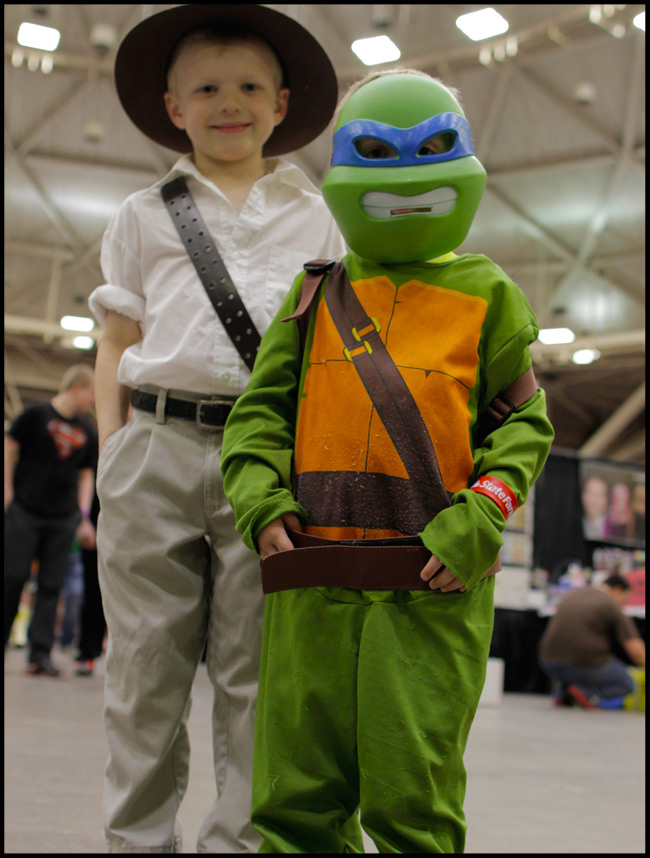 This is Alex (Indiana Jones) and Kyle (Leonardo). According to their father, they love coming to conventions because they get to pick out a new costume. They’ve been rocking Marvel and Star Wars outfits for the last few events but chose a couple of classical characters for Wizard World. 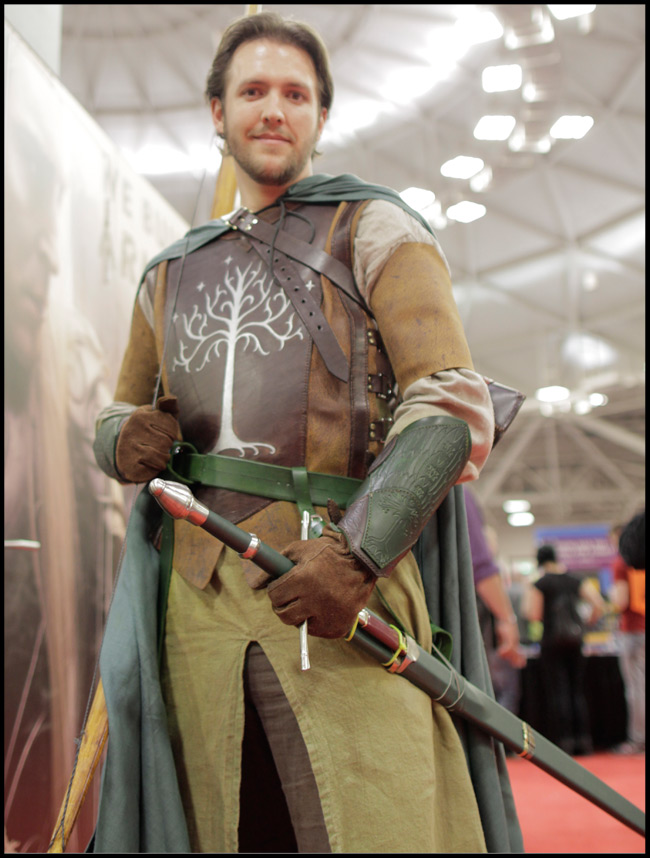 If you look closely in this picture, you’ll notice that Faramir’s sword has been zip-tied into its sheath. That’s because Seth Ramaley doesn’t mess around. That’s a real sword, but the convention center didn’t want to see anyone turned into a kabob. So, the zip ties were a compromise. 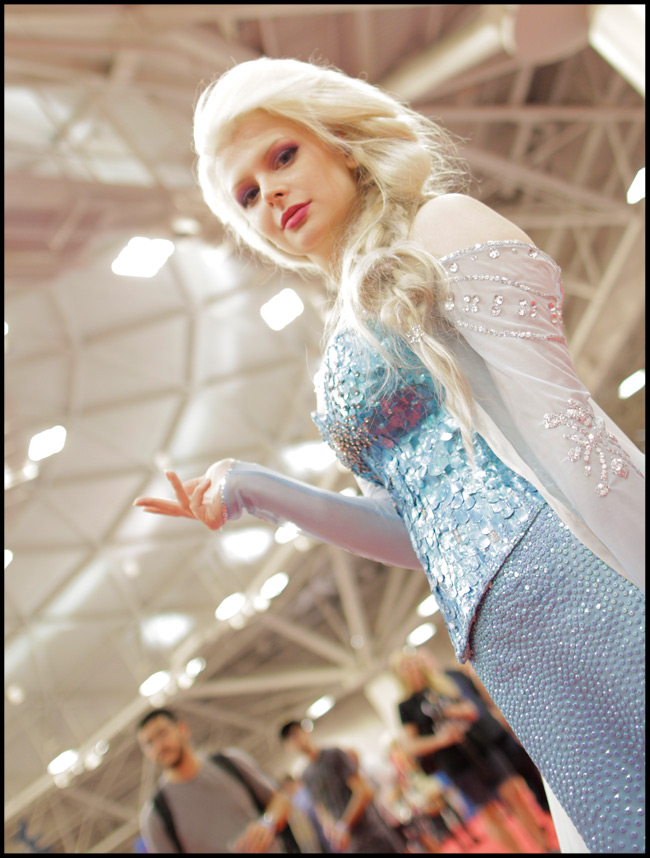 You’re looking at several months’ of work here. Hannah Éva individually attached each sequin, a process that probably made her use Walt Disney’s name as a curse word. 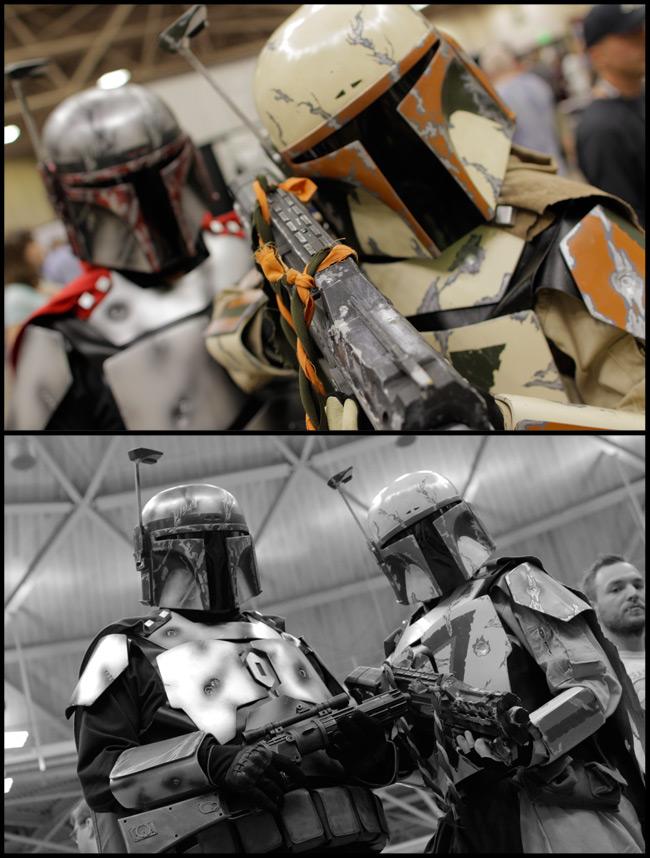 Last year, Paige Lolling asked her father if he’d join her bounty hunting party at Wizard World 2015. And even though he’d never costumed before, he agreed. Over the last 12 months, the duo put the costumes together and customized the color schemes.

Father of the year? 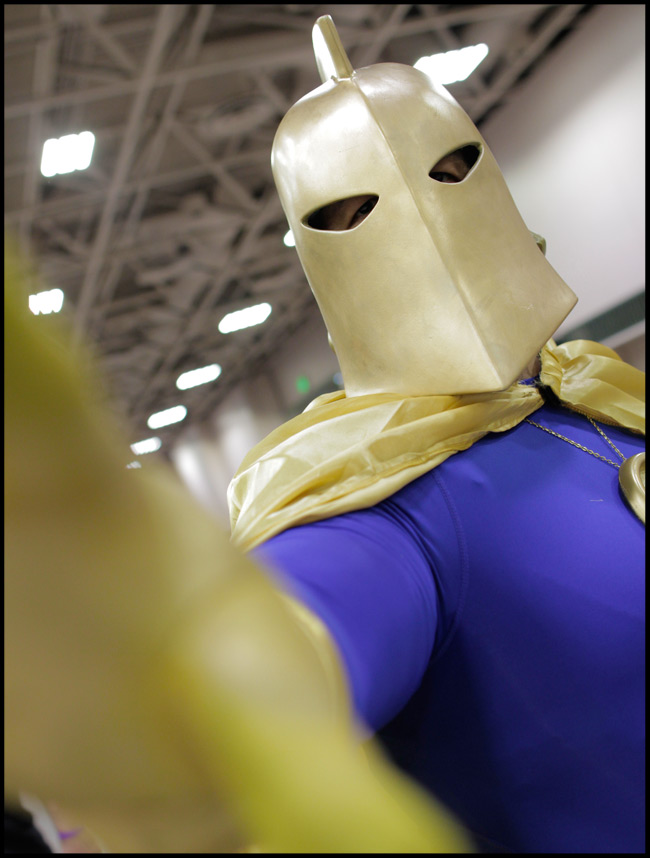 When I was kid, I had a Doctor Fate action figure, but my dad always called him “Lemon Head.” So, when I ran into Jonathan Palmer, I genuinely couldn’t remember the character’s name. The words “Lemon Head, Lemon Head” were on a loop inside my brain.

Luckily, Palmer set me straight and told me that he put the Doctor Fate costume together for a few MN Superheroes United events. 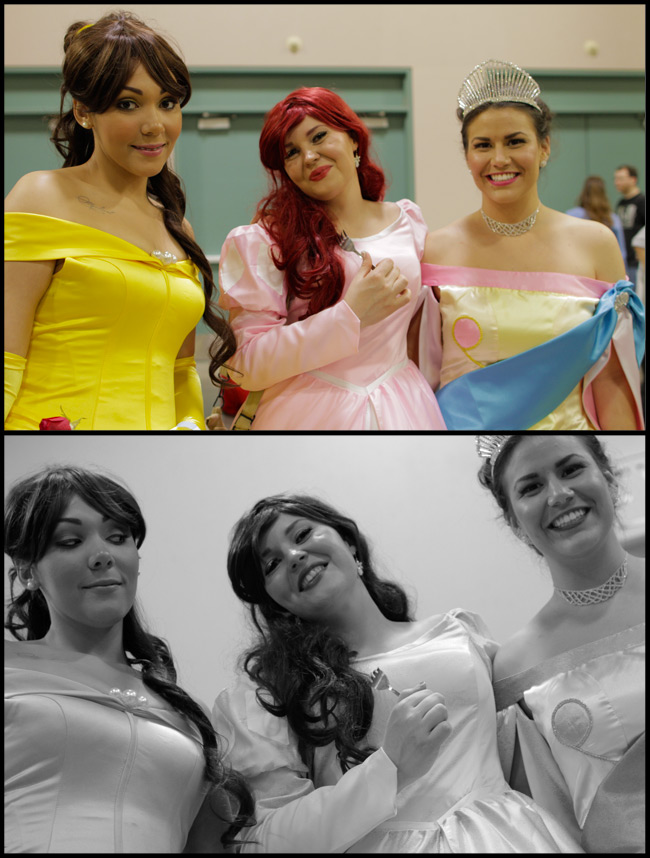 Some of you were probably getting worried that we’d make it to the end of a cosplay gallery without seeing any Disney Princesses. Luckily, Ashley Marlin (Belle), Dakotah Fujan (Ariel), and Anastasia Herrington (Anastasia) are here to save us from a princessesless fate.