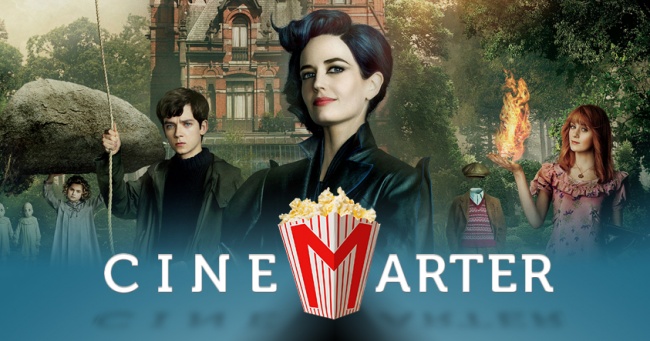 Miss Peregrine’s Home for Peculiar Children marks the third straight movie directed by Tim Burton that doesn’t have Johnny Depp in the cast list, which is the biggest gap of films since Depp was first cast in Edward Scissorhands back in 1990. That’s not really important information, but I found it interesting – certainly more interesting than anything featured in this movie, which is a child superhero movie mixed with a bounty of young adult cliches.

Jake Portman (Asa Butterfield) is an American teenager who just saw his grandfather (Terence Stamp) die. The police believe the cause to be wild dogs, although Jake remains unconvinced. His grandfather’s dying wish was to go to Wales and visit a children’s school he attended in his youth, which would provide Jake with a lot of answers – answers to questions like “what was with all those oddball bedtime stories you told me when I was younger, grandpa?” Jake convinces his father (Chris O’Dowd) to take a trip to Wales to visit the school, only to learn it was bombed out in WW2. 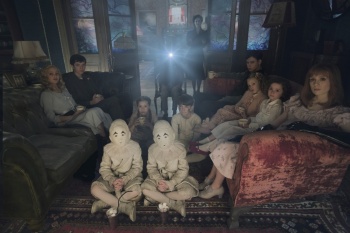 Or, it just looks that way. Jake goes back a second time only to find it looking very much intact. All of its residents are alive, too. He knew all of them from the aforementioned stories. This is a school for “peculiars” – those with unexplainable powers. It’s run by Miss Peregrine (Eva Green) and kept in a time loop, which means that every day the clock resets by 24 hours, keeping the school and its inhabitants ageless.

That’s a complicated enough setup, and it takes the film a long time to fully explain it, too. I’m still not sure it completely did, either. But the main points get through. There’s also a villain (Samuel L. Jackson) who has tentacle-monster bodyguards who need to eat the eyes of the children to look like humans again. After all of the necessary exposition, we get an abbreviated “run and then fight” sequence followed by the credits. Miss Peregrine’s Home for Peculiar Children takes so long to get to the point that the story it wants to tell feels more like a hurried footnote than anything else.

Miss Peregrine’s Home for Peculiar Children is another largely uninteresting young adult movie about “the special” being the only one to save his group of friends.

Not that it’s a plot that’s interesting or deep enough to warrant a significant amount of time. There’s “the special” protagonist, a love interest (Ella Purnell), a hammy villain, and one big fight scene. There’s very little to any of it. And, let’s just say that the romance contains some elements of the Bella/Edward Twilight relationship. Not the stalker part, but the huge age difference. If it’s wrong there, it’s wrong here. Be fair, people. And at least Twilight addresses it, even off-hand. She was with your grandfather, Jake! Think about this!

Anyway, Tim Burton directed Miss Peregrine’s Home for Peculiar Children and it looks like a Tim Burton movie. He was more restrained in his last film, Big Eyes, but he’s back with visual delights and slightly odd comedy here. Does it really help? Well, no, not really, especially since Burton’s not the greatest storyteller. At least, though, we’ve got pretty visuals to look at. It’s not blandly shot or crafted; it’s detailed to the point of excess. It’s all in service of something that you won’t give two licks about, but at least there’s some element that works.

The acting is all over the place. Asa Butterfield is boring in the lead role, although his character is written that way and I have few inklings that the blame lies with him. Most of the kids are fine but not particularly memorable, even when they’re lighting things on fire with a simple touch or floating away if not tethered to the ground with lead boots. And then we have Eva Green and Samuel L. Jackson, who ham it up to the tenth degree because, well, that’s fun, I guess. Neither one is in the picture enough to make much of a difference, but when they’re here, they make it watchable. But it’s a young adult story – adapted from Ransom Riggs‘ novel – so you know where the focus is going to lie.

Miss Peregrine’s Home for Peculiar Children is another largely uninteresting young adult movie about “the special” being the only one to save his group of friends. This time, there are superpowers – but that isn’t enough to engage the audience. The hammy adult characters and director Tim Burton’s signature visual style can’t hold our interest, either. It takes too long to explain itself, leading to an abbreviated plot and bland characters. Miss Peregrine’s Home for Peculiar Children doesn’t end on a cliffhanger – a saving grace, as it probably shouldn’t deserve a sequel.

Bottom Line: It’s not a disaster, but there’s little to care about in Miss Peregrine’s Home for Peculiar Children.

Recommendation: Burton fans may be happy with it, but if you’re looking for anything beyond the visuals, Miss Peregrine’s Home for Peculiar Children will disappoint.