What I find very confusing, my lovelies, is that the first F.E.A.R game was developed by Monolith, the same guys who developed Condemned. The same people who, on the one hand, made something genuinely disturbing and perhaps the last truly frightening horror game to come out of current-generation, mainstream gaming, Condemned 2 notwithstanding, and on the other hand made an infuriatingly longer-running horror series that doesn’t seem to get horror at all. A franchise based upon perfectly generic shooting occasionally interrupted so the game can shake a big metal tray at you and go WOOOOOOO for a few minutes.

The very instant I saw the F.3.A.R trailer (So what does it stand for now, guys, First Threncounter Assault Recon?) any interest I might have had in playing another bloody F.E.A.R game (an amount of interest that had to be measured on the atomic scale) immediately disappeared from the universe when I saw that it was going to have a co-op focus. A horror game which, for all its faults, at least understood principle one on page one of the horror textbook: A sense of being totally alone against some hostile force that you don’t fully understand, was now going to mandate having a friendly hand to hold. Awesome. Why don’t you just add a mariachi band soundtrack and give all the characters sombreros?

F.3.A.R comes across as schizophrenic, because it’s trying to have a significant story focus – a direct sequel tying together all the other games, remember – but also has a co-op focus. So F.3.A.R is assuming that not only both Player 1 and Player 2 have a working familiarity with the increasingly ridiculous not-as-bad-as-Resident-Evil-but-definitely-up-there overarching storyline of F.E.A.R, but also that both players also have an equal interest in seeing the story come to a close. What’s more, the game’s ending actually depends on which player character had the strongest performance. So now we’re also assuming that the same two players will be seeing through the entire game and that both will be playing the same character, not getting bored halfway through and wanting to see what the other play style is like. This is an awful lot of assumptions you’re making here, F.3.A.R (damn is it getting obnoxious to type periods between all the letters). An awful lot of severely optimistic ones, too.

Just to reiterate a point from the video, as is my trademark way on these columns, I don’t think a story focus works in a multiplayer setting. Dialogue and setting and context are all very welcome, a la Team Fortress 2, but a linear plot? Surely that’s something one indulges in privately. I suppose it might not bother you if you were playing online with some uncommunicative, ultra-efficient Japanese accountant with a high tolerance for your sluggish Western ways, but I make it a policy not to play with anyone I can’t comfortably admonish. To that end, I was playing the co-op in the same living room as my colleague, and during all the cutscenes and atmosphere building moments we were chatting about the new Harley Quinn redesign and making fun of the enemy soldiers’ poor decision-making skills. You see, a game story operates on one level of reality, and two human players operate on another. Two mates could conceivably share a What The Butler Saw machine by taking one eyehole each, but they’d probably rather go play on the Dodgems. 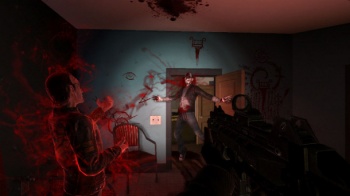 Actually, I’m going to go further on this one and get something off my chest. Things don’t usually stay on my chest for very long but this one’s been digging its claws in like an over-affectionate koala. I really wish console games would stop trying to mix single and multiplayer.

I’m not saying you can’t have games that have a single player mode and a multiplayer mode, that model’s worked pretty well so far and gives a little something for everyone from the cultured pastimers to the keg party guffaw brigade. I’m fed up to the back teeth with games that try to pile the single and the multiplayer eggs in one basket, so playing multiplayer just gets in the way of the story and playing single player just makes you feel like you’re missing out on something. Such is the case with games like F.3.A.R, Mindjack and Lost Planet 2, and I just started playing that new Call of Juarez thing which pulls out a similar set of bollocks.

I’ve often mentioned my distaste for multiplayer but I concede that it’s not inherently bad; it’s just not for me. I’m fine with it existing for the benefit of people of strange and deviant mindsets, as long as it does so on the other side of a big wall where it can’t touch the things I like. But in cases like these games, that wall does not exist, and all the multiplayer components are coming over to me and getting their head lice all over my immersion.

Co-op seems to be a rather lingering trend at present, especially in shooters. I’m guessing this is fueled on the one hand by examples like Left 4 Dead and on the other by increasingly manageable online technology, so we’re no doubt stuck with it until the excitement dies down and some other concept gets big enough that everyone goes to yip around its heels for a while instead. I want this trend to go away so I can enjoy my story in peace. A story that doesn’t get shackled by being unable to have any development that might separate the main characters, and whose atmosphere isn’t ruined by some other chucklefuck swanning about teabagging the set dressing, or by being graded with scores at the end of every chapter.

I object to the fact that single player storytelling is considered with such disrespect in today’s console game market that they force it to share a bunk with the mandatory multiplayer. Gaming could be one of the most exciting new forms of storytelling in all media but you’re all cancelling Pride & Prejudice to show the Friday night football. It’s like being stuck at some excruciating wedding reception with a lot of extremely drunk and raucous relatives who are trying to get you to join in the conga. I do not have the same concepts of fun as you. I would not have a good time if I just let my hair down. Having to share physical space with squawking maiden aunts who still forward lolcats to each other makes me want to spit up my kidneys. Now bugger off and leave me to my cake.