I was a big fan of the original Modern Masters as a draft format. With such a big selection of card, spanning a huge range of sets, Modern Masters draft felt more like an underpowered cube than a normal draft set. It made for a fun and interesting set to draft, and let’s face it; it didn’t hurt to have a chance at opening a pack like this – 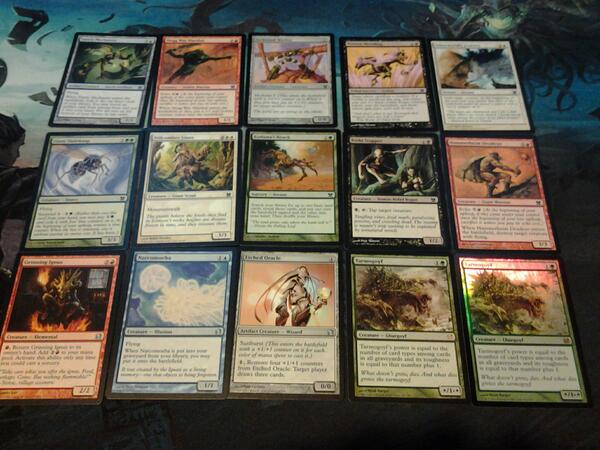 However, there were two issues with Modern Masters. One downside was that it was a little too archetype dependent, once you’d drafted all the different decks is was more question of how powerful a version you had of Giants, Affinity, etc. So for better or worse, the other problem was there simply wasn’t a lot of it to go around, after the initial release weekend and GP Vegas it quickly dried up. Given WotC’s history with the reserve list it’s not terribly surprising that they’d be a little gun shy about print runs.

It’s been two years since the first Modern Master, WotC used last year’s late spring/early summer to print Conspiracy, but today we have the full spoiler for Modern Master’s follow-up, Modern Masters 2015. I wanted to take some time to point out a few interesting things about the set.

As I mentioned, the original Modern Masters was heavily weighted towards certain archetypes with a number of them being tribal, like Rebels, Faeries, or Goblins. This time around tribal seems to be de-emphasized in favor of mechanics, keywords, or other synergies, though there are some Spirits and Elemental tribal in the set. A lot of the mechanics also work with each other, which will hopefully make for a more wide open format. Here are the keywords and mechanics to keep your eye on in each color.

Soulshift is a tribal mechanic that returns Spirit cards from your graveyard, and it’s typically always one CMC less than the cards casting cost. Note that the various Changeling cards in the set are still Spirits in other zones as well. In addition to Soulshift there are a few other Spirits matters cards in White, and if you’re looking to find more Spirits your next best color is Black.

Soulshift #(When this creature dies, you may return target Spirit card with converted mana cost # or less from your graveyard to your hand.)

White’s other primary theme appears to be equipment. A number of the creature get bonuses for being equipped or are naturally good at carrying equipment. A few of the cards are Metalcraft and give a specific better effect when you control more than three artifacts.

While it’s not specifically a theme, Blue does contain a couple Evoke creatures. A creature with Evoke will have some enter the battlefield ability printed on it, and you can either pay its more expensive casting cost to get both the ETB and the body or you can play the Evoke cost to effectively just get the ETB.

Evoke (You may cast this spell for its evoke cost. If you do, it’s sacrificed when it enters the battlefield

Blues also has a number of mechanics related to counters with Graft and Proliferate. Graft allows you to move counters from one creature to another when something enters the battlefield after the Graft creature, and Proliferate gives everything an additional counter. Note that this is any type of counter, not just +1/+1. There are a number of cards with charge counters and -1/-1 counters in the set.

In addition, Blue also has an artifacts subtheme, including the return of Affinity for Artifacts. This would be a nice pairing with the White cards that also want Artifacts around.

Affinity for Artifacts (The spell costs 1 less to cast for each artifact you control.)

First seen in the Lorwyn-Shadowmoor block, Wither changes the way that creatures deal damage. Instead of outright damaging other creatures, they wear them down with -1/-1 counters. Like Blue, Black also gets proliferate and certainly would make a good color pairing between the two.

Wither (This deals damage to creatures in the forms of -1/-1 counters.)

While there is more of it in Red, Black also gets a few creatures with Bloodthrist, and Bloodthirst looks to be the primary hyper aggressive strategy. It’s lacking one of its previous primary Black enablers from [mtg_card=Tormented Soul], there are still other ways to push damage and you’re rewarded with creatures that are bigger than you’d typically get at that casting cost.

Bloodthirst # (If an opponent was dealt damage this turn, this creature enters the battlefield with # +1/+1 counter(s) on it.)

As I mentioned in White, Black has a few other Spirits lingering around as well. There’s more Soulshift and many cards that reward you for sacrificing your own creatures or simply creatures dying, so it’s not a bad idea to look for cards that spawn tokens.

Like Black, Red is also in the mood to beat down with some Bloodthristy creatures, though cards like [mtg_card=Goblin Fireslinger] ensure that it’s easier to get the train going.

Red Elementals are one of the deeper tribal themes in the set, though there is not a specific mechanic tied to them other than a few of them giving a bonus if you’ve activated their abilities three times in a turn. Note that this only cares about it being the third time, for instance [mtg_card=Soulbright Flamekin] can’t make infinite mana. It’s only on the third activation not every third. There are also Elementals in pretty much every other color.

Red also has a subtheme of lands. Domain rewards you with a greater effect for every basic land type you control and a few cards reference activations of the full WUBRG mana. Luckily Basic Landcycling returns as a way to assist in fishing these all up.

Basic Landcycling cost (cost, Discard this card: Search your library for a basic land card, reveal it, and put it into your hand. Then shuffle your library.)

Well now we’re starting to come full circle. Green features Graft, Domain, and Basic Landcycling, and there are appropriately a bunch of cards that either care about counters, gain counters, or want you to play a bunch of colors.

There’s also a heavy theme of going wide in Green this time around with a number of cards for creating tokens, [mtg_card=Overun]ing a wide board, or in other ways favoring having a bunch of creatures in play. Not that unlike the Thalid archetype from the last Modern Masters. These tokens also play nicely with a bunch of Convoke cards in Green.

Convoke (Your creatures can help cast this spell. Each creature you tap while casting this spell pays for 1 or one mana of that creature’s color.)

Two of the commons also make Eldrazi Spawn. Even if you’re not trying to ramp out Eldrazi, these tokens are more useful than they might initial appear.

Pairing well with the Domain strategies, though it doesn’t specifically stress having basic lands, is Sunburst, which appears on a few of the artifact creatures. These creatures also play nicely with the other counters matter cards like Proliferate.

Sunburst (This enters the battlefield with a +1/+1 counter on it for each color of mana spent to cast it.)

We don’t get its premier example in [mtg_card=Batterskull], but there are a number of other Living Weapon cards in the set. They tend to be a little more costly to equip than you’re normally be happy with, but the Living Weapon trigger gives you a free body to start with. Don’t forget that the Germ token is Black not Colorless, you’d be surprised how often that comes up.

Nothing that interesting here. I think the only thing of note is that the Bounce, Karoo, lands are back. These a great for mana fixing and pseudo-card advantage, but they don’t have the basic lands types and thus won’t help your Domain.