At the risk of Extra Punctuation becoming some kind of regular vehicle for apologetic backtracking to soften the blows of particularly brutal Zero Punctuations, I just want to say that I am fond of Peter Molyneux. I like him for what he represents: a bygone age. And I like him because he has enthusiasm. A slightly weird enthusiasm, perhaps a little misguided and perhaps a little too eager to express itself, but when most of the game developers I know are jaded and uninvested in the increasingly corporate environment in which they are expected to create, an eager auteur with actual creative vision in control of his own IP is a positive presence.

These days, everywhere, I look I find more and more evidence that the breed of games I like most – immersive, artistically-driven triple-A console titles – are dying. Unsustainable. Ruinously expensive to develop and insufficiently purchased by consumers who have gradually been bred to immediately reject anything that doesn’t have the shiniest graphics, the realistic-est physics and the growliest insecure-est white male space marines. The new games I generally take it upon myself to review taper more each day into the same stream of boring, linear, repetitive shooters designed by a committee of unfeeling concrete monoliths on expensive leather chairs to meet the same fucking checklist of features proven to milk the most money from the C2DE Fucktard demographic. All my instincts tell me that this death of innovation is going to cause another crash. The future probably lies in the Steam/handheld/XBLA market, but returning largely to a small-scale market driven by innovation, while appealing in much of its aspect, also depresses me when I think about the realistic, atmospheric experiences I’ve had that the entire history of gaming technology seemed to be leading up to. Shadow Of The Colossus, Arkham Asylum, Just Cause 2, all my favorite titles, born from something that may be lost to us as the industry plunges into bankable mediocrity.

The major warning sign for me that the industry has become increasingly artistically bankrupt is that it no longer produces “names.” The celebrity artists of game design, your Peter Molyneuxs, your Tim Schafers, your Sid Meiers, your John Carmacks, all emerged out of previous eras. But Peter Molyneux’s particular problem is that he’s still stuck in the mindset of his time. He is the undisputed king of It Sounded Good On Paper. Yeah, twenty years ago when the ability to have sex with hookers in Leisure Suit Larry blew my fucking mind, the notion of a game being so deep and expansive that after visiting an inn and flirting with the waitress on your way to slaying the dragon you can come back and buy the inn and marry the waitress, or any building or member of the service industry in the world, would have sounded like some glorious unreachable pipe dream. But now that a game can actually have those elements they’re a lot less appealing than they seemed while we couldn’t have them. Anything looks more appealing when it’s behind the window of a swanky shop, against which we press our noses, spellbound.

Peter is still in the mindset of when games were restricted by technology. When we thought it would be amazing to have a game that could be an action-adventure and a management simulator at the same time. So he’s eager to explore these juvenile notions now that the technology is available, and they fall flat for one very basic and very obvious reason: tone. History has shown time and again that audiences have little interest in a game that tries to finger every moistened pie. Fable 3 with its attempt to hybridize action-adventure and management sim just ends up being too managementy for the action-adventure fans and too actiony for the management crowd. 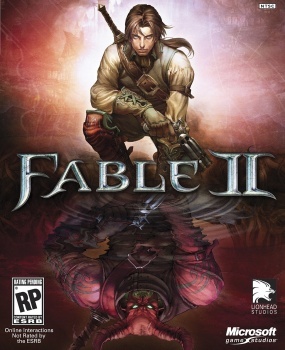 Come to think of it, Fable suffers generally from a lack of consistent tone. Answer me this, fans of Fable: if Peter Molyneux weren’t a “name” but some kind of mailroom clerk in the Omnigaming Corporation, and he suddenly found himself sharing an elevator with the chief creative director who’s been on the lookout for a hot new property, how exactly would he pitch the Fable series in twenty-five words or less? ‘Cos I’m thinking the director will be politely breaking off and repeatedly smacking the “open door” button before Peter can even get to the condom part. Is Fable 3 a comedy, a drama or horror? In three consecutive breaths it’s got naughty insulting gnomes, struggles against murderous despots and people getting mind-raped by Cthulhuoid substances. Who is the game intended for? Men? Women? Adults? Children? If adults, why the cartoony visuals and bad jokes? If children, why all the murder and fucking? Granted when I was a kid that would’ve made my day, but it’s off-message, isn’t it?

Peter likes to innovate. That’s what’s great about him. But he doesn’t innovate for the right reasons. I remember before Fable 2 came out he made a big thing about the fact that it didn’t have an in-game map, relying instead on a glitter trail to show where you’re supposed to be going. The problem is, the reason why maps have become cliché is that they’re useful things to have. You might as well complain that having a mobile phone is cliché, like that’s a reason to not have one. Well, Fable 3 has a map now, but you have to catch a bus to use it.

I’m willing to bet Peter would have talked this up as a selling point, too: instead of an in-game interface or inventory screen, you have to bodily teleport yourself to a little hideout where all your stuff and important information are kept in a succession of rooms, packed away with an assortment of incredibly unintuitive filing systems. What was this for, immersion? Well-designed interfaces have never gotten in the way of immersion. Obviously the ideal interface varies from game to game, but as a general ballpark rule, the least button presses the better. Yes, Microsoft Excel is a bit frumpy but it works, and it works by not making you teleport to Excel Land and walk through three doors just to use the sigma function. And while we’re on the subject, having to hold down the “use” button to confirm that I want to use something really gets on my wick. I’d have thought bounding up to the thing and pressing “use” would be enough confirmation for any man.

But because it tries new things, for better or worse, I’d rather have Fable around for tea than any of the committee design checklist brigade. That’s why I’m concerned by the fact that Fable is the only title of Peter’s that has gone into a second sequel (except Populous, but Populous: The Beginning was more of a reimagining). I’m concerned that Peter is conceding to the same sequel-churning corporate machinery by which he has been thus far largely unaffected. Earlier I said Fable 3 tries to balance action-adventure and management, but it’s worth noting in his earlier career Peter made some very good action adventure games (Syndicate, Magic Carpet) and some very good management sims (Theme Park, Dungeon Keeper), which were good because they weren’t trying to be anything else. I wish he could unlearn the last few years and remember how to keep a narrow focus. If he were making Dungeon Keeper today he’d probably let the player take their individual imps on romantic dinners.