Over the weekend, MomoCon 2015 crash landed in Atlanta, and the cosplayers were out in force. These are the best comic book, film, and television-inspired costumes.

MomoCon has always been a one-stop shop for anime lovers, but this doesn’t mean the convention isn’t chock-full of comic book, film, and TV-inspired cosplay. In fact, it doesn’t really matter what particular breed of nerdiness you subscribe to; this week, you would have felt right at home in the Georgia World Congress Center. To prove it, I’ve put together a collection of the convention’s best heroic and villainous cosplayers.

If you’re looking for anime and video game cosplay, though, your princess is in another castle. I’ll post that castle later this week.

Also, just in case you missed it, I just used “castle” as a metaphor for “cosplay gallery.” Are we all on the same page, now? 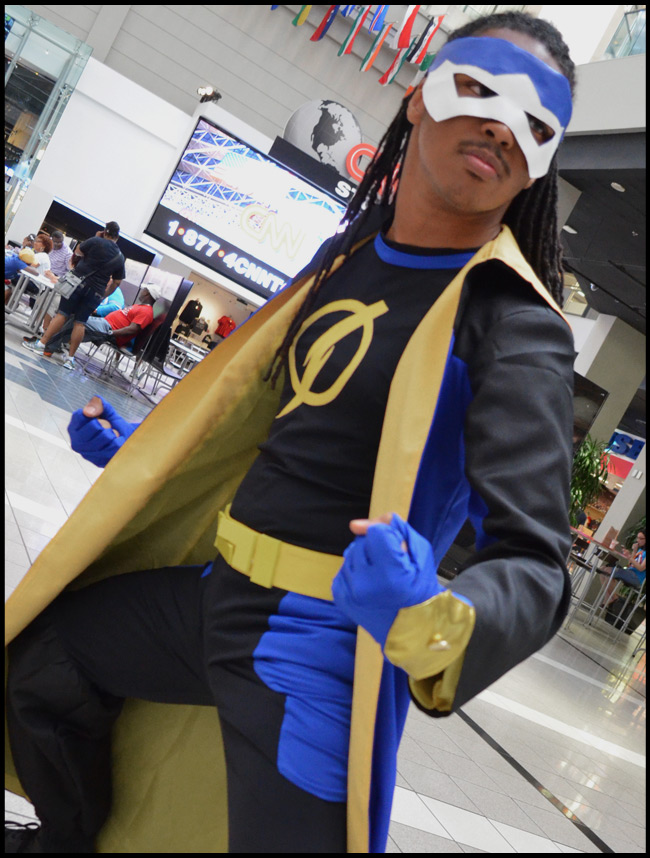 Kameron has been a Static Shock fan since the 1990s, and conventions like MomoCon allow him to crawl inside a nostalgic bubble and get reacquainted with the character.

When I asked him how he felt about the rumor that Jaden Smith would be playing Static in the DC Cinematic Universe, Kyler just shook his head and whispered “After Earth.”

If you like this, you should probably check out the rest of his cosplay collection on Facebook. 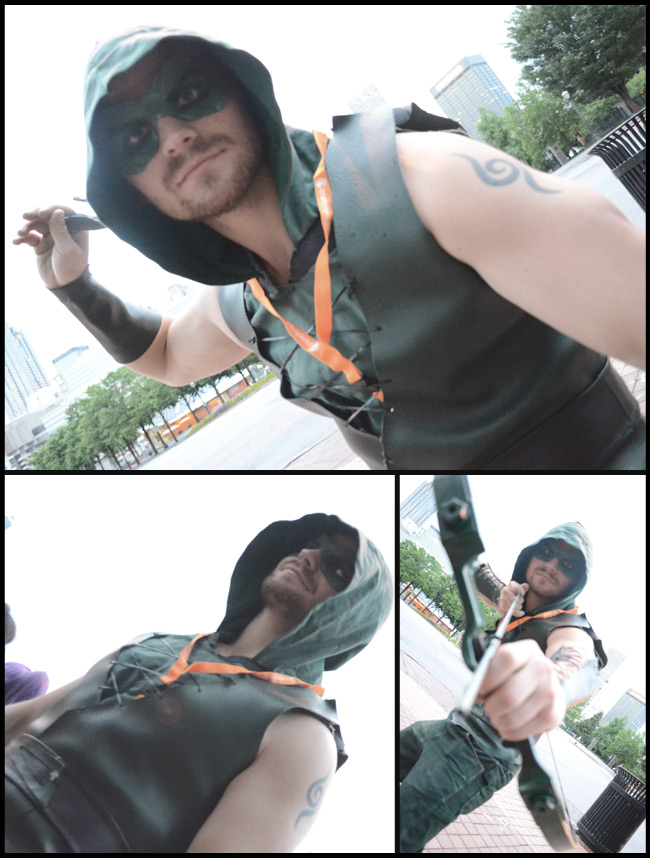 And you should probably wish Casey a happy birthday in the comments, and check him out on Faceboook. 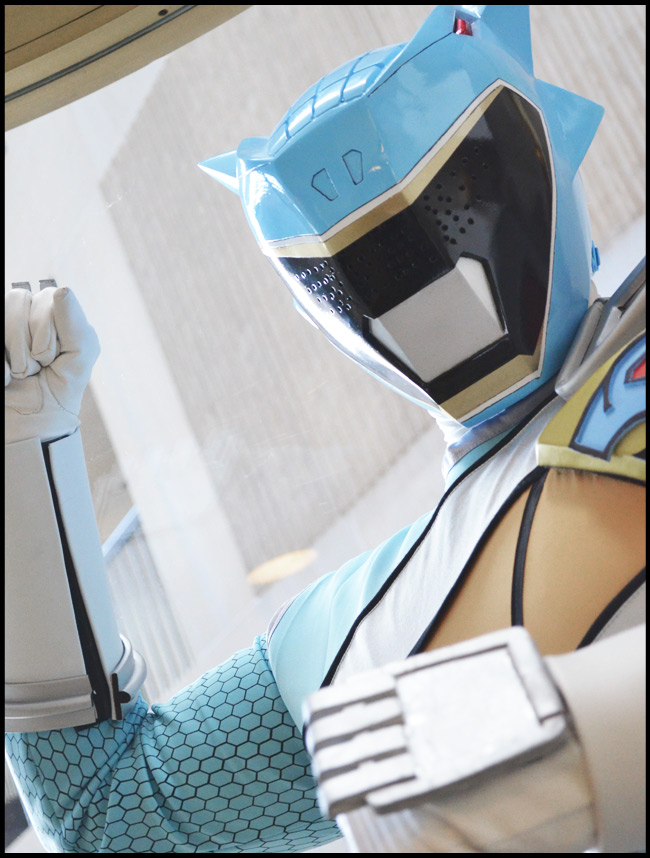 It’s actually rare to see a Dino Charge Ranger wandering around a nerdy convention. First-gen rangers are well represented, but those Dino Rangers are hard to come by. 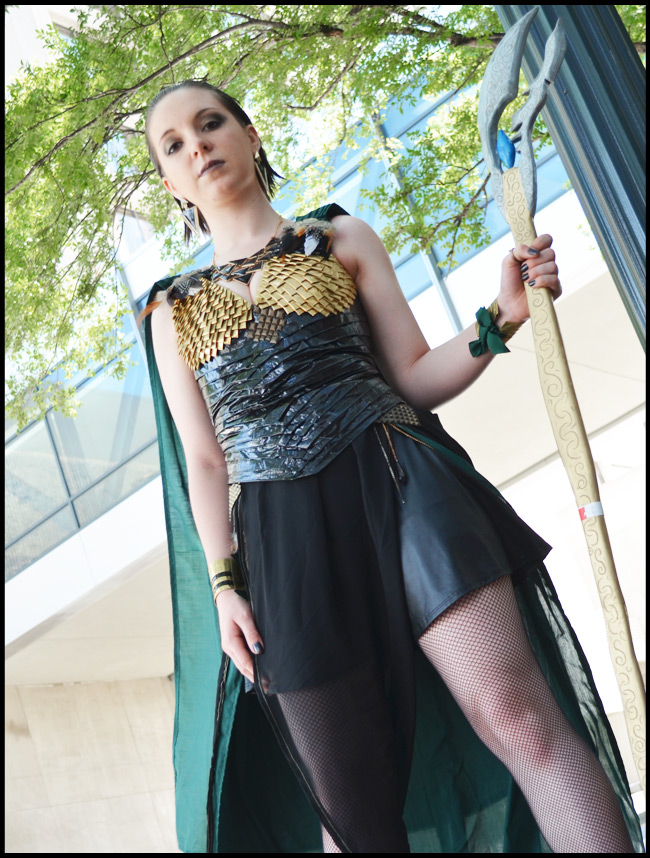 I ran into Loki and her friends (Thor and Ariel) outside the convention center. They were being followed by a creepy, leering man who was dragging a pre-teen child behind him. After I kindly encouraged the man to move along, Kristan told me that this kind of treatment is typical for cosplayers. Apparently, as soon as someone puts on a costume, everyone else forgets how to behave in a civilized society.

So, if you’re reading this and you’re a creepy asshole, knock it off. This is your first and only warning. 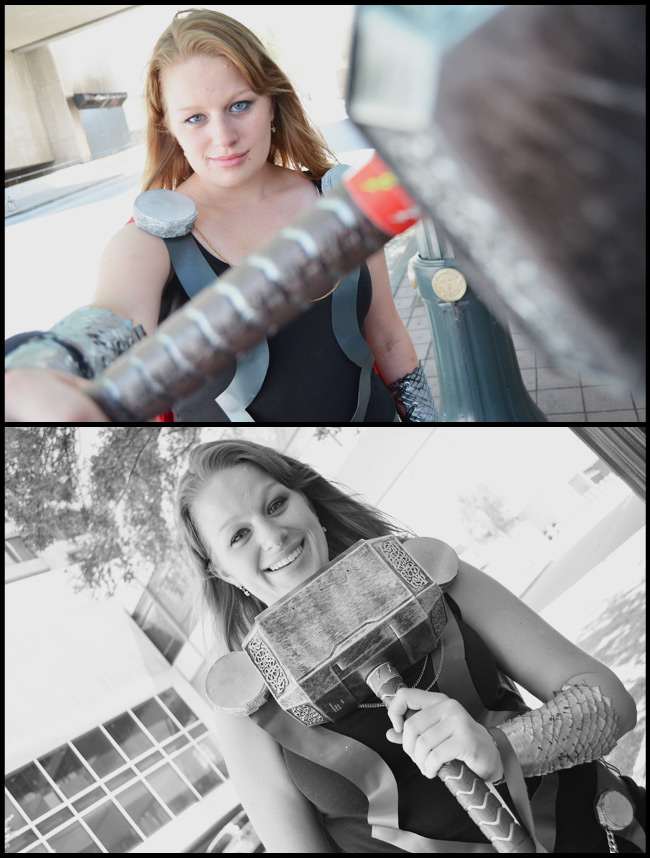 In the Marvel Universe, Thor and Loki are brothers, but Sydney and Kristan don’t care. In fact, they purposefully chose these characters because they wanted to flip the gender.

Plus, Thor has luxurious blonde hair, so Sydney’s choice was easy. 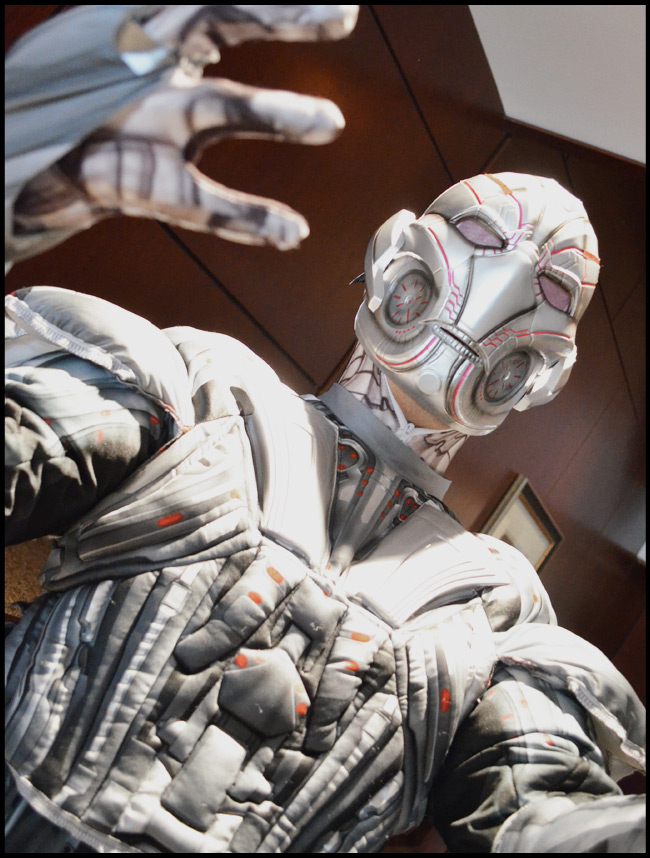 There were surprisingly few Ultrons wandering around MomoCon this year. Luckily, RJ saved us from an Ultronless convention.

I didn’t actually experience it for myself, but RJ’s costume looks far squishier than the real Ultron. But, to be fair, Ultron’s not actually real, so trying to measure his squishiness isn’t easy. 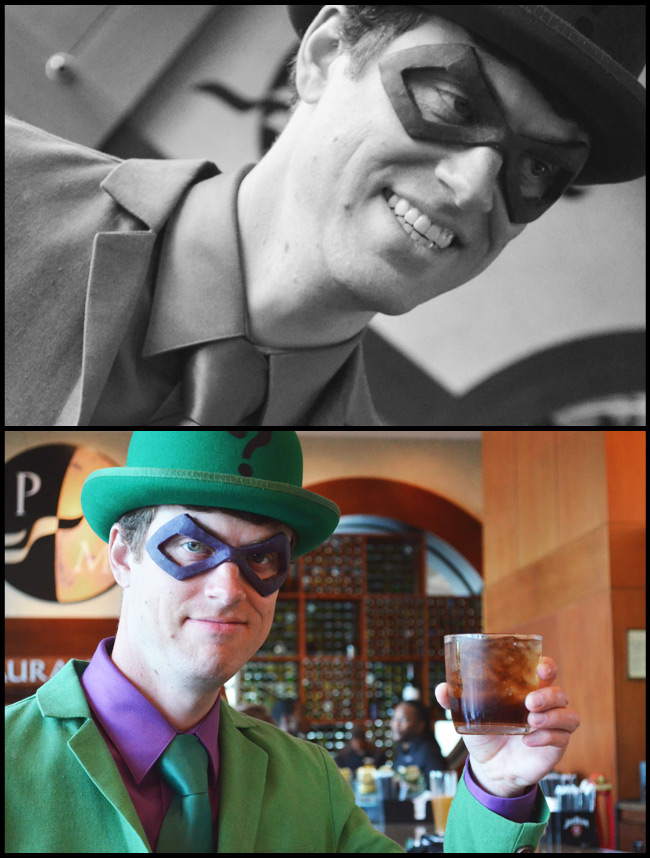 Larry Jenkins as the Riddler

I ran across the Riddler as he sat down to consume an alcoholic beverage. And in true Riddler fashion, he instantly posed this question to the bartender:

Do you know the answer? Post it in the comments (no Google cheating). 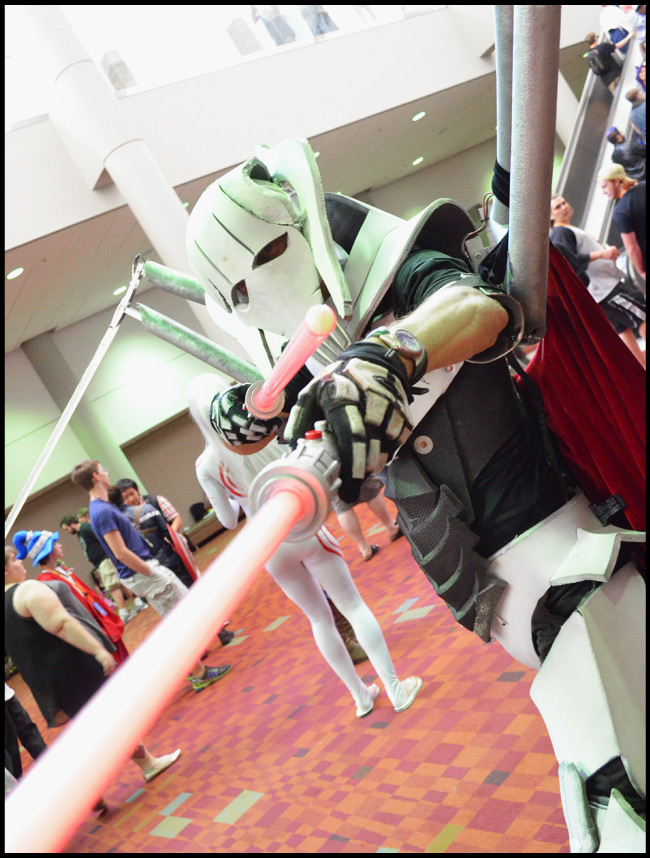 Scott’s costume is an impressive piece of architecture. As he posed, those gangly LED-wings followed suit, striking their own dramatic poses.

“I really like winged costumes,” he told me. “I made a different one last year, and used the same concepts this time around.” 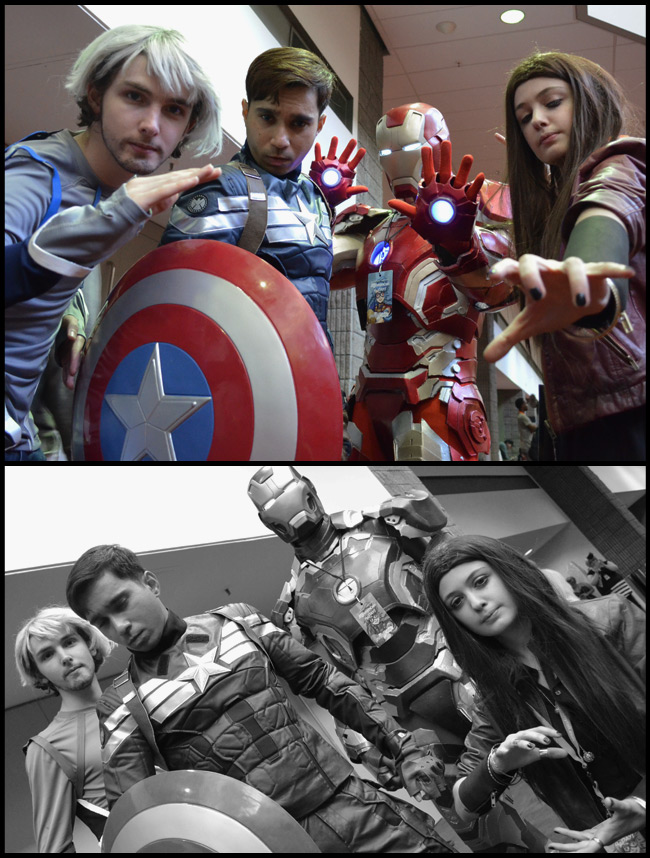 I think we can all agree that no convention would be complete without an appearance from The Avengers.

This crew attracted such a massive crowd that none of them had time to talk to me about their costumes. So, I ended up hanging out with Iron Man’s brother, but he refused to tell me any of Iron Man’s childhood secrets. 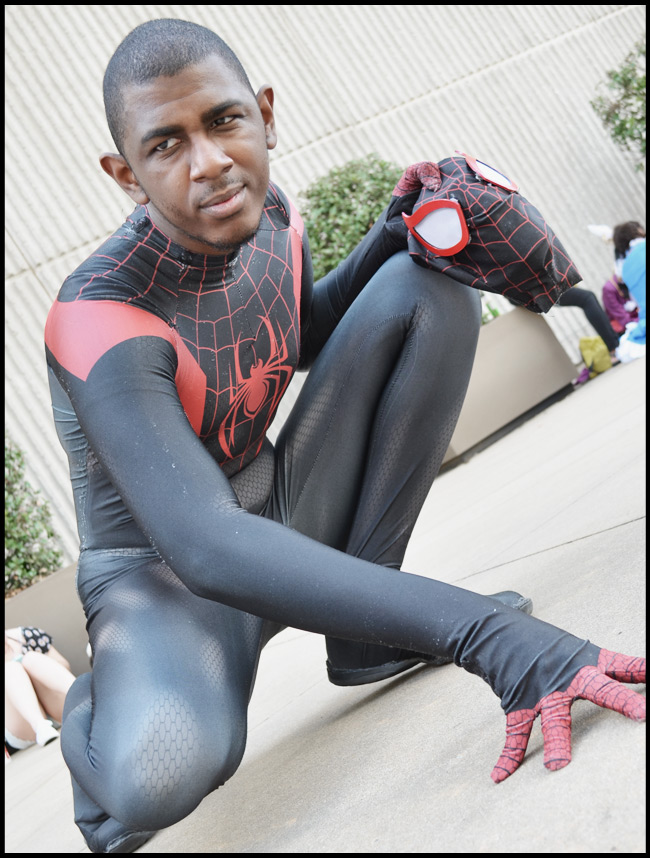 Kyler and I had a long talk about how awesome Miles Morales is. And we both agreed that the world needs more Morales. 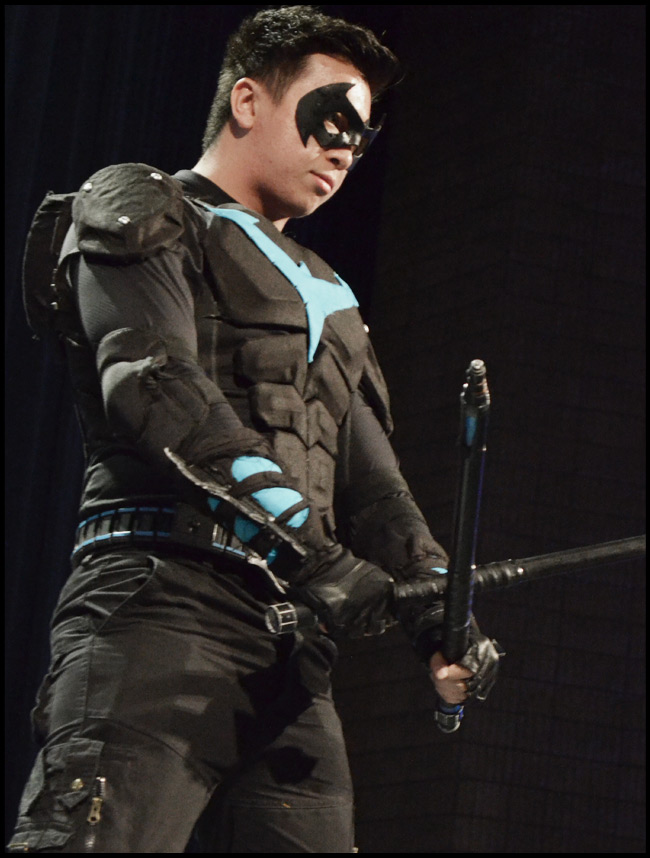 Leo strutted his stuff during the Cosplay show on Saturday night. I didn’t get a chance to chat with him, but I think its safe to assume that his getup is based on the Nightwing webseries. 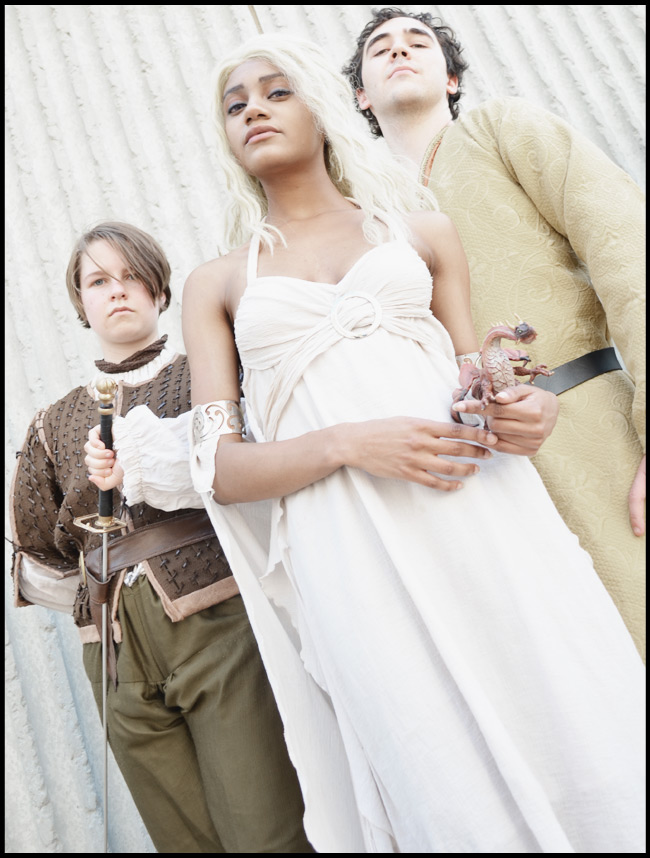 This trio was crowded around a boombox that was blasting the Game of Thrones theme song. They tried to convince me that the the sound system wasn’t theirs, but if I had a theme song, I would carry a boombox too. 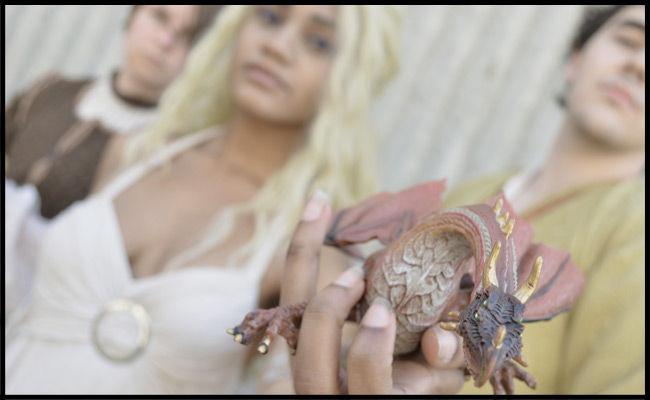 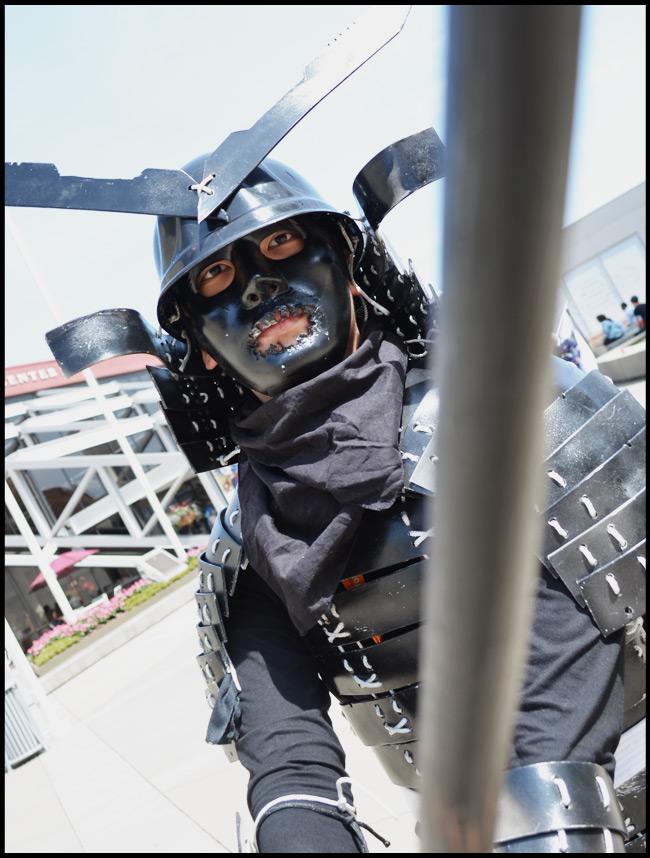 Andrew Pan as a Samurai

Andrew’s Samurai costume took about six months of weekend work to construct, and his attention to detail is impressive. When I asked him why he chose a Samurai costume instead of a famous character from some blockbuster franchise, he said “Uhh. Because Samurais are awesome.”

Strangely enough, this isn’t the first time a Samurai has given this answer. And two Samurais can’t be wrong. 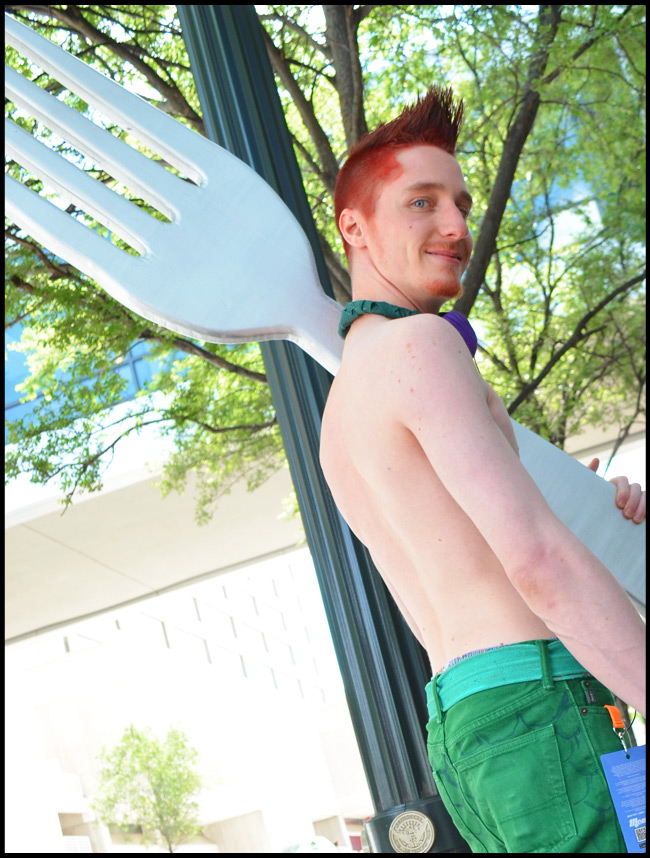 Ariel was the third member of Thor and Loki’s gender-bending trio. The costume was his girlfriend’s idea (Loki), but she wasn’t thrilled with her decision when a few ladies walked by and flirtatiously commented on Ariel’s physique. 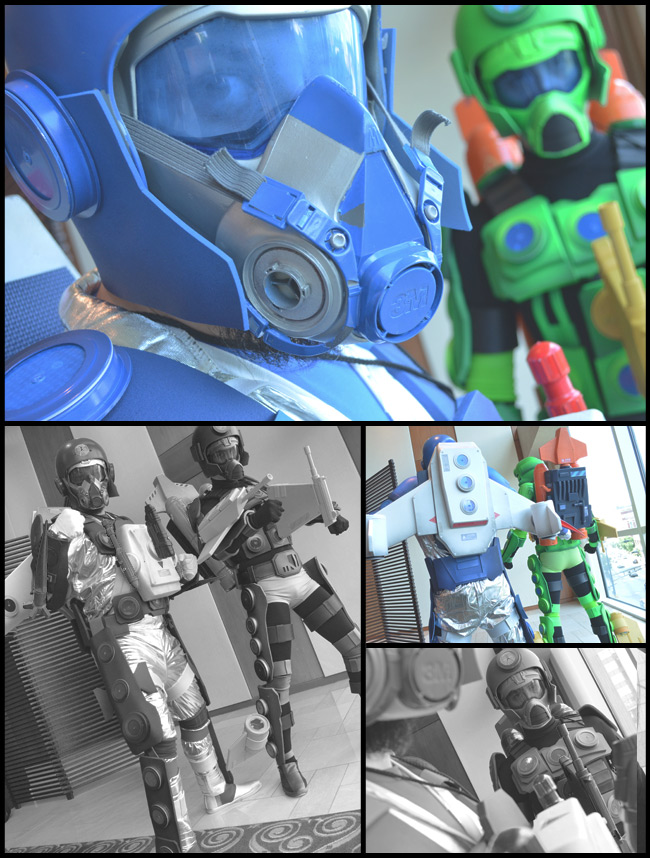 The Centurions is a dangerously underrepresented franchise among cosplayers, but Amil and Rey Parra are trying to change that. The brothers spent months constructing these getups, and debuted them at MomoCon.

“The Centurions was a big part of my childhood, man,” Rey told me. “And I always try to cosplay the things from my childhood that made me happy.” 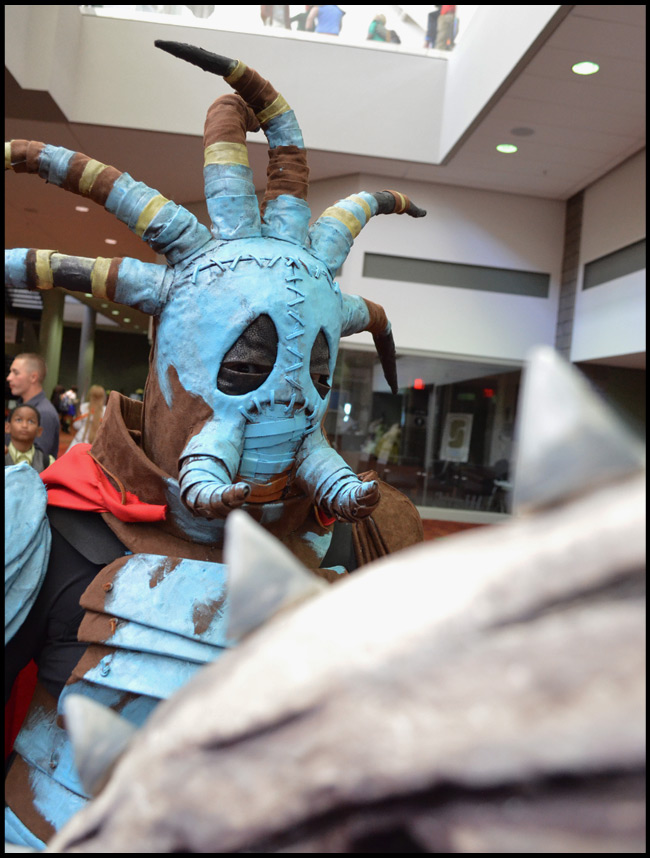 Meet Elizabeth. This is her first costume.

Seriously, this is the first piece of cosplay that she’s ever put together, and some of it was finished in her hotel room just before suiting up.

Elizabeth even admitted that she was a little nervous about the fact that it wasn’t perfect.

“I was worried that other cosplayers would find little details that weren’t quite right,” she told me.

I assured her that everyone was impressed. 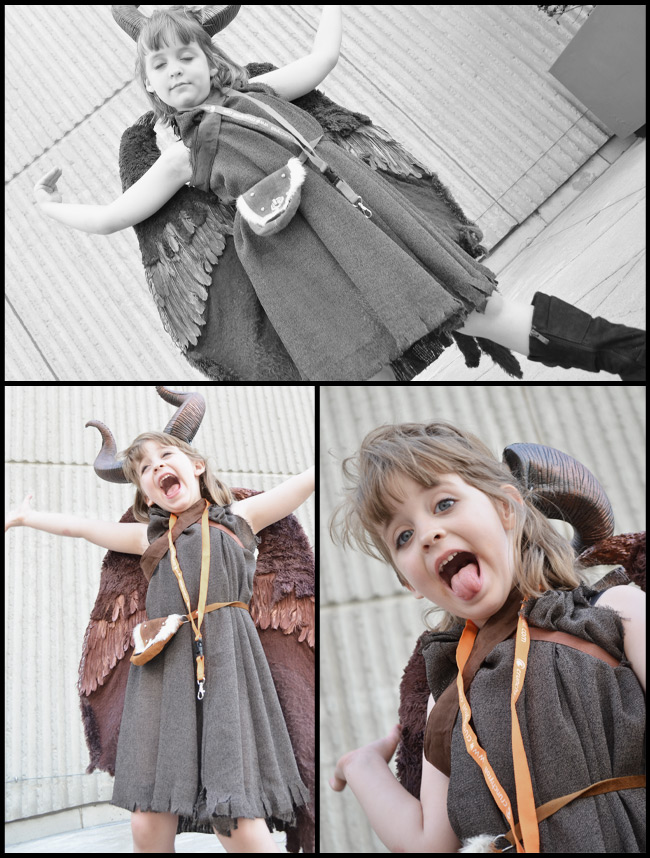 Eliza is only six years old, but she’s already a cosplay pro. She created this Maleficent costume with her mother over a two-week period. And one of mom’s old sweaters was scarified for the greater good.

So, why did she dress up as Maleficent?

“Because I wanted to,” she said. 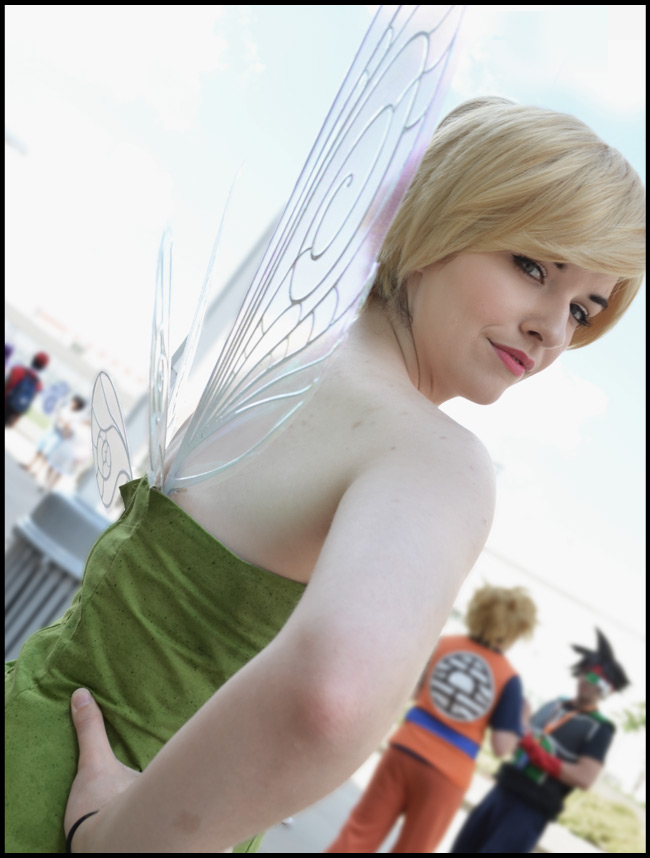 If you’re about to write a comment about how Tinkerbelle doesn’t belong in a “Heroes and Villains” gallery, you obviously need to rewatch that old-school Peter Pan movie.

“When one of my friends asked me why I chose Tinkerbelle,” she told me, “I just reminded her that Tinkerbelle is spunky and so am I.”

If you dig Katlyn’s digs, check her out on Facebook.