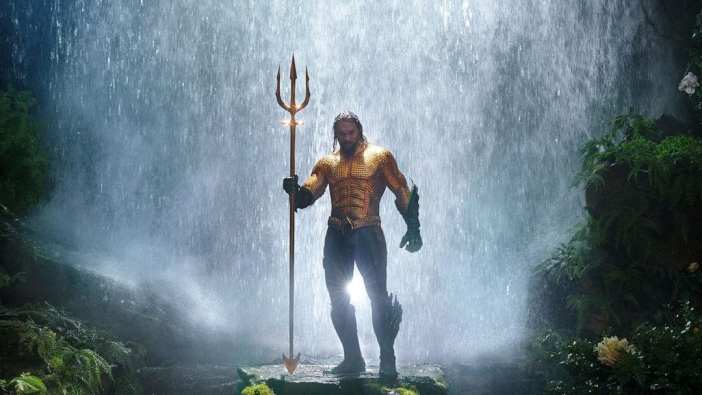 “Trust me, I am no king,” Arthur Curry (Jason Momoa) declares in Aquaman. That’s an admirable sentiment. After all, we here in America agree that hereditary rule is unjust, and people should have a democratic say in electing their leaders.  That’s the basis of our Constitution.

Oddly, though, that’s not the message of the film. Instead, the narrative of Aquaman is all about how Arthur should be the king, and needs to shed his modesty and take up the scepter (or in this case the trident.) The movie is an extended advertisement for monarchy. Take that, George Washington.

Aquaman isn’t alone either. Superhero narratives love kings. Black Panther, Thor, and Wonder Woman are all hereditary nobility, from various exotic, mystical realms. Iron Fist, Iron Man, and Batman all inherit vast fortunes; they’re American royalty in all but name. The United States is supposedly committed to republican virtue and democratic institutions. But our fantasies are awash in blue blood and the glamour of inherited power. Superheroes claim to fight for the little people. But often they end up insisting that what the little people need is some rightful ruler to tell them what to do.

The contradiction between the yearning for justice and the yearning for monarchy is perhaps clearest in Black Panther.  The film has been widely, and rightly, praised for its almost entirely black cast and its explicit critique of racism. Everybody in the movie agrees that the American-led world order oppresses and exploits black people. The main conflict is over how to respond to this. Black Panther/T’Challa (Chadwick Boseman) believes that the super scientific African nation of Wakanda should continue its policy of isolation and nationalist self-sufficiency. T’Challa’s exiled cousin Killmonger (Michael B. Jordan) argues that Wakanda should use its advanced weaponry to liberate the oppressed throughout the world.

T’Challa and Killmonger have policy differences about how best to address the problem of disempowerment and disenfranchisement. You’d think they might try to resolve those differences by empowering and enfranchising people. But nope. T’Challa is a hereditary ruler; what he says goes and most Wakandans get no vote. Killmonger challenges the throne not with a political campaign, but by demanding his right to ritual combat as a member of the royal bloodline. The protagonists, and the movie, claim to want to give a voice to the voiceless, but in Wakanda itself there’s little mechanism for the people to speak. Even the civil war between Killmonger’s partisans and T’Challa’s appears onscreen as an almost exclusively elite affair, with different royals and military leaders choosing one side or the other in a dispute over foreign policy. If the Wakandan populace has a strong preference in their leadership there seems to be no mechanism for them to express it through either government structures or the film’s narrative.

Of course, the movie believes one patriarch is more righteous than the other. The superhero is the true ruler; the supervillain is a rebellious interloper who must be put down. Killmonger, Loki in the Thor films, and Orm in Aquaman are all younger brothers who want to leapfrog the correct line of succession and take the throne from their siblings.

They’re all also conveniently evil. Killmonger kills his girlfriend in cold blood. Loki (Tom Hiddleston) in The Avengers uses magic to control people’s minds and rants about how people should enjoy being enslaved. Orm (Patrick Wilson) engineers a war via deceit and treachery. Kings look more noble when the rebels are all thugs and monsters.

Where usurpers are uniformly bad, rightful heirs are uniformly good and noble. In Aquaman, in particular, Arthur’s initial reluctance to take the throne is how the movie shows that he’s worthy of it. Yet, at the same time, the film insists that Arthur’s the rightful ruler because of his inherited powers and birthright. Arthur’s innate ability to understand and command sea creatures allows him to communicate with the mystical giant crustacean guardian of the super-trident and tell said giant crustacean that he isn’t really worthy, which of course proves that’s exactly what he is. Arthur wins the throne through merit (fighting, winning, being a humble guy) and through heredity. Virtue, prowess, and monarchy just happen to line up neatly with one another.

These myths of monarchy seem to contradict America’s democratic ethos. In the United States, we’re constantly told that if you work hard and behave virtuously (no drugs, no premarital sex), you can move up the social ladder to a position of power, influence, and comfort. According to the anti-monarchist Ben Franklin, good people thrive and become wealthy; bad people fail and end up destitute and sad. Meritocracy means anyone who is good enough can rise. It upends the right of kings.

Superhero narratives, though, call the revolutionary force of meritocracy into some question. If everyone gets what they deserve, as meritocracy claims, then it follows that monarchs have also earned their place. Is Thor worthy to lift his hammer, Aquaman his trident, or King Arthur his sword because they’re especially noble, or because they’ve got noble blood? The stories all deliberately refuse to make that distinction. To be a king is to be kingly. If you have the right to the throne, then you must be the sort of person who should have a throne. The powerful deserve their power.

It’s not that hard to imagine a superhero narrative that took a different approach. Rather than a child of nobility, Aquaman could be a nobody who leads a movement to overthrow an unjust hereditary ruler. Or you could make Killmonger somewhat less murdery and have him be the hero rather than the villain. It shouldn’t be that hard for a nation founded in an anti-monarchical revolution to come up with anti-monarchical heroes.

And yet, despite our history, our heroes are often kings. Maybe it’s partially the nature of superheroes themselves that’s the problem. There are certainly some working-class heroes like Spider-Man and Luke Cage. But when writers and creators are looking for epic conflict, inherited titles can be seductive.  Bottom-up change requires lots of people to work together in solidarity and cooperation. There’s no one leader. Monarchs, in contrast, get to make all the decisions themselves. Stories about superhero kings are a lot less messy than stories about democracy. That’s why we have so many of the former, even at a time when we most need the latter.