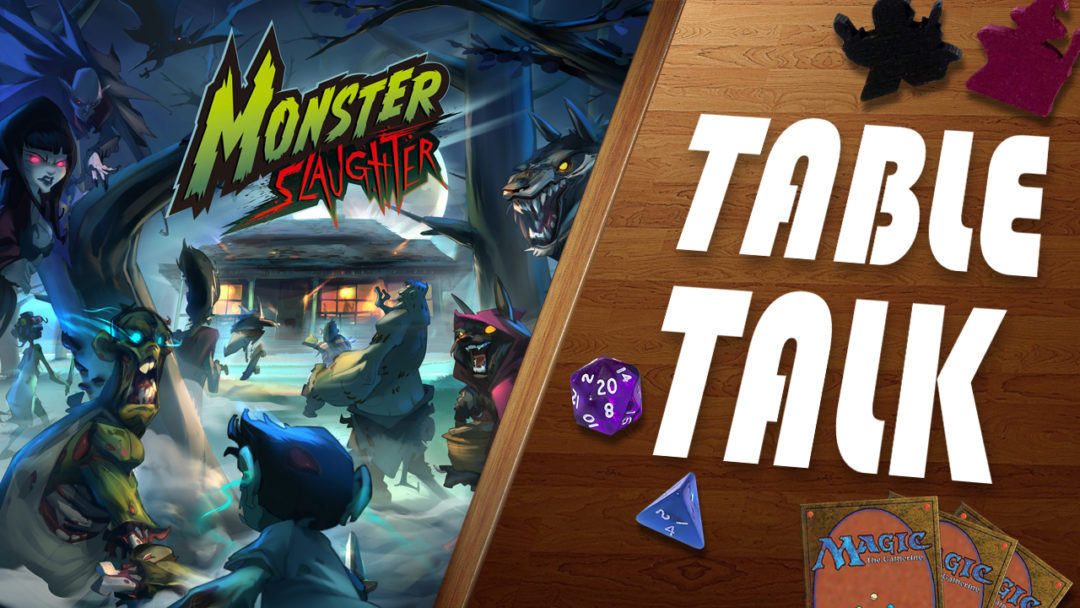 One of the great joys of watching monster horror movies is betting on which of the obnoxious young protagonists will die first. Ankama’s Monster Slaughter makes the practice competitive and puts players in control of ensuring that their predictions come true.

Two-to-five players each control a family of classic monsters like werewolves, vampires, or zombies who have come crashing into a cabin in the woods with the goal of murdering as many college students as possible. Before the game starts, each player lines up tiles representing their preferred kill order for the five students and picks one as a favored meal, meaning they’ll get bonus points if they personally kill them.

Each of the three monsters — father, mother, and child — has a different number of actions they take every round and a variable die pool that they use to succeed at whatever they’re trying to do. The base stats are the same across families, though each group of monsters has its own special power. Werewolves are fast so they get extra free movement, while golems (i.e. Dr. Frankenstein’s creations) are strong and roll an extra die when attacking. 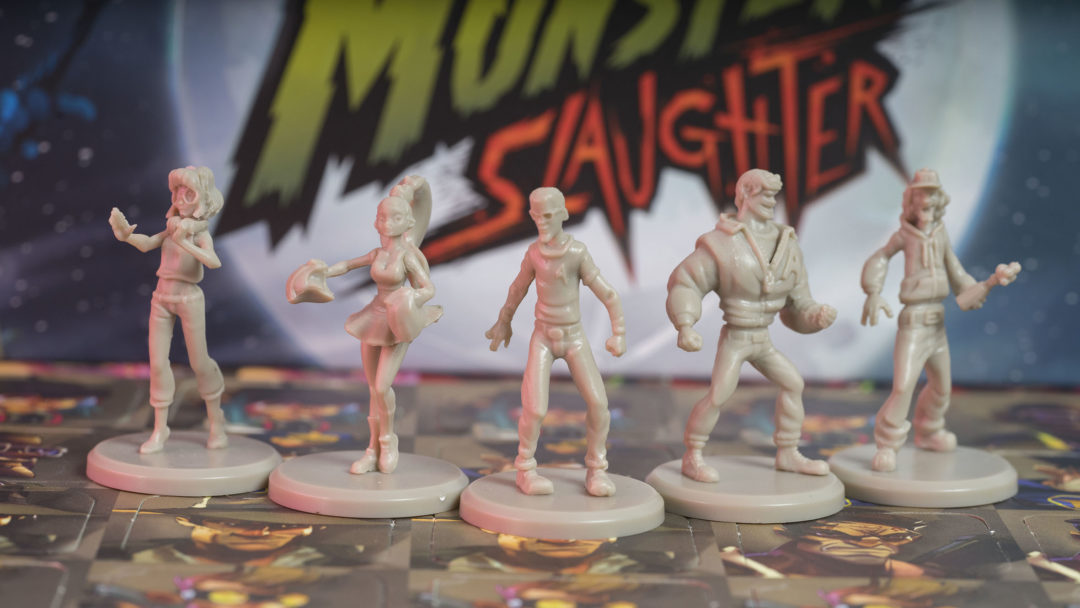 In Monster Slaughter, players take turns choosing which of their family members to activate and have to use all three before they can use another one again. That requires planning things out with strategies like sending the hyperactive kid running around looking for a target and then having the slow but powerful dad move in for the kill. The planning can be disrupted by “nocturnal events,” which change at the start of each round and slightly alter the rules in ways like giving players extra actions or dice, or making the students better at defending themselves.

One of the five students is hiding in each of the five rooms, and the players need to try to find and kill them in the right order. Taking a peek action lets you look at the top card of a room’s deck without moving in, which is really only useful at the start of the game since the student starts on the top of the deck and then hides as soon as you enter the room, forcing you to shuffle the deck and then spend actions searching by drawing cards. Most of these cards are weapons that players can use to defend students from their opponents, though some trigger traps that can mess with the searching monster. There are also a few action cards that can be used for special effects like forcing the students to group together.

When a student’s card is revealed, their figure is put on the map and they can be attacked. Each one has a defensive special ability: the tenacious cheerleader Britney cancels one success rolled against her while the jock Bob will throw monsters out of the room if he survives. Players get points for every damage they do to a student, but they get the most points for confirming their kill order. 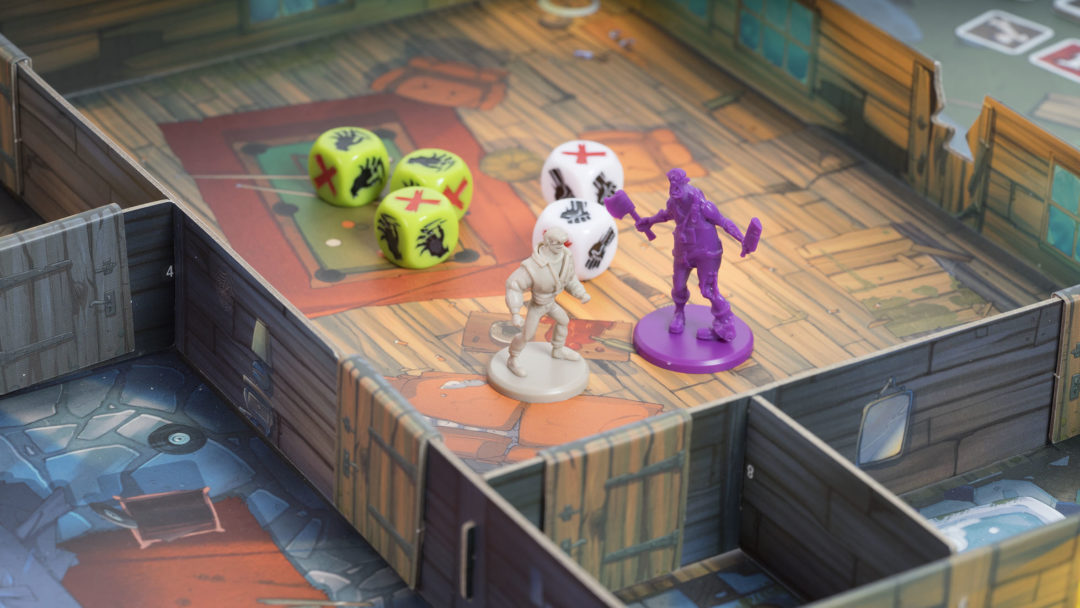 When a student is revealed, you have to make some hard decisions about whether to try to protect them with your cache of weapons and hope you can find your next target before they die, or to try to just get the kill yourself before someone else can. You can try to scare the student and get them to hide again, but the action is really dependent on dice luck and like peeking becomes almost useless later in the game when the decks thin out.

Of course that decision becomes a lot easier if your kill order has already been disrupted. If you had Britney as your first kill but she doesn’t appear until someone else has already died, you should try to rip her apart before anyone else can get bonus points for it. That’s a small consolation prize for the momentum cost of missing your kill predictions. If Bob dies before Britney, you’ve just lost the chance to get the bonus points for both characters while whoever was betting on Bob to bite it first has pulled ahead. The game’s lack of good come-from-behind mechanics can make early failures devastating. There’s also a lot of luck involved when it comes to finding your preferred students, card drawing, and dice rolling.

Physically, Monster Slaughter is wonderfully designed, with hilarious card art and corresponding miniatures for each monster like a werewolf wearing Little Red Riding Hood’s cloak or a zombie mom in curlers. The 3D cabin is physically built on a circular mat that has spots for decks, students, turn tracking, and monsters waiting outside the cabin. Doors and barricades slide in and out of the cabin to represent when they’ve been destroyed or put in place to block progress.

There are a lot of optional rules that add complexity and replay value to Monster Slaughter. A tool shed, represented by an auxiliary building, provides a final refuge for students and is small enough that monsters can’t enter, so they have to attack from outside or scare their victims into running back into the cabin. Party crashers like cops and mad scientists can show up and interfere with the monsters without awarding any points for being maimed or killed. There’s also a scenario book that adds in extra challenges like a fire in the cabin or prepared students that will have set up barricades and armed themselves. Just like in horror movies, these wrinkles aren’t going to save the students, but they might make killing them even more satisfying.