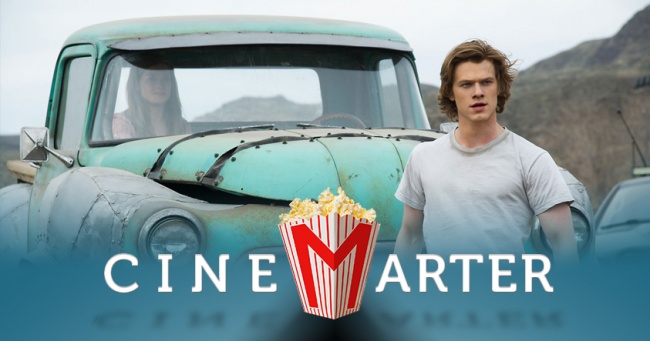 Outside of maybe – and I’d like to put emphasis on the word “maybe” – the four-year-old whose idea got made into it, not a single person on the planet should be surprised that Monster Trucks is an atrocious movie. This is a project that was filmed in 2014, but found its release delayed until the dumping ground that is January. But not January 2015, or even 2016 – it’s coming out in 2017. Paramount, the studio backing it, gave it a budget of $125 million. This is the type of disaster that should result in firings.

The plot – which, I remind you, is based on an idea conjured up by a four-year-old – follows Tripp Coley (Lucas Till), who is a high school student whose only dream is getting some sort of vehicle, because if you live in a small town and you don’t have motorized transportation, you’re a laughing stock. Except that Tripp seems to have a caring mother (Amy Ryan) and a stepfather (Barry Pepper) whom he dislikes for no reason, is relatively popular at school, and even has a girl, Meredith (Jane Levy), who has a massive crush on him. But he won’t be happy until he gets a truck. 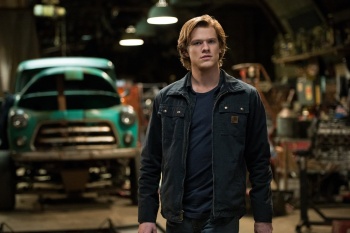 He’s building a truck at the junkyard at which he works. I don’t know how close it is to completion when a monster shows up and somehow functions as a few parts, but he probably could have got it running by now if he wanted. The monster shows up thanks to the evil oil company, which drilled too far into the ground and unleashed it upon the world. Two others were also released, but the company captured them. The one that got free looks like a combination between a dolphin and a squid, makes sounds like a whale, and glows in the dark.

Somehow, it manages to function as car parts, and Tripp can now drive his truck. But the oil company is looking for the monster, so eventually our heroes – Tripp, Meredith, and the monster – will need to take it down and save the two captured creatures. All so the movie can have a mishandled environmentalism message – sorry, but if one of your heroes needs to drink $400 worth of gasoline in order to function, you’re going to struggle to convince us that the oil company is significantly worse, especially when it provides seemingly half the jobs in the town and is only “children’s movie” evil.

Monster Trucks is an early frontrunner for worst movie of the year.

The action scenes we get are all car chases in which the “monster” truck(s) sometimes do things that normal trucks can’t do, like climb walls, but for the most part just run like mediocre versions of normal vehicles. It’s all PG action, too, even though there’s not an insignificant amount of attempted murder, which clashes with that. There are a couple of noticeable re-dubs, too, where entire words were changed, and it makes you wonder if, at one point, the filmmakers were aiming for a PG-13.

You want characters? It doesn’t matter what you want! Tripp has one desire in life prior to the monster showing up, and while that desire changes, he still only gets the one thing. In addition, he’s often a jerk and never suffers any consequences for being so – what a great message for children! Meredith likes Tripp and that’s her entire character arc. The mother shows up for two scenes, one of which isn’t even a speaking scene! The movie tries to paint the stepfather as a sub-villain for doing his job before reversing course so Tripp can discover that, no, he’s actually okay. Danny Glover shows up for a couple of scenes and a paycheck. Rob Lowe is the main villain, and the only thing I know about him is he wants to drill oil in this one specific place. There’s a “bully” in the film who eventually gets his comeuppance but we’re supposed to care why, exactly? And the monster emotes but can’t speak English and has a personality that changes to fit whatever each scene requires.

The dialogue is as simple and idiotic as can be, almost all of it either about each character’s one trait or exposition. Any attempted jokes land flat. What about the monster CGI, which we can only hope consumed most of the movie’s $125 million budget? It’s passable. It’s ugly – by which I mean the monster designs are atrocious and cinema is worse for them existing – but it’s not bad. The monsters interact well with both the world and the individuals within it, never feeling out of place due to poor special effects. If there’s anything close to a “good” thing in this movie, it’s the CGI.

Decent special effects are not enough to even remotely redeem an otherwise worthless waste of time and money. Monster Trucks is an early frontrunner for worst movie of the year – given how long its release was delayed, it probably would have been smarter to save face and just shelve it. Making a movie based on an idea of a child doesn’t often work out – just ask Robert Rodriguez. This is a poorly acted, thinly written movie with terrible characters, lackluster action, awful attempts at jokes, and a mishandled message. It cost $125 million to make.

Bottom Line: Truck this mothertrucking abomination of a movie.

Recommendation: If you pay money to see this movie in theaters, you probably deserve to be disappointed.