Moon Hunters is a story-focused co-op experience, where you and your friends are in search of the truth behind the world’s missing moon.

Moon Hunters started as a Kickstarter that was funded well beyond its goal, raising a factor of four times as much as the original target. This isn’t all that uncommon these days, but it’s still wonderful to see a community rally behind a shared appreciation for a concept. Kitfox Games’ second title, Moon Hunters is a story-focused action RPG, with procedurally generated worlds for you to explore during the multiple playthroughs you’ll need to complete in order to get a fuller picture of the ongoing drama of the game’s universe. Though from my own co-op experience, the most valuable feature it offers is the ability to cater to casual drop-ins looking for some action as well as the story-focused gamers in it for the long haul.

Most of the local co-op titles I’ve been playing recently are entirely geared towards the action, and the story for a large majority of them is non-existent or in a stretch-limo-esque backseat to the gameplay. Moon Hunters isn’t content with just creating an enjoyable action experience – it does this nonetheless – rather it wants to offer a living world for narrative-oriented players to experience and, to some extent, even shape themselves. From what I saw at PAX, in fact, it may well turn out to be one of those few games that draws action players into the story and setting, whether they like it or not. 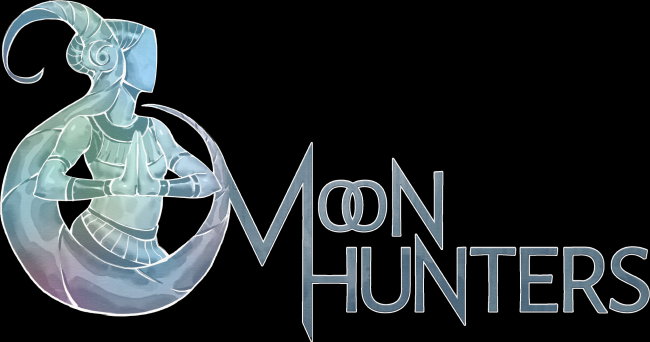 Moon Hunters tosses players into the unenviable position of being responsible for investigating the disappearance of the world’s moon, with the likely culprits being the Sun Cultists, who serve as the game’s primary antagonists. Little else is known at the outset, so you must explore the world to discover clues that might explain the ongoing mystery, while also establishing a general foundation of knowledge of the cultures and their legends and myths. I’ve never been one to read every lore book in games like Skyrim, so it was of particular interest to me that these cultural legends aren’t lengthy blocks of text scattered around the game world, but instead based on your own previous games.

As you’re adventuring, you’ll be presented with choices in various situations. You’ll camp, for example, and have to choose between going out hunting, tending the campfire, sleeping, or any number of other options. Depending on what you choose as well as the results of your attempt, you’ll garner some reputation points in one or more of 11 personality traits. Once that playthrough has ended, your reputation will be immortalized as a legend, based on the trait values you’ve accrued. These legends appear in game as constellations in the night sky, making the game’s entire universe seem fuller and fuller as you commit to more playthroughs, and the night sky is enriched with these constellations.

You’ll have access to four classes at the start, with two more being unlockable through your in-game adventures. Gameplay is relatively simple with an incredibly accessible control scheme, and the co-op experience I had was delightful. It wasn’t necessarily easy to coordinate with random con attendees on what the best plan was for camping and the like, but we had a great time as we hacked and slashed and zapped our way through the demo zones.

As before, I think the greatest strength of Moon Hunters is its ability to engage players with vastly different motivations for gaming. Occasionally, I get really sad when friends come over because they rarely want to watch me play a single-player story-focused RPG. Moon Hunters lets you share the experience with your friends, regardless of whether their affinity is for action or story.

Moon Hunters is slated for a Q1 2016 release on PC via Steam, as well as PS4 and PSVita.