Response to the Halo: Reach video was in some ways predictable, but in other ways less so. What was predictable was the inevitable cry of foul because I have no interest in multiplayer. Co-op is one thing, but that’s basically just single player with a ball and chain (and if you’ve never gotten that impression of co-op, it’s because you’re the ball and chain). But as for competitive multiplayer, I’m sorry, I just don’t see the appeal of playing the same maps over and over again to find out which one out of you is the best at whatever it is you’re doing. That’s not why I’m into gaming. Call me antisocial.

“I still think that saying ‘a game has to stand up on single player alone’ is a very silly statement. So is the quality of an MMO diminished because there’s no mode to grind quests by yourself?”
– ProfessorLayton (not the real one)

But MMOs do have modes to grind quests by yourself. In an MMO like World of Warcraft you’re in a huge playing environment and can take whatever experience you want from it. It’s not like Halo where you have to fanny about with lobbies and logistics and getting everyone on the same server – all the other players are already there incidentally. I did most of WoW single player, only partying when quests were too hard for little ol’ me all by my lonesome. The only parts I’d classify as multiplayer are raids and those team deathmatch things you have to queue up for like fucking fairground rides. But I digress.

What was less predictable about the Halo: Reach responses was that everyone seemed surprised I didn’t rip on it more. I guess its timing was good. It caught me during a time when I’m having a big negative phase for “realistic” games with all that tiresome cover-based shooting, and anything with the slightest retro lilt is refreshing. Even if Halo is only retro because it has refused to update its core gameplay in any way in the last nine years.

But I did notice a few responses from Halo fanboys who made declarations along the lines that I am in total agreement with them and think Halo: Reach is great. As if criticism is only about giving some kind of binary yes or no, with everything that gets rescued from the big sucking drain being of equal merit. That’s definitely not the impression I want anyone going away with. The kindest thing I can say (and indeed did say) about Halo: Reach is that it’s basically inoffensive. It’ll certainly pass the time and it even has a few fleeting impressive moments, but I’d be very surprised if I even remember it at the end of the year, let alone stick it in the Top Five.

It’s adequate, that’s all. Mediocre. Halo remains what it has always been to me: strictly rent-only – at best. But in the interest of clarifying my position, here are some more reasons why it didn’t set my pants alight.

As I said, the gameplay is the same as always. There is that one brief space combat mission, but I refuse to call it a new element added to the Halo formula because the Halo formula is still there, unchanged, with the space combat being nothing more than an interlude. It’s woven into the gameplay in the same way a commercial break is woven into the story of this week’s Inspector Morse. As for the formula itself it’s a sparse, nuts-and-bolts kind of first-person shooter, with the same enemies, weapons and vehicles in each game, and light on anything one could call a puzzle or a boss fight. The physics tend to have a floaty feel to them, especially where the main character is concerned. I’m led to understand from ancillary media that a Spartan warrior in full armor is supposed to weigh, like, a ton. Bollocks he does. He jumps around like he’s tied to a weather balloon. And those flying vehicles never seem to have any trouble taking off when you (or, indeed, several Spartans) are on board, and all I see are helicopter propellors, not magic fairy wands. 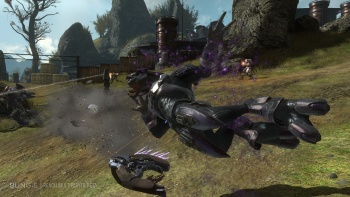 While the gameplay is at least functional it’s the sheer blandness of the story that spreads the thickest layer of wallpaper paste over the experience. The advantage of a prequel is that it’s an opportunity to make a game new players can enjoy without needing the background of previous games – that’s why Metal Gear Solid 3 was one of the best in the series. Halo: Reach spurns this opportunity. I get the strong impression that there are a lot of things we’re expected to already know. The arrival of the alien Covenant on Reach occurs with very little ceremony, and towards the end of the story everything hinges on transporting a mysterious AI off-world. While we know this AI is Cortana, setting off the chain of events of Halos 1 to 3 that ultimately culminate in human victory, nobody should know that for sure at this time. But everyone’s so immediately convinced without argument that they all throw their lives away to make sure the MacGuffin reaches its destination. The plot was in dire need of an audience surrogate character, someone to ask the important questions like what we’re doing, and why everyone’s wetting their knickers about a bit of glowy pipe, and why an AI is on a bit of glowy pipe rather than, say, a USB stick.

And the characters were impossible to sympathize with and dull. Every single one of the buggers were highly-skilled self-assured professionals who followed orders impeccably and nobly self-sacrifice at the drop of a hat. This might sound a bit culturally insensitive, but Spartans must go through a similar training regimen to suicide bombers. As I said in the review, all the members of Noble Team have all become engaged in a “Who Can Die The Noblest Death” competition, but none of them show the slightest emotional connection to anyone or anything (one of them has a mum, but their interactions are so cold and loveless she might as well have been his driving instructor), so the sheer regularity with which they knock themselves off is closer to comedy than tragedy. I guess the only reason Master Chief was the last Spartan was because he was out sick while everyone else was at Kamikaze school.

The other thing is that if you’re making a first person game, you need to make a decision – are you going to characterize your lead, cutting away from the first person perspective for cutscenes and zooming into the back of their head when gameplay resumes, or will you take the Half-Life/Bioshock route, stay in first person permanently and let the player project their personality (don’t say that sentence out loud ‘cos you’ll get saliva all over your computer screen). Halo: Reach’s habit of switching between first-person and third-person cutscenes feels undirected. There were moments when I felt staying in first-person would have made a scene much more effective. Particularly the bit when your mate throws you off a space station as part of his Noble Death competition entry and you fall through space watching the ship drift off into the distance before silently exploding. It felt immersion-breaking to keep cutting away to reveal that, yes, you’re still falling through space, and have you noticed this skybox we made? Nice, isn’t it?

Right, that should give you a few more points to argue over in the comments. If not, here’re a few more: Master Chief shows most of the classic signs of a closeted homosexual, Cortana is actually the ghost of his dead aunt, and that shirt you’re wearing makes you look fat.