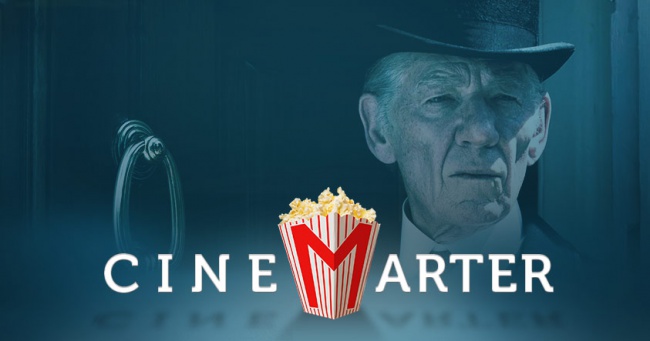 I don’t think we’ve ever seen Sherlock Holmes presented as old as he is in Mr. Holmes. We join him at the age of 93, three decades after he retired from solving mysteries, with his memory beginning to fail him. The film probably would have worked better if it had just focused on this – on a man having to come to terms with his greatest asset, his mind, starting to deteriorate; on a complete debunking of the myths surrounding his fame; on the interactions between him and a young admirer. We get all of that here, but unfortunately we also have to flash back to the mystery that ended his career.

The problem with this is not inherent to the premise, which sees Holmes (Ian McKellen) trying to write the true story of this case – not the fictionalized and romanticized version that his partner, Dr. Watson, published. However, his memory is failing, so he only winds up recalling so much at a time. Whenever he does, we flash back to 30 years earlier and get a few more bits and pieces of the case. In theory, this could work; in practice, it ruins the pacing of the film. 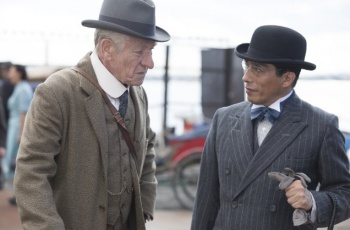 Some films are able to build momentum with an idea like this. Perhaps the best example is Cloud Atlas, which tied together the themes and plots of six stories and seamlessly transitioned between the two. Mr. Holmes, conversely, halts its momentum almost completely every time we flip between timelines. We start to become invested in the story of an elderly Holmes, only to then go back in time to a case we don’t particularly care about. When the mystery starts to get intriguing, the memory ends and we go back to the older Holmes, almost in turn forgetting where we were with him. The stories don’t mirror each other or have any real connectivity, which means that each time we flip between them there’s a lack of cohesion – at least until the end, at which point it was already too late. By the time it uses this idea to tie together a single theme – is it a surprise to say that it involves the struggle between logic and emotion? – it’s already started and stopped so frequently that it’s almost too much of a struggle to pay attention to what it’s trying to say.

It’s not just a typical Sherlock Holmes mystery, of which we’ve had conservatively three trillion adaptations.

It’s a real shame that this filmmaking technique hinders the rest of the film as much as it does, as there’s a lot of great work put in here. Ian McKellen is wonderful both as a younger Holmes as well as a frail, forgetful 93-year-old. His compelling screen presence makes Mr. Holmes worth seeing on its own. The makeup used to make him appear significantly older than McKellen is looks great, but then you add in a bunch of mannerisms from McKellen and you never for a second believe he’s a spry 76 in real life. Laura Linney is wonderful as Holmes’ housekeeper, and Milo Parker, as her son, delivers a decent enough child performance. All of the scenes with 93-year-old Holmes are compelling on their own, and even the mystery from 30 years older probably would have made for a fun little movie. It’s just that they don’t come together to benefit each other. It’s detrimental to include both, especially with the way that the film tries to do it.

Still, at least there’s an attempt – an effort – to do something different. It’s not just a typical Sherlock Holmes mystery, of which we’ve had conservatively three trillion adaptations. It wants to be deeper. It wants to be a morality tale. And it also wants to deliver to us a relatively compelling mystery. You can tell the effort and the love was there; it just didn’t quite work out. Is the movie still entertaining? For the most part, sure. Does it also have a glaring problem that keeps it from being great? Yes, it does. But it’s not from a lack of ambition or effort. It never feels cynical or as if it was telling the story to cash in on the name “Sherlock Holmes.” The filmmakers wanted to deliver a different take on the character, and even though it’s not a complete success, they did just that.

Bottom Line: Only a moderate success thanks to a flashback technique that fails it, Mr. Holmes offers a different take on its eponymous character – although unfortunately not a great one.

Recommendation: Fans of Ian McKellen or Sherlock Holmes will want to check out Mr. Holmes; for most other people, it won’t be worth the watch.