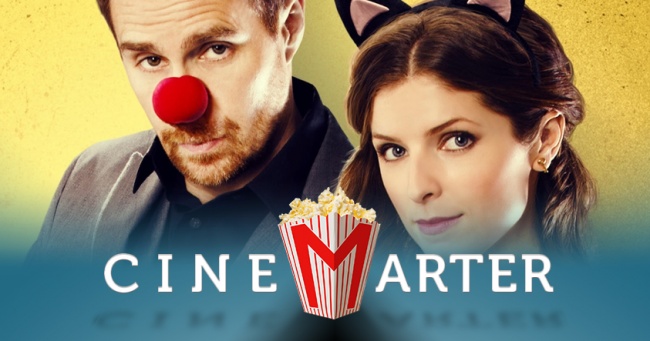 The “him and her” rom-com is an idea that sounds better on paper than it often works in practice. The premise behind it is sound: a genre that combines elements that both parties on a date night will find enjoyable, ensuring that everyone goes home happy. The women get the romance, while the men get some action. This plan – quite frankly based on an outdated, sexist position – usually results in one of two things: the blandest, least interesting type of movie possible, or an unmitigated disaster. Mr. Right, on the other hand, actually succeeds in pulling this off. It’s a rom-com, but it’s also an action movie – and a pretty insane and funny one at that.

Penned by Max Landis and directed by Paco Cabezas, Mr. Right opens up with a pretty clever idea. Sam Rockwell stars as Mr. Right, a hitman who turns his attentions toward the people who hire him, not his targets. Why? “Murder’s wrong.” Is that hypocritical? “Nobody’s perfect.” He has Neo-like reflexes and he puts on a big red clown nose before performing the hit, which sums up almost exactly how the whole movie plays out. The stakes to the action scenes aren’t high, but they’re pretty fun, and the film has a manic, silly sense of humor to keep us laughing throughout. 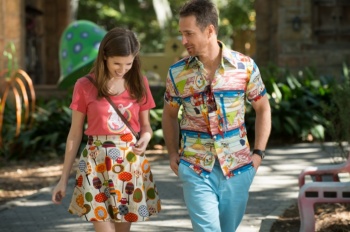 Along the way, Mr. Right meets Martha (Anna Kendrick), who just went through a bad breakup and, despite almost all signs pointing toward “danger,” decides that hanging out with Mr. Right – without even learning his name for a large chunk of the film – is in her best interests. They fit well with one another, even though he’s certifiable and she, too, may be missing a few marbles. Or maybe they fit well because of those characteristics.

The plot ultimately becomes irrelevant, existing merely to put these characters in new situations and locales, and give them new baddies to face off against. Tim Roth shows up as someone who’s been tracking Mr. Right for several years, and there’s a subplot about someone wanting to hire Mr. Right on behalf of his brother to take control of the family gang, but we’re mostly here to watch the random antics of Mr. Right and Martha.

Because of this, Mr. Right is a film whose success rests on the shoulders of three individuals. The first two are the lead actors, Sam Rockwell and Anna Kendrick. Rockwell is one of the most underrated actors working, always a hoot at the movies. He’s both charming and immensely funny, and makes his character work so well. Anna Kendrick pulls off the awkward, slightly crazy role perfectly – and together, the actors have such a strong chemistry that watching them banter or pretty much do anything together is inherently enjoyable.

Despite a relatively inconsequential story, Mr. Right is the type of movie that I have no problem recommending.

The third person is screenwriter Max Landis, whose previous work in Hollywood hasn’t exactly worked out. Outside of Chronicle, which I still hope we as a collective reevaluate after Josh Trank‘s Fantastic disaster, his other two screenplays were American Ultra and Victor Frankenstein. The former is closer to Mr. Right in terms of quality, while the latter is just awful – and both of them were far from successful at the box office. Here, with so much of the film resting on the dialogue between the two leads, he has his first, as far as I’m concerned, real success.

I don’t know if everyone’s going to love Mr. Right – in fact, I’m fairly certain that its destiny is that of semi-cult status, if that. It’s just a little too weird, and a little too reliant on its oddball comedy and lead actors, to find an enormous amount of success. But that’s the thing: it’s different. Critics often find themselves loving “different” films more than the audience, and I think that’s simply due to the number of films each group sees. If you find yourself wanting something different – and a movie with elements for both “him and her,” then Mr. Right might be up your alley.

Despite a relatively inconsequential story, Mr. Right is the type of movie that I have no problem recommending. It’s a shining example of a “him and her rom-com,” one that successfully mixes fun action into an oddball romantic comedy – and will have audiences looking for any of those elements walking away happy. Sam Rockwell and Anna Kendrick are great, showcasing tremendous comedic timing and chemistry, as well as decent action chops. Max Landis’ screenplay is great, Paco Cabezas’ direction is manic enough to keep us from getting bored, and while the film’s certainly “different,” it’s a good different, and one that I think you should watch.

Recommendation: Looking for a different kind of rom-com? Mr. Right might just be worth your time.