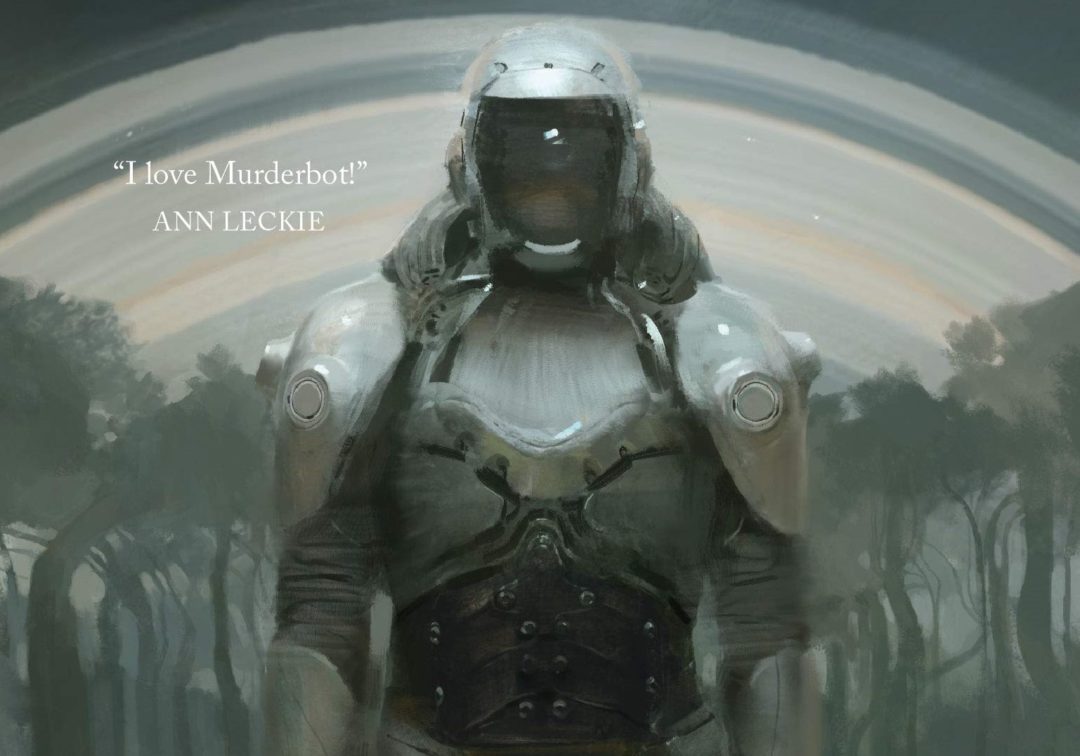 Robots in fiction have from the beginning been used to talk about how gender is constructed and how gender constructs us. In Karel Čapek’s 1921 play R.U.R., which introduced the word robot to the world, humans build organic artificial people to do all their work for them. Robbed of the ennobling power of labor, humankind becomes sterile, and unable to reproduce. The first 1984 Terminator film imagined its robot assassin as the hyper masculine Arnold Schwarzenegger, hugely muscled and ruthlessly unstoppable. In contrast, 2013’s Her presents an AI as a perfect girlfriend who anticipates her twee boyfriend’s every emotional need.

Martha Wells’ 2017-2018 series The Murderbot Diaries takes all those past examples of gendered robots, and uses them to build something different. The four far future science fiction Murderbot novellas are told from the perspective of a security drone cyborg that has hacked its programming so that it is no longer under the control of its human owners.

The security unit (or SecUnit)  calls itself Murderbot because of an unfortunate past incident when it went rogue and killed a large number of humans. Its pronouns are “it/its” because, as it explains matter of factly, “I don’t have any gender or sex-related parts (if a construct has those you’re a sexbot in a brothel, not a murderbot.)” Nor does it want any sex-related parts. When a friendly ship’s computer offers to provide it with some to help it blend in, it reacts with horror. “I had seen humans having sex on the entertainment feed and on my contracts when I had been required to record everything the clients said and did. No, thank you, no. No.”

As a construct without a binary gender, Murderbot is a constant reminder of how much our ideas about gender construct our expectations. A bulky faceless deadly cyborg killer with super strength and lots of guns might lead most readers to think of Murderbot as male. But while Murderbot can kill people, it isn’t enthusiastic about it. As it dryly observes, “As a heartless killing machine, I was a terrible failure.”

Instead, what Murderbot really loves is consuming endless episodes of that quintessentially feminized genre: soap opera serials. Wells has built a Terminator who is obsessed with the far future equivalent of The Young and the Restless.

Murderbot reads as male in some ways and as female in others. It reminds readers that we interpret actions or character in a different light depending on the gender of the person involved.

Murderbot’s main personality trait is an overwhelming shyness; it finds dealing with humans and human emotions excruciatingly embarrassing and painful. It keeps its faceplate up at all times in order to avoid having to make eye contact. The idea of having a human talk to it about its feelings “was so painful I dropped to 97 percent efficiency.” Sometimes it gets so stressed out that it will stop in the middle of a conversation with people to just go stand in a corner.

If Murderbot were a woman, it’s extreme shyness might seem like an example of stereotypical female domestic modesty. If it were a man, running into the corner to avoid human contact might make it a kind of nerd or geek stereotype — especially considering Murderbot’s facility with hacking computers.

But Murderbot isn’t a man or a woman, so its shyness can’t be easily explained as part of masculine or feminine programming. It’s shy because it’s a shy Murderbot, not because of its chromosomes. Since it was built without gender, Murderbot quietly (from behind its faceplate) points out the extent to which gendered expectations are soldered onto people. It takes a person constructed without gender to show how much of a construct gender can be.

Just because a lot of gender is constructed, doesn’t mean that gender doesn’t matter or that it isn’t real. If Murderbot were a man or a woman with genitals, it would be very different — which is presumably why it shudders at the idea of having those bits attached. There are some other nonbinary characters in the series, but Murderbot doesn’t feel any particular commonality with them. Their gender and its gender have some superficial similarities, but while individual difference is informed by gender, it isn’t defined by it.

Part of the reason that gender doesn’t define people in the Murderbot Diaries is that it isn’t a gender theory kind of book. There are lots of great science-fiction novels that deliberately explore the relationship between gender and society, like Ursula K. Le Guin’s The Left Hand of Darkness or Joanna Russ’ The Female Man.Wells doesn’t have those kinds of ambitions. As a result the Murderbot books are in some ways more revolutionary than their predecessors. Le Guin imagined a planet full of nonbinary people, but her hero was still a man; Russ imagined a world of women, but still presented trans women as artificial and disgusting. Wells’ future is less programmatic, which is perhaps why its protagonist’s metal legs can steps so easily out of the usual conventions and cubicles.

To the extent Murderbot Diaries has a message, it’s just that the hero (or heroine) isn’t always the person that you’d expect. Protagonists, like robots, are generally built out of old parts: a tragic backstory is soldered onto a romance narrative and then both are hammered onto a shiny gender expectation, or glitching gender anxiety.

Murderbot isn’t created from scratch, but it’s put together differently enough that even the most well-worn bits and pieces gleam with new possibilities. After reading Murderbot Diaries, you start to wonder if that testosterone-fueled Terminator ever pauses in its relentless pursuit to binge its favorite television show, or if the female AI ever gets tired of providing emotional support and just wants to hide to avoid conversation. Murderbot makes it clear that our gender programming is more idiosyncratic than most stories, or most robots, would have you believe.