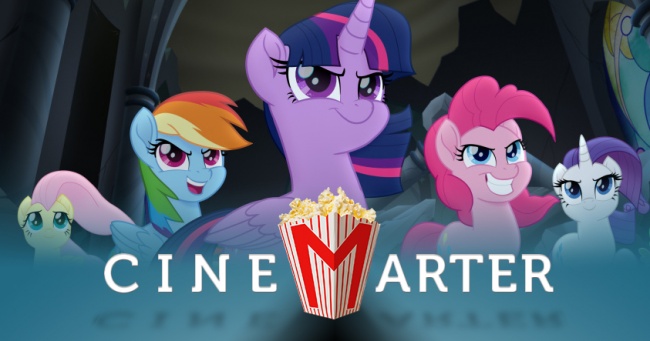 In the year 2010, back when the internet was still fun, Hasbro decided to create another TV show based on its My Little Pony toy line. It was aimed at pre-teen girls but, for reasons that will never be fully understood by humanity, was embraced by older males in their 20s and 30s. Normally, that’s not a problem, as almost everyone likes things that are not made “for” them. But the “bronies,” as they have since become known as, it was an obsession. Many of them started using pony puns and .gifs in conversations and areas that were not receptive to them, then cried “oppression” when others reacted negatively.

Anyway, it became something of a contentious issue for a year or two until the bronies got tired of showcasing their love of a show for children with the world. I’ve been told that part of the reason for this was because the showrunner, Lauren Faust, left midway through the second season and the show declined in quality in the seasons that followed. 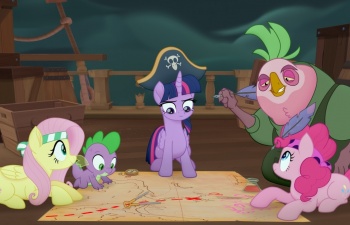 I mention all this because there are, without a doubt, going to be people out there wondering why exactly this movie exists, and who it’s for. It’s important to understand that it’s not just being released for 6-year-old girls who like the pony toys; it’s also for the 20-to-30-year-old males who have given the show and the toy line a larger boom in views and sales than the target audience. And, well, because the “brony” thing is kind of fascinating, honestly, and there’s a documentary called Bronies: The Extremely Unexpected Adult Fans of My Little Pony that dives even further into it.

This new movie, which plays out like a longer, high-stakes episode of the show, follows a bunch of ponies, the “mane six” – I looked it up – as they go on a journey to figure out a way to stop evil from taking over Equestria. There’s the Storm King (voice of Liev Schreiber), who sent Tempest (Emily Blunt) to do his evil bidding, and the ponies now have to seek the help of a different group in order to regain their land. Along the way, they meet various groups of people who at first don’t seem very helpful but thanks to the Power of FriendshipTM will come around to the ponies’ side.

Those who are already fans of My Little Pony will get to see their favorite ponies on a bigger screen and facing a bigger foe than I assume they’ve ever faced before.

It’s all very twee and silly. Your tolerance for sugar-infused nonsense will largely determine whether or not you’ll find anything to like with My Little Pony: The Movie. Then again, if you don’t watch the show, you won’t find a lot to like in the first place.

Standalone stories like this, even ones based on or continuing existing properties, usually make some attempt to give us a sense of the characters and the universe in which the story is taking place. My Little Pony: The Movie has no such aim. If you don’t know these characters going in, you’ll have very little idea of what they’re like afterward, beyond the obvious, superficial details, like how the pink one appears to perpetually dip into a supply of cocaine, the orange one grew up on a farm, and the white-ish one is very vain. The “lead” is called Twilight Sparkle (Tara Strong), whose mission in life is to spread friendship across the land, I guess. That’s her magic power. 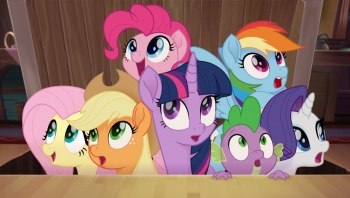 You don’t get depth or development. You get simple themes, like “friendship is good.” There are a bunch of songs, none of which are particularly good or memorable. A couple of jokes land, but most of them fall flat. The animation is good and the vocal performances are strong. But two positives in a movie that’s largely absent of anything worthwhile isn’t going to be enough to endear those not already indoctrinated into this fanbase.

Those who are already fans of My Little Pony will get to see their favorite ponies on a bigger screen and facing a bigger foe than I assume they’ve ever faced before. It’s a nicer looking, bigger stakes episode of the TV show that runs for 100 minutes instead of 22. If that sounds like something you’d like, then you’ll probably enjoy the movie. If you dislike the ponies or have no previous attachment to this franchise, you will want to look elsewhere for an enjoyable animated movie.

Bottom Line: My Little Pony: The Movie is a longer, better animated episode of the TV show.

Recommendation: My Little Pony: The Movie is for fans only.