To close out the student series of Inside Job, I want to recklessly tackle head-on what appears to me a glaring lack in most game education programs: a definition system for a degree in game design. It is a lack for specific reasons, and most of them noble: there is currently no university that has definitively established what category game design even falls under, and if you can’t place a discipline, what business do you have instructing an entire program? Some colleges, particularly smaller ones hungry to differentiate themselves from larger, slower research institutions, have made the claim that they teach game design, but the vast majority of them don’t live up to their claims even remotely. There is currently such lack of definition in the game education field that it is possible to find universities staffing game design classes with graphic design instructors without a single game title to their name.

I find this to be deceptive and egregious on its face, but unfortunately the only solution comes with the passage of time and the retirement of experienced game designers into the teaching field, something that is only in its first phases. This lack of definition, though, also makes it interesting to explore game education more conceptually: What program, I asked myself, could create a perfect game designer, one that would scare me into fearing for my job?

(I also figured that if game design is awesome, then designing a game designer might be, in fact, the road to awe itself.)

The IGDA’s game education SIG recently completed its 2007 Curriculum Framework, a boilerplate document intended to provide educators with a starting point for their development of game education programs. Most of these programs currently offer degrees in “game development,” at least the ones that are not being so dishonest as to claim that they’re teaching “game design” without the necessary expertise.

The problem is that, while I appreciate their honesty, I’m not exactly sure what a “game development” or “game production” degree prepares you to perform. A “game studies” degree seems like it might be more specific, but, similar to a degree in literature, most likely specifically prepares you to become a professor of “game studies” and not much else.

Practically speaking, most roles in game development are covered by other areas of study: programming by computer science, art by art studies of various kinds, production by management. The discipline that is the true black box remains game design – the thing everyone wants to do, but nearly no one can actually describe or define.

What is game design?
The problem of where to put a game design program is complex, and comes down to game design still being a square peg surrounded by round holes. I’ve argued that it’s a subset of sociology, but it is likely – and dangerous – that nearly any strong humanities school could effectively house a small department in interactive studies. However, because the actual study and application of game design is most closely connected to mathematics, keeping a department populated purely with humanities specialists would be a great oversight. Ideally I think a game design department, if it can’t be purely interdisciplinary, belongs in cognitive science, philosophy (analytical), or sociology.

Game design is many things, but its core objectives basically come down to:
1. making a game in your head – a game that works and is fun – and testing it in your head before you waste a whole lot of other people’s time implementing it; and
2. communicating this design so effectively that, assuming sufficient exchange of time for expertise, anyone with the willpower could implement your design and achieve the desired result.

Obviously, number one is excruciatingly difficult, and is what we spend so much time trying to define. But it does mean that systems of modeling – high level math being first among them, but also arguably narrative – have equally significant impact. The nature of games as encapsulated social systems – to borrow from Dr. Eliot Avedon – or encapsulated worlds is what makes them both intuitive (sometimes deceptively so) and complex.

Number two is simpler but by no means simple in itself. It primarily involves writing but is assisted by management science and psychology. Touching base on all of these brings us to … 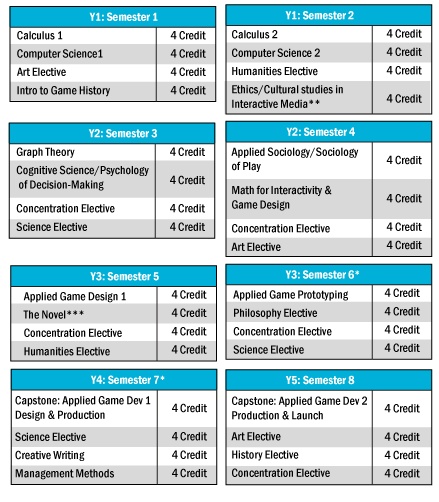 The Curriculum: Preface and Goals
I knew that when I blocked out this column, what I wanted to do was create a game design curriculum from “blue sky” standards. In other words, I wanted to do what every game designer wants to do, and make a perfect scenario with no kowtowing to such limitations as resource availability or practical economic feasibility whatsoever.

However, acknowledging that all game design is in fact about intentional limitations, what I decided on was a core program that remains its own discipline but pulls individual courses from other fields as much as possible. This was both out of a desire for my effort to have some utility and to avoid a lot of reinvention of the wheel that goes on in some programs. I do believe that, while game design is distinctly its own discipline, it is related to many others and benefits greatly from their instruction.

What you’re going to see here is a degree that has a lot of:

* Either (but not both) of these semesters can potentially be replaced by a co-op position as a game designer or a game development internship. Ideally the co-op position would be concurrent with a previous or following summer internship to get maximum exposure time to a title in progress.
** What I mean here is effectively “game studies” or “games and society” or some form of rigorous cultural study looking at the intersection of games and modern society – what they signify, who they impact, etc. I do think that this course should be designed and instructed by a philosophy professor specializing in ethics, preferably one who knows a lot of Kant, but that last is my own personal bias.
***I’ve seen courses called this in many places, but to be specific, this should be a course taught by a literature professor specifically about novels, how they are structured, and involve long papers of in-depth literary analysis. The position this holds is intended to provide a study of storytelling hybridized with the philosophical discipline of presenting an organized analytical argument.

Concentrations
As game design matures and the field grows, we’re seeing an increased incidence of specialization even within the field of game design itself. Experience designing one type of title does not necessarily qualify one to design another type. While certain principles apply to all game design branches, different specific types of study will uniquely benefit specific types of game design. These concentrations are intended to provide guidance in selecting academic courses to fill elective space (not just specific concentration electives but science and art electives as well) as well as practical emphasis guidance in specific activities sought in internships in ideal situations.

The following is intended to be (like the rest of this) a rough framework or suggested starting place for game design concentrations:

* I should note here that by “game content design” I do not mean “narrative design” even though I’m suggesting the word narrative with narratology, nor do I mean “game writer”, which should really be a traditionally educated writer (and there are many schools implied when I say “tradition,” including the Ray Bradbury School of Hard Knocks) who also studies games. These are separate fields that enhance game design but are not game design and deserve “homes” in their own programs. I think that a perfect game writing degree would probably be something more like a creative writing/scriptwriting major with a game studies or game design minor.

Why This is Important
Game developers and academics have been reluctant to build bridges toward each other out of varying levels of xenophobia and mutual resentment. The reason why building those bridges and actually establishing a language and context to learn and study game design is important comes down to quality of life in terms of how our effectiveness at practicing our craft impacts all that we do. Game design is itself the crucial planning and management phase core to game development, and if we can’t utilize the great engine of academia to figure out how to do it better, we are shooting ourselves in the foot.

There is a second level of quality of life impact in that we need to be aware of where our game developers go when they leave the commercial field. In an ideal world, we would each make scads of money off of the royalties (yeah, that’s another column) of our wildly successful games – but chances are that, for most of us, this won’t be the case: whether because we don’t make scads of money or because we never become the type of people bored enough to retire into watching reruns of Judge Judy all day.

I don’t intend that this is by any means comprehensive or definitive, but the important thing is that we initiate and actively participate in the conversation.