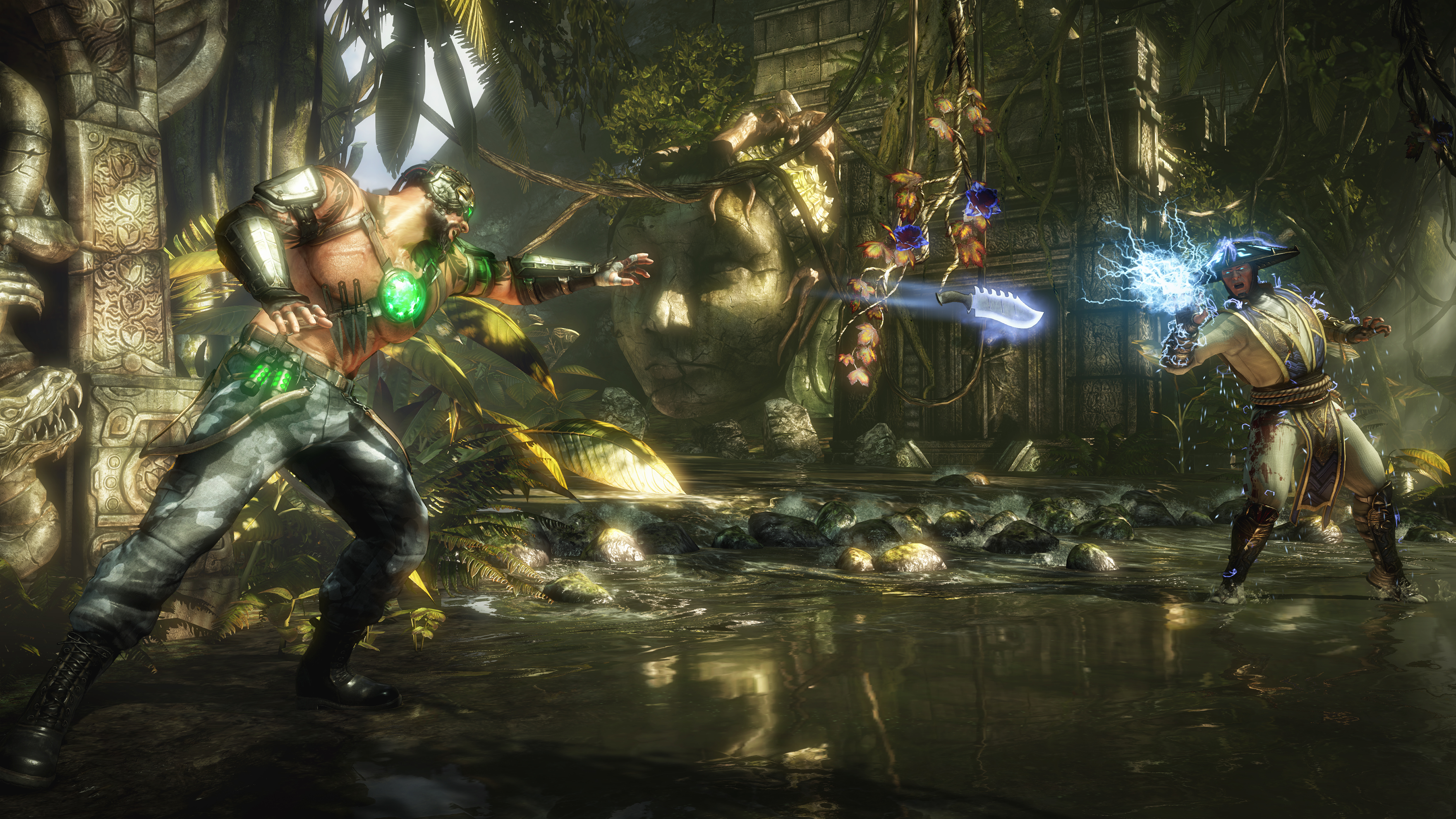 The narrative continuity of an average one-on-one fighter is more convoluted than that of a FROM Software game. Street Fighter 4 for example is about an international fighting tournament of astonishing complexity. Every single quick match and drunken late-night two-player mashfest is taking place as part of that tournament, possibly as unofficial training bouts. They are presumably to be distributed among the many parallel timelines the game depicts, one for each playable character as they take turns to be the plucky protagonist rising up the tower mode, ultimately defeating the final boss and emerging as victor.

Continuity’s even weirder in a game like Mortal Kombat where characters are routinely murdering each other, so any fight involving, say, Sub Zero can’t be taking place after any of the seven million alternative continuities in which Sub Zero was horribly murdered in the ring. Unless the characters are all getting magically resurrected afterwards, which going by the events of the story campaign wouldn’t be too hard to swallow, but it does rather undermine the ‘mortal’ part of the title.

Don’t be silly, Yahtzee, the canon continuity of Mortal Kombat X is taking place within the story campaign, obviously, why else would it be there. A pretty convoluted story in itself, I’d say. It’s about a civil war going on in Outworld, refugees flooding the Earthrealm, and a secret plot by an evil death god to conquer the world. Although I didn’t see how his ability to make the sky turn all red and scary illustrated his suitability for government. Thankfully he is discouraged from the venture before he can embarrass himself at the first UN meeting.

The one thing that does not happen in this mess of a plot is a fighting tournament. Which is sort of my point, because in that case, I’m not sure what business all the characters have to be scrapping each other in the labyrinth of tower, challenge, and quick fight modes. It would be nice to have some context to explain why Johnny Cage would want to brutally fight his own teenage daughter to the death and then smash her face into the pavement until her head bursts. 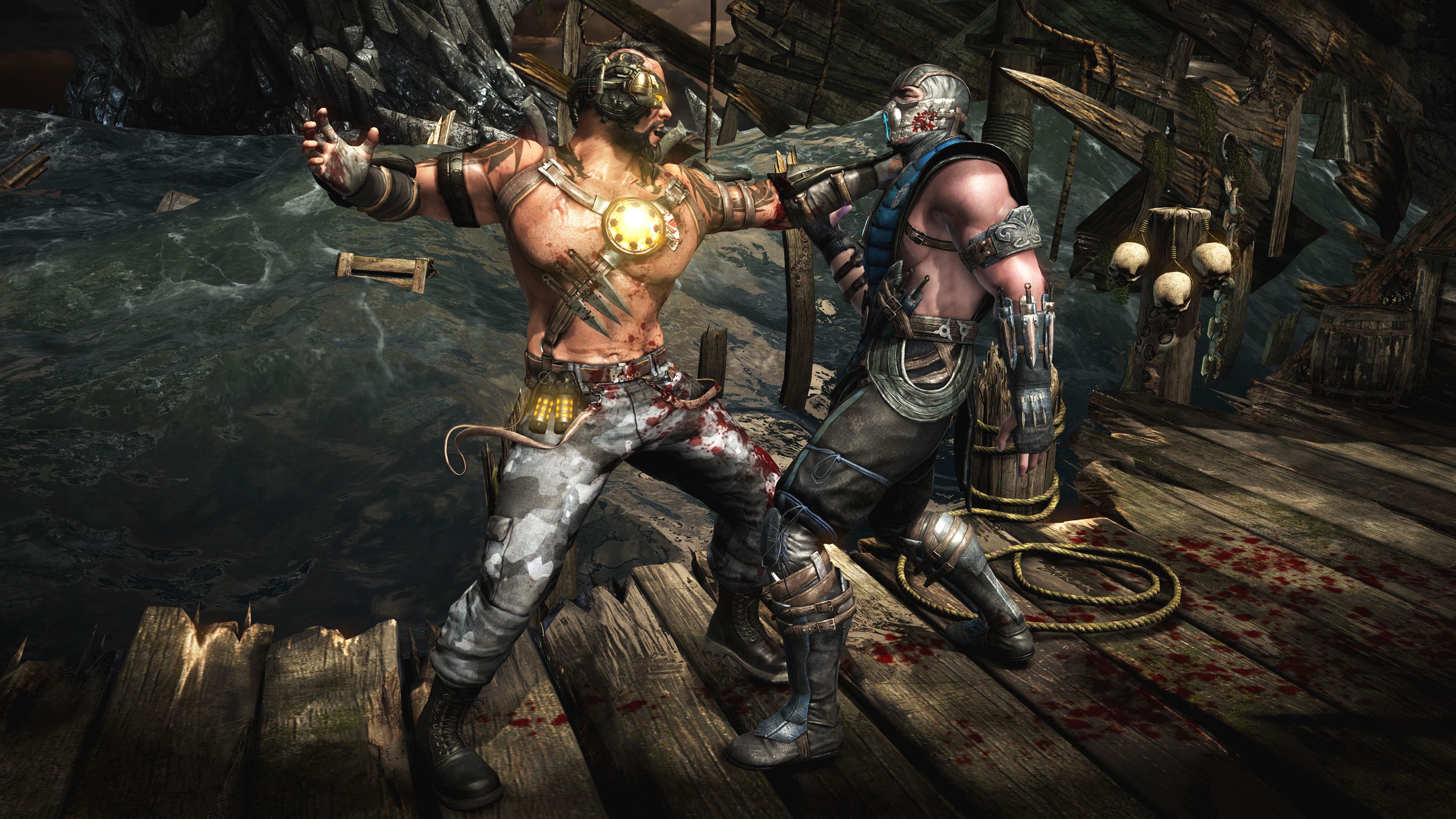 Now, I admit that I’m not terribly interested in the gameplay of one-on-one fighters because it’s not my idea of fun. I do however have a great interest in interactive narrative, and that’s why one-on-one fighters are still on my radar, even if I don’t want to play them. I’ll happily watch some friends twat each other to a pulp because it’s nice to see interesting characters in action. See, I know some people will say in response to the previous paragraph that the tower mode of a fighting game like MKX doesn’t need context, and I will say that they are wronger than a pack of o-wrong-utans swinging through the jungle the wrong way. If a fighting game needs no context, then why isn’t the character roster just a selection of untextured shop window mannequins with slightly different hats?

Traditional narrative has made us buy into the notion that story can only ever be presented linearly from beginning to end, but the age of video games has brought us interactive narrative, and the old rules need not apply. I would argue that the traditional one-on-one fighter is an example of alternative, non-linear storytelling that has been under our noses this whole time. The setting is almost always that there is a fighting tournament going on and all these colorful dudes and dudettes have shown up to enter, but that’s just the backing board. A fighting game is essentially a pure exploration of character; larger-than-life figures conveying themselves through their extravagant appearances and their idiosyncratic movements. Stripped of the formalities of traditional plot, we can only make immediate emotional connections to characters from appearance alone. That then leads us to want to discover their back stories through the odd dialogue line and ending sequence.

In this environment, the traditional linear plot takes a step back. All of these characters are equally qualified to take on the mantle of ‘protagonist’, it all depends on which ones the player takes an interest in, and wants to see succeed, either by beating the boss and getting their ending or just from beating up everybody else a million times. The ‘It’s a fighting tournament’ plot is utterly cheap and shallow, but that’s all it needs to be. It has only one job: to put a hundred million random fights into context and give meaning to the multitude of characters as they explode from the screen. 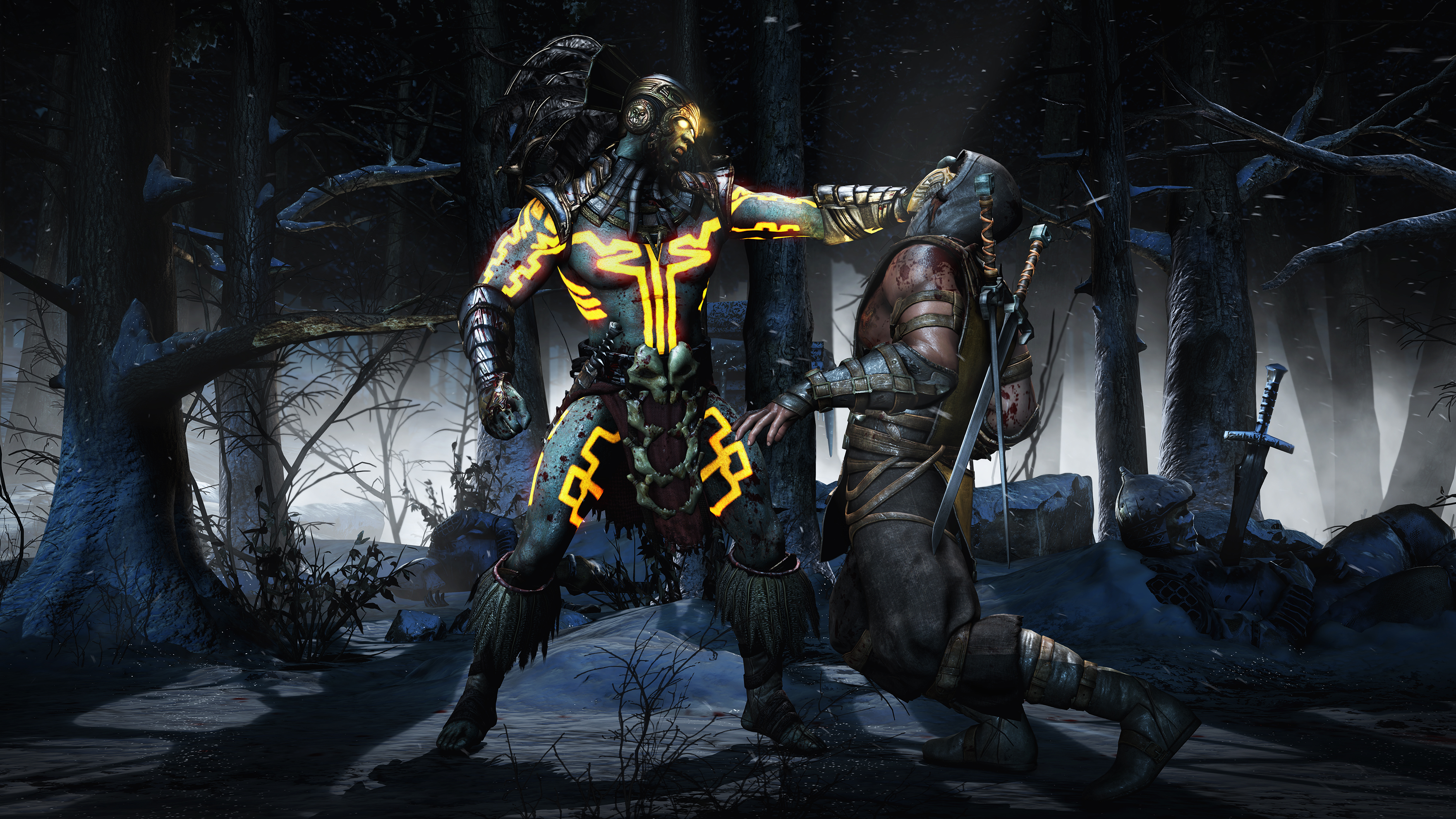 I happen to think that’s really neat, but MKX (as well as Netherrealm’s previous fighters like Injustice and MK9) misses this point completely. Its attempt to have a linear film-like narrative that disclaims all context and continuity from the random fights feels terribly misguided. The necessities of the format are fairly toxic to a traditional linear narrative – it constantly switches between characters to showcase them all, coming across as schizophrenic as a result. And without the nurturing context of ‘it’s a fighting tournament’, it must instead come up with an endless slew of contrived reasons for two characters to fight each other one on one, when it would frequently make much more sense for them to talk things out, or for nearby allies to either break them up or join in.

And what with a lot of the new characters being the young sidekicks of existing characters, they are dependent on the story establishing them, and can’t punch their weight in the contest of pure visual characterization. Outside of the story I would have dismissed Cassie Cage and Jacqui Briggs as interracial twins who buy clothes at the same military disposals shop. The two characters that did pass the instant-characterization test for me were Erron Black and Ferra/Tor. At one glance I instantly knew I wanted to know more about them, so of course they are among the characters that the story campaign never gets around to focusing on.

You know what it feels like? The story campaign of MKX feels like a shitty film (such as, just for example’s sake, Mortal Kombat Annihilation), and the rest of the game, all the tower modes and quick matches etc, feel like the shitty, knocked-together video game adaptation of that film. Where they couldn’t think of anything else to do so they just plonked all the characters into a fighting game together with no explanation. You see, fighting games are a bit like orgies. Without at least some kind of context you might accidentally find yourself putting something sticky up an immediate relative.

Distant Super-Earth May Be Lit From Massive Volcanoes