Developed by Ghost Games. Published by EA. Released on 3 November, 2015. Available on Xbox One and PS4 (Reviewed). Review code/copy provided by publisher.

I’ve always felt that the Need for Speed franchise was at its strongest with NFS: Underground and its sequel. Since then, I’ve been pining for a game with as much personality and detail. After taking a year off from annual releases, Ghost Games and EA have returned with a new installment that blends the customization and nighttime urban setting from NFS: Underground with the open-world elements of NFS: Most Wanted. It sounds good in theory, but it falls far short in its execution. 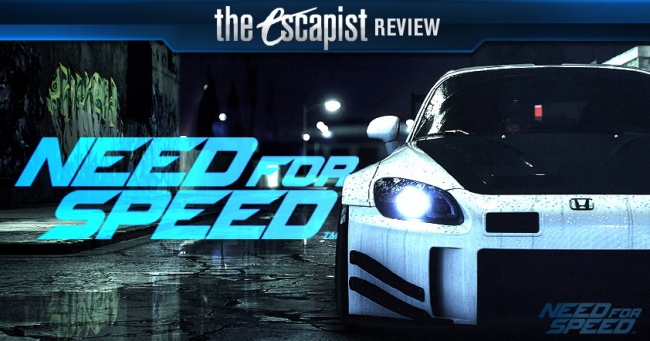 Need for Speed is beautiful. There are times when the game looks incredibly real-and I’m not talking about the cutscenes. Illuminated by artificial light, the nighttime streets of Ventura Bay are a sight to behold as the neon lights cascade through your field of view, reflected by asphalt slick from rain. The changing weather is a nice touch, and shows off the superb visuals that rival Sony’s graphically-stunning DriveClub.

Like previous entries in the series, Need for Speed has a great soundtrack made up largely of electronic music, with tracks from The Chemical Brothers and Avicii. The whole selection was put together by DJ Photek, who did a fine job picking the songs. In addition to the EDM, there’s a good selection of rock music that plays during drift events. The soundtrack selection changes when you’re roaming, tuning your car, racing, or in a drift event.

However beautiful the city is, I’m not without complaint. Whereas DriveClub offers five visually distinctive locales spanning over dozens of tracks, Need for Speed takes place in a city so small that you’ll be driving down the same roads throughout the course of the game. It gets old.

The ability to free-roam feels pointless, as it’s far easier (and less annoying) to zip from event to event with the fast travel option. The police in the open world are relatively easy to evade at low heat levels due to their bad driving AI, but at higher heat levels they’re annoying to deal with when you’re just trying to get to an event. If there could be a trade-off, I would prefer to have seen more race tracks instead of an open-world map.

As every event is part of a larger open environment, they can be disorienting. I had to rely on the blue line indicator as a guide through each race because the tracks themselves are never obvious, and there are random roadworks and obstacles scattered throughout the map. It doesn’t really help you predict turns, so I often found myself restarting the race to get a proper feel of the track layout. It’s especially bad when you’re driving at full speed and need to make a sudden 90-degree turn on a blind corner, which happens all the time. Having a mini-map helps a little, but looking at it requires you to look away from the action.

No matter how well you drive, the racing is further hampered by cheating drivers that “rubberband” towards you when you’re in pole position, which leads to some annoying and unfair losses. It’s not rewarding to master the game when the computer just cheats and overtakes you when you make an error.

The forced story elements further compound the game’s problems. The story is impossible to ignore. If you want to partake in events, you’ll have to deal with the game’s cast of characters, who are Vine-addicted social media enthusiasts and every racing movie stereotype wrapped up in one (or five, as the case may be). Remember how annoying it was to get phone calls from GTA 4‘s Roman Bellic asking you to hang out? Imagine an assortment of annoying characters who constantly remind you that there’s an event nearby, even while you’re already in a race. The only way to stop them from ever bothering you again is to complete the game’s main storyline.

The story takes place over the course of about a hundred races (many of which take place on the same track areas), interspersed with some of the most cringe-worthy FMV that EA has ever conceived. You could make a drinking game out of the fully vocalized, nonsensical hashtags and the first-person fistbumping that happens every few minutes. Given the artificial drama of the “plot” and its array of poorly written characters, all of whom would likely fail the Turing test for being as one-dimensional as an online meme generator, the presence of a story simply gets in the way of the racing. You could at least ignore NFS: Rivals‘ “police vs. anonymous vigilante” storyline that only cropped up between level-ups.

While the story is mercifully short, it – like the small city – betrays the game’s lack of content. There aren’t that many cars to drive, at least compared to other racing games like Project CARS and Forza 6. The game tries to make up for this with customization, but it falls short even then. Out of the box, the options are disappointingly limited, with a poorly designed color picker, zero options for neon underglow lighting (a favorite from NFS: Underground), roof scoops, and other bodywork elements that were central to the Autosculpt feature in earlier titles. Some of these limitations are being addressed in already-announced updates, but for now the game feels incomplete.

The multiplayer offerings don’t fare much better. Like NFS: Rivals, Need for Speed is always online. You can drive around until you meet other players, or party up with a group of friends to do an event – after meeting them at a designated location, of course. Unlike other racing games, there’s no matchmaking system to facilitate racing against strangers. There are no event playlists or anything of the sort. Unless you have friends to play with, getting into online races is a joyless and tedious experience. On top of that, you can never pause the game, even when you’re in the middle of a single-player event.

Bottom Line: Given the lack of content, the game feels like a work-in-progress with some poorly conceived features and contrivances that only diminish the game’s few strengths.

Recommendation: If you’re looking to pick up a good arcade racing game, Need for Speed might be worth looking at in a few months time when it’s cheaper and more fully-featured.