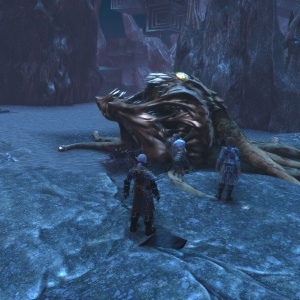 Neverwinter is an MMO that knows exactly what it wants to accomplish, and does so very well. The developers of Neverwinter at Cryptic know what makes people (especially Dungeons & Dragons nerds) able to play the same game for hundreds of hours without flagging: gratifying, crunchy combat, and a permanent sense of purpose. Neverwinter takes the most satisfying aspects of D&D‘s 4th edition in terms of combat and development, and turns it into a D&D adventure that left me squeeing with the joy of seeing my favorite monsters and mechanics. However, along with the great things about 4th edition, Neverwinter takes on some of the bad, being a highly linear game in both content and mechanical progression.

Neverwinter succeeds at making each class’ gameplay unique and pulpy, with moves such as an earthshattering blow from a Guardian Fighter, that get you excited to use them each and every single time you click the mouse or press a key. Every class has flavorful, delightfully brutal attacks that make even the most mundane of fetch or kill quests (of which there are some) into an opportunity to lay the smack-down on some unsuspecting orcs. For perhaps the first time ever, I intentionally went out of my way in Neverwinter to grind mobs while questing, just so that I could find new and interesting ways to use my moves together. Because each class has a unique Class Ability, they all play very differently, giving the game a lot of replay value. The Guardian Fighter, for example, has a Block ability, rather than the Dodge that most other classes have, allowing them to withstand heavy blows from enemies that other PCs would have to evade. Similarly, the Control Wizard’s short-range Teleport ability allows them to quickly navigate any combat situation, heavily reinforcing the feel of pure control over any situation.

The major disappointment I have with Neverwinter is the same one I often complain about in 4th Edition – the purely linear progression. In nearly every aspect of the game from the story to class progression, I knew that I was being moved along a specifically designed path. Though I am not opposed to linearity, I felt as if I wasn’t actually making any kind of actual decisions for my character at all. Neverwinter displayed its linearity by using a hub-and-spoke questing system which ferried me from area to area as I leveled up. I went straight from town to wherever my 3-4 quests were located, killed all of the bad guys, and then back to town, without any memorable rhythm breaks. The design choice to exclude an over-world also reflects this linear mentality; each map is zoned off from the rest of the game, and although there is still tons of room to explore, Neverwinter often feels closed and static.

Although the theme-park style of Neverwinter was certainly a turn-off for me, the player-generated content of the Foundry is the genuine savior of the game’s long-term health. The Foundry provides players infinite hours of questing, hand-written and created by other players, and with a place for players to offer suggestions to one another, a Foundry community has flourished during the beta. Many of the Foundry quests are superior to the game’s actual quests, and while leveling my alt, used the Foundry for the bulk of my questing. Many of the Foundry quests explore deeper into the Forgotten Realms universe, and offer players a With infinite quests, players don’t need to simply jump onto the gear-grinding track at level 60 and begin running the epic treadmill. Questing is definitely one of the strengths of Neverwinter, and by allowing players to make and run their own quests forever, the designers have provided a healthy alternative to the demands of end-game play for those who are less interested in the typical MMO lifestyle. 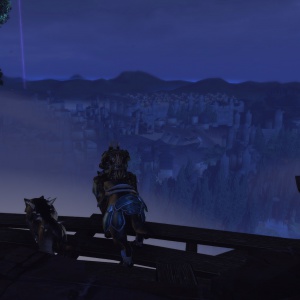 For those who are interested in the MMO lifestyle, content at max level is slim right now. That said, after over 150 hours on my first character, I have still not entered the “final dungeon” – Castle Never – and with Gauntlgrym available at launch, the “lack of endgame” complaint feels hollow. Cryptic has been throwing content at us faster than an overly-zealous mage shoots Magic Missiles at the darkness, and their End of Open Beta event has me squeezing in a few extra minutes of game time between everything else I do, my personal benchmark for MMO enjoyment. With the first free expansion, Fury of the Feywild, set to launch sometime this summer, the Neverwinter team has a lot on the horizon. For now, though, the content coming out has been enjoyable and original, while maintaining a very true D&D style. If Cryptic can keep up a production cycle like they have been in the last few weeks, then Neverwinter players will have nothing to worry about.

The Zen Market (Neverwinter‘s real money shop) is something that has been surrounded by some controversy, especially in the discussion of free to play versus pay to win. The case against the Zen Market doesn’t hold much water in Neverwinter, as players can buy or sell Zen or Market bought items via in-game currency. Players who want to enjoy the game without spending a single dollar will never have to, and the majority of the items in the market are cosmetic rather than functional. That said, Neverwinter does have a few places that hits you where it hurts. They give you very limited bag and bank space, and even respeccing your character to try new feats needs to be purchased with real money. Although being charged for respeccing feels a little bit like a slap in the face, spending a few dollars in this game goes a really long way. Cryptic has recently announced permanent price reductions on a number of items in the Zen Shop, which not only obviously makes the game cheaper to play, but gives credibility to Cryptic’s willingness to appease players.

As both a D&D and MMO player, Neverwinter earns a big thumbs up, but it may not have what it takes to become your day-to-day MMO. Neverwinter will be a great game to play alongside other games or for a casual gamer to jump on and quest around for a few hours a week, at least until more endgame content is released. The user-generated content of the Foundry adds endless playability, but beyond engaging with that community, the need to purchase bag space and respecs may grate on some players. Neverwinter definitely has a lot to offer, but just because it’s free to play doesn’t mean it’s actually free to play.

Bottom Line: Neverwinter is an extremely fun adaptation of D&D‘s 4th Edition, with all of its strengths and weaknesses. Though the game is arduously linear at times, they’ve made the roller coaster gameplay into a wild ride with beautiful environments, and just the right amount of freedom to explore.

Recommendation: Dungeons & Dragons fans will enjoy this game for the iconic feel that the game has, and for the huge host of favorite monsters that Cryptic has included. Spending some money is almost a must, but the bang for your buck can get you far if you spend it wisely. Casual and social gamers will have a blast playing through this with their friends, while more hardcore MMO players might want to take a pass for something more dedicated.