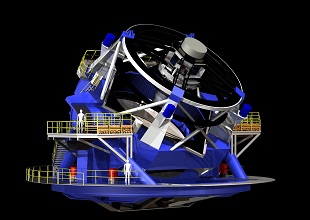 The Large Synoptic Survey Telescope can do in three days what the Hubble can do…in 120 years.

A new telescope being built by a giant consortium of schools, governments and private donors celebrated a major milestone this past weekend, as its mirror assembly construction is finally complete.

The Large Synoptic Survey Telescope, or LSST for short, will have the largest convex mirror ever constructed. The 27.6-foot-wide (8.4 meters) mirror and its assembly, built at the University of Arizona, weighs about 20 tons. The final product will give astonomers never before seen views of the galaxy, and beyond.

How “never before seen,” are we talking here? If the Hubble Space Telescope were to scan the entire southern sky, it would take the 25-year-old telescope (improvements excluded) 120 years to complete. The LSST, which will live in the mountains of Chile’s Atacama Desert, can do the same job in three nights.

That impressive number is crucially important for both space exploration in a number of ways. Not only can the LSST help out with the search for habitable exoplanets, but it can also lend its massive hand to asteroid and comet tracking, something every space-facing institution is currently struggling with. Being able to scan half the viewable sky in a matter of days, only to repeat the process in another three days the next week or month, allows even the most distant objects to be tracked and triangulated.

The entire project has a cost of about $700 million, with the cash coming from a number of sources. Along with funding from the National Science Foundation, the LSST is being funded by private investors (including Bill Gates and fellow former Microsoft exec Charles Simonyi), corporations like Google, too many colleges and universities to list (Carnegie Mellon and Johns Hopkins among them), and other government-tied entities (like Los Alamos and Livermore Labs). The full list of participants is here.

Earlier tests aside, the LSST should be fully operational sometime in 2021.