There are a lot of things I don’t get about certain tropes that are common to the Japanese style of game. Like the whole “visual novel” thing that uses all the advanced gaming technology at our disposal to recreate Fighting Fantasy books occasionally with still images of hardcore fucking. Or why everyone has to be dressed in such an eccentric manner. Or what the fuck kind of gravitational force is operating upon those titties to make them bounce about like that.

But for all those things I can concede that they cater to certain tastes: Respectively, people who like reading without having to risk papercuts, fashion enthusiasts, and babies of nursing age. What I really don’t get is the attitude of setting up puzzles for the player and then preventing the player from having to do anything to solve it themselves.

I complained about this waaay back when I did The World Ends With You, in which the player character is given a piss-easy riddle but cannot actually solve the riddle until the game has balls-out told him the answer to the riddle. What is the thinking behind this sequence? Are they treating the game like an episode of Poirot or whatever, where if you figure out the solution you’re expected to sit still and be quiet until the protagonist figures it out and you see how correct you were? Would it be redundant of me to point out that this is supposed to be a videogame? TWEWY wasn’t so shy about making us play the shitty combat. Apparently that’s all we’re good for.

And Ni No Kuni pulls shit like this at every turn. There’s a potentially interesting albeit ethically questionable mechanic in which the protagonist has the ability to extract positive qualities from twat A and inject them into twat B in order to “fix” twat B’s personality. Only with the consent of twat A, granted, but none of the various twat A’s you encounter seem to fully understand what it is you’re proposing to do when they voice assent. There are various different aspects that can be captured and stored, such as “enthusiasm” and “restraint” (although I would have thought that an excess of one of those could be mistaken for an excess of the other). Where gameplay comes into it is figuring out what quality a seemingly affected person is lacking.

Except the game always specifically tells you what that quality is, usually in the most unnecessarily drawn-out way in a series of meandering dialogue boxes with the name of the missing quality highlighted in a different, more vibrant text color. Not only that, but the game won’t even let you cast the spell until you’ve sat through these things. I feel like I’m being talked down to. You can imagine all the lines being spoken very slowly by a tourist in a foreign country attempting to communicate with a local.

This happens so much in Japanese games – later Zelda games do it a fair bit as well – and it cannot possibly be in the name of enhancing the gameplay. I believe it may be part of the unspoken secondary goal of Ni No Kuni and quite a few other JRPGs: to fanny the player about as much as possible. It’s not good enough to travel from town 2 to town 3 to get on a ship to town 4, fending off random encounters all the way; once you actually get to town 3 you’re informed you can’t get on the ship until you have a letter of introduction, meaning you have to go all the way back to town 2. At this point, instead of making progress, we are basically running laps. 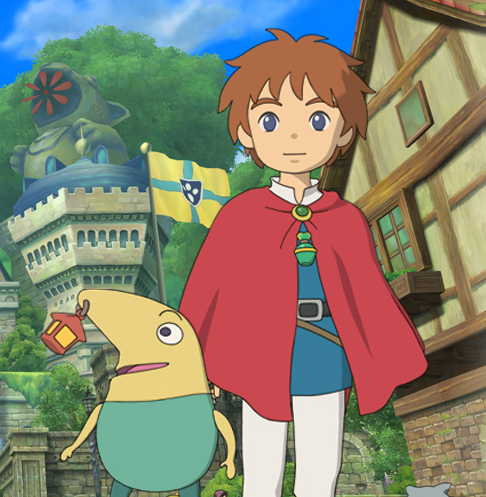 Then again, Ni No Kuni is a kiddie game, so handholding the player like a fussy mother trying to teach her daughter how to cook may be entirely reasonable. Kids have notoriously short attention spans, the little twats, so obviously you have to turn most of the gameplay into “talk to these people in the correct order, and we have etched the correct order onto the surface of your eyeball.” So that explains that. But you forgot one thing, Mr. Bond: there’s also combat, and it’s an absolute arse.

One would think if you were catering for an audience that has to be constantly supervised, lest it stick every loose object within grabbing range up its nose, then you wouldn’t make the combat so unnecessarily messy. Have multiple familiars, sure, all the kids like to poke the mons these days, but do we really have to micro-manage all their sodding equipment as well, swapping it all out every single time we switch the current lineup around? Not to mention having to decide what sweeties to force-feed them with for the associated buffs. The toughness of enemy monsters makes a bit of a drastic jump at certain points in the plot, too, necessitating a certain amount of grind if you haven’t been doing enough faffing about. There’s an inherent paradox in a game with both this and aggressive hand-holding.

And as I said, the AI-controlled party members in battle really are spectacularly useless, refusing to use familiars with appropriate strengths, not defending, and scarcely worth resurrecting if they fall. You know what occurs to me might have worked better? A system where the combat is separated into phases (or “turns” if you will) so that you can give a simple instruction to each party member at the start of each “turn” before everyone starts whacking at each other’s shins with bits of wood.

But to return to the “kiddie game” distinction. Some people who are probably in denial have argued with me when I describe Ni No Kuni in those terms, but it’s a cartoon fantasy in which you play a small boy whose main objective is to continue postponing the moment when he has to grow up and stop being such a little pussy, all of which points to kiddie game for me. But then again, it’s entirely possible we are living in backwards world where all the kids are playing Black Ops and Warhammer 40k and only the adult gamers play the nice wholesome power of friendship innocent fairy tale RPGs in a futile effort to cling to their fading youth. Perhaps we should follow this logic to its conclusion – all the children can run the world and the adults can all go play on the swings. It’s not like the kids could make the global economy much worse after they blow it all on Mars bars.