For as long as humans have been telling stories, the concept of competing against Death to win back a soul has been a popular one. Each retelling puts a new spin on the concept: Orpheus must lead Eurydice out of the underworld without looking back but falters at the last moment, unable to trust Hades’ word. Bill and Ted defeat Death at the likes of Battleship and Twister, games too modern for the specter to comprehend. Few contests, however, have been quite as strange as the competition at the heart of Nightmare Fishing Tournament 2020. Competing with other lost souls to catch the largest demonic fish possible, the skinless protagonist must use all their skills — from carefully studying their prey to frantically stabbing a shark in the face — to win the grand prize.

Nightmare Fishing Tournament 2020 is a quirky blend of chilled out, slow-paced fishing with the kind of boss battle you would expect in Shadow of the Colossus. The free game plays out in rounds, with all the undead participants looking for the largest example of a particular fish. Each aquatic monstrosity has its own likes and dislikes, swimming at different depths and having strong preferences for types of bait. The camera dips below the water along with the hook, allowing the player to get a feel for where their quarry lurks.

Once a beast is hooked, however, the player must dive off the side of the boat and fight the fish one on one. Demonic fish are far too strong to be simply reeled in, so the protagonist must grab onto its back and stab repeatedly before the fish can be pulled up. The player is at a severe disadvantage in these sections, having to keep track of how much air they have left, the grip on the fish, and the strength remaining on the line. This challenging approach is far more exciting than a standard fishing game, which generally degrades to button mashing or filling meters to reel in a catch. Once the quarry is exhausted, the protagonist must swiftly swim back to the boat and reel the fish in before it regains its strength.

Catching a fish is challenging, but each victorious battle is richly rewarded. Death has a side business in a bait and tackle shop, and bringing in a fish earns plenty of currency to spend on upgrading the player’s statistics and equipment. Aside from plain cash, valuable scales are also chipped off a fish during the struggle, so even an unsuccessful battle can help the player progress.

Generally, cash upgrades physical items, such as improving the knife, boat motor, or unlocking a spear gun, whereas scales improve things like how long the protagonist can hold their breath and how much damage is taken from a shark bite. Taking the time to collect a variety of scales is vital for succeeding in the later parts of the game, where the fish bite hard and lurk far beyond a basic fishing rod’s reach.

When everything works properly, Nightmare Fishing Tournament 2020 is a dream to play, a perfect balance between calmly gliding across the water and desperately swimming away from snapping jaws. Each of the fish fights completely differently, a new boss strategy to learn every round. Unfortunately, I ran into technical issues repeatedly during my play though, to the point where I had to hard-reset my computer.

Nightmare Fishing Tournament 2020 comes in two versions: one with gamepad controls and one using mouse and keyboard. The gamepad version suffers from the forever spinning camera bug, and it disables the keyboard completely so I could not close the program. The keyboard version is generally usable, but the controls are poorly explained and do not always work. I never figured out how to use my spear gun. When a fish is hooked on the line, the natural instinct is to jump straight into the water, but the F key needs to be pressed first to let go of the rod. Press F too quickly, however, and the game will bug out, leaving the protagonist unable to move. A reset generally fixes this problem, but others would pop up, including one version where no fish spawned at all. The technical issues are a real shame, as Nightmare Fishing Tournament 2020 is tremendous fun when everything runs smoothly. 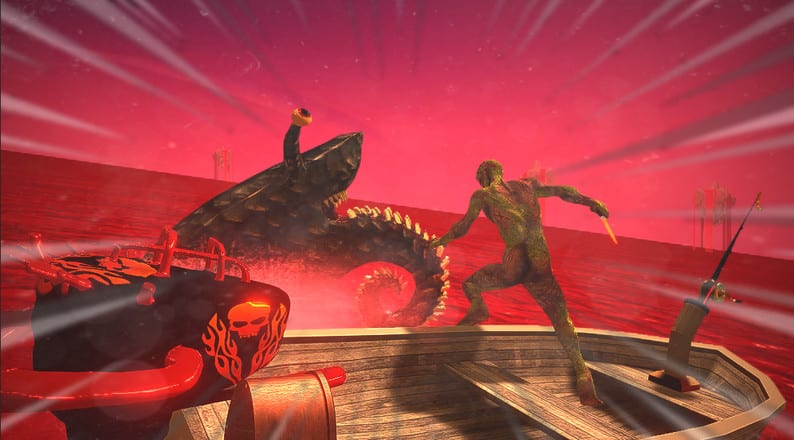 An inadvertent bonus of the game bugging out is the discovery of the in-game radio, which I found when pressing every key on the keyboard. This amazing playlist of jaunty angry whaler songs adds so much to the atmosphere of the game, and the host DJ Shrieks is extremely charming. The world has a great sense of place, with the toothy aquatic beasts clearly a creation of hell. The skinless protagonist gets moldy as the game progresses — a lovely little detail considering how much swimming is involved. I would have liked subtitles for Death and the other denizens of the underworld as they can be a little hard to hear, especially with the radio blaring. An in-game screen with the controls would also be helpful, as most aspects of gameplay are only mentioned once.

Nightmare Fishing Tournament 2020 still has some polishing to do, but the game is a joy to play when at its best. Stabbing a flying stingray as it spirals through the air is an experience I cannot get anywhere else, and I absolutely adore the personality of the game’s music and world.

Next week we will be playing Liquidators, a 3D exploration game based on the Chernobyl nuclear disaster. The game can be downloaded from Steam. If you would like to share your thoughts, discussions will be happening in the Discord server.