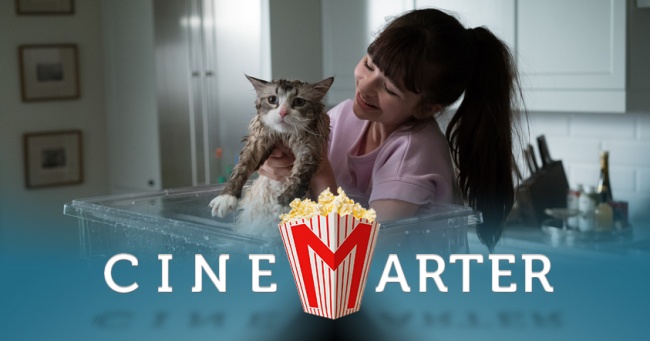 Nine Lives is what you get when you mix together Click, the 2006 remake of The Shaggy Dog, and cat memes you found one night while browsing I Can Has Cheeseburger. It stars someone far too talented to deal with this garbage, puts him inside the body of a cat, and teaches him to love his family – or else be stuck as a cat for the rest of his life. It’s well-meaning but ultimately thoroughly unenjoyable and unbelievably stupid. I’ve long been a proponent of the idea that no movie is made worse by the presence of a cat, but if Nine Lives killed off its cat protagonist, like he often wishes, the movie might have been better.

Our lead is Kevin Spacey, who plays a Trump-like businessman named Tom Brand. He spends too much time at his job and with building the largest tower in all of the Northern Hemisphere, because nothing says overcompensating like erecting a giant phallic stick in the ground. He doesn’t spend much time with his wife (Jennifer Garner) or daughter (Malina Weissman), and it’s the latter’s birthday. She wants a cat. He buys a cat but, shortly thereafter, a freak accident puts his human body in a coma and his mind inside the body of the cat, whom the film names “Mr. Fuzzypants.” 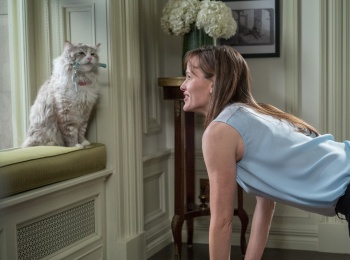 The cat was sold to him by a character played by Christopher Walken, who uses magic to perform the transfer and is the only one who can understand Brand in cat form. Presumably, he’s playing the same character who sold Adam Sandler a magical remote in Click – and many of the same lessons get taught in this one. I hope it’s the same character, anyway, as it makes the whole movie slightly more interesting (but only slightly).

Essentially, we follow Spacey-as-a-cat as he hates life, then hates life less, then starts to learn the value of family, and then tries to save his business, which one of his employees (Mark Consuelos) is trying to ruin … by making it publicly traded and earning him “billions” of dollars. A significant portion of the movie is spent in boardrooms talking about this company, which will bore its target audience of 6-year-olds. The cat parts will irritate adults. It’s a lose-lose for everyone.

Then again, this is a film that doesn’t seem to understand what audience it’s going for in the first place. It’s ostensibly a children’s movie, but then it does stuff like having the cat get drunk and be called an alcoholic, as well as teasing both adultery and suicide. Mixed in between those types of scenes are visuals of the cat urinating on a rug. For laughs. Because we haven’t evolved from bodily function jokes.

Nine Lives is a children’s movie that teases alcoholism, adultery, and suicide.

The cat they got to play Mr. Fuzzpants is well-trained. In fact, when the movie ends, the first people credited are animal trainers. One of the other early credits is given to some of the VFX people, which also makes sense as many of the cat’s antics were generated with computers. And you can tell. Whenever the cat starts to move very much unlike a cat does, it’s immediately noticeable. To whatever extent you managed to become immersed in the film, you’re immediately taken out because of this.

Barry Sonnenfeld directed Nine Lives. If you know that name, it’s likely from the three Men in Black movies or the first two Adams Family movies. He’s done other things, but not a lot and none of them as memorable. One can only assume this was a paycheck film and nothing more, since there’s nothing here that showcases talent or enthusiasm. Ditto that for Kevin Spacey, who comes across as bored and uninterested. Jennifer Garner at least seems to try, but isn’t good enough to anything with a nothing of a character. Malina Weissman is a bad kid actor, although not as bad as Talitha Bateman, who shows up for a few scenes as her forced-friend. Robbie Amell plays Spacey’s son from a previous marriage, also doing relatively little of value on-screen. Christopher Walken appears to be having fun, but in only a few scenes, most of which see him starring opposite a cat, there’s only so much one can do.

Nine Lives is a children’s movie that teases alcoholism, adultery, and suicide. It’s a terrible mixture of The Shaggy Dog, Click, and internet cat memes. It features bored or bad actors doing the bare minimum to procure a paycheck. It has no humor. In fairness, it does have a good message, but it’s one that’s so overdone that its impact is very limited – and it’s delivered by the aforementioned bored actors. If it wasn’t for a well-trained cat, it would be without value.

Recommendation: Vote with your wallet and don’t go see this paycheck movie.