BioShock Infinite‘s ending has proved to be kinda polarizing. I’ve heard some people call it the worst ending ever, but that’s just being a big hyperbolic tosspot pretending to have edgy opinions. You don’t even have to look beyond the same bloody series to find a worse ending. I still stand by my totally non-hyperbolic opinion that BioShock 1 has the best intro ever, and the story keeps up a high standard for most of the way through. If it had ended about an hour or two earlier in a way that didn’t suck big fat seaslugs it would’ve been near perfect, and Infinite would’ve been something of a come-down.

As it stands, the two run about equal. Love or hate Infinite‘s ending, it’s certainly unconventional, and interesting enough to stick in my mind and give me something to think about. At least it provokes discussion, which is more than most of triple-A gaming’s bland storytelling can do. I’ve started to wonder if you could consider Infinite, BioShock 1 and System Shock 2 as a sort of unconventional trilogy, all hitting basically the same points to explore different themes and environments. An oblivious man with a significant history arrives in a large residential environment in an unconventional location and must piece together a backstory involving a discovery that corrupted the people. Is there anything in System Shock 2‘s intro that could be considered a lighthouse analogue? Maybe your shining military career before arriving on the VON BRAUN, but let’s not read too much into these things.

For starters, the “vigors”, which are functionally plasmids. In BioShock, the plasmids were tied into the whole situation with a neat red ribbon. Andrew Ryan set up a city based around objectivism and self-interest, people found a way to improve their selves with gene splicing, they started fighting over the materials required to do so, then mutations, madness, and collapse. The vigors in Columbia are not there for any reason. Yes, I know, they were brought in from an alternate reality, but that’s just an explanation for their presence, not a reason for them to be there.

Their only service to the plot is to jab holes in it. Why doesn’t anyone else in Columbia seem to be using them to the degree Booker does? And why don’t the vigors have the same negative side effects as the plasmids, all the physical mutation and madness? Fifty years beforehand? Should Andrew Ryan have fired his R&D department? I guess they got them from the alternate reality where the problems had been ironed out. But the more you fall back on that particular handwave, the more it raises the issue of why alternate realities aren’t being used to solve every problem. Why hasn’t Comstock just gone to the alternate reality where his plans already succeeded and he now lives with Jesus on the moon? 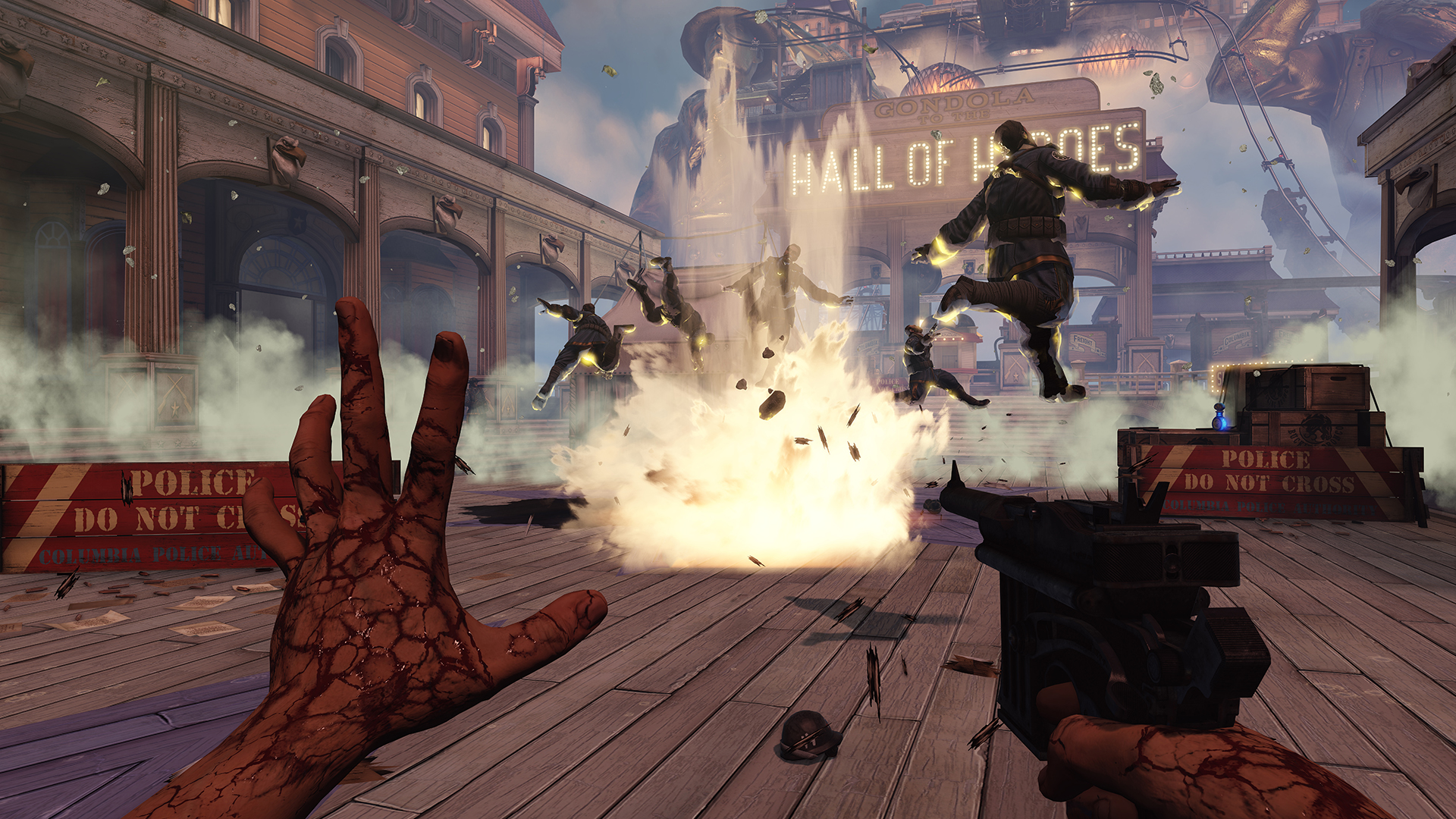 Secondly, it was not necessary for Infinite to be as violent as it is. It’s not the killing I object to; the enemies are all pretty decisively portrayed as mad cultists, and killing them is on the same level as Indiana Jones shooting all the dastardly Nazis or James Bond kicking an evil henchman off a walkway. My point is, the most Indiana Jones did was wince uncomfortably when a big Nazi got minced off-camera by a propeller. He never rammed a spinning chain-hook device into the poor bastard’s throat and watched the blood all squirt out in slow motion.

The major way in which Infinite differs from its predecessors is that it’s not, by any stretch of the imagination, a horror game. In contrast to the grim silent corridors of the VON BRAUN, or the drippy, decayed opulence of Rapture, Columbia’s environments are bright, clean, colorful and airy. The action, especially when the skyline travelling gets involved, is fast-paced and exciting. It’s very overtly a swashbuckling adventure, in the sliding down a pirate ship’s sails with a dagger between your teeth style. And while a horror game can use gory violence for creating the necessary tone, in Infinite‘s setting it becomes a bit of a stumbling block. I’ll agree that the story does handle some pretty fucked up themes, but there are ways to portray violent radicals as such without having them nail bloody scalps to a wall.

The other reason why horror sits uncomfortably in Infinite is that the essence of horror is in horrible things happening to realistic people, and the enemies in Infinite are absolute cartoons. You could argue that the same is true of BioShock‘s splicers, who spoke like stereotypical 50’s housewives and 20’s flappers, but it was established that these were once sensible people who came to a theoretically sound ideal society and have since mutated themselves and gone mad. Meanwhile, Infinite‘s enemies are just a mad cult of unapologetically racist kooks who want to blow up the world for being full of sinners. And it’s just not as interesting as the Rapture scenario. It’s too easy. It’s a Saturday morning cartoon motive.

I have a friend who’s convinced that American conservatives are going to denounce Infinite as a liberal smear upon the Republican south. Personally, I don’t think they would, because of what is known in libel law as the “small penis defense”. I wouldn’t think that any group is going to say “Hey! You know these complete nutters who gleefully enslave the poor and stone interracial couples to death as a fun carnival game? I think they’re supposed to represent us!”

So the degree of inherent shitheadness in Columbia’s population was the other thing that I felt could’ve been toned down. I do see that the plot did call for Comstock to be an irredeemable monster, because by the end the main characters are taking really self-destructive courses of action for the sole reason that it will put down Comstock. It’s when you start building cathedrals to John Wilkes Booth that things start getting silly.