Usually, the underworld is a perfect stomping ground in videogames, chock full of slavering hordes and demonic overseers, ultimately ruled by a goat-horned monstrosity who sounds suspiciously like Tim Curry. It’s got everything you could possibly want: bad guys, good loot, and a tasteful skull décor. All this makes a game like LucasArts’s Grim Fandango unusual. It imagines an underworld without such diabolical fixtures – no hellfire, no eternal torment. Instead, the afterlife looks like Thursday afternoon.

In Grim Fandango‘s skeletal Land of the Dead, it’s business as usual for the dearly departed. Inspired by the Aztec nether-realm of Mictlan, the Land of the Dead is a passing place for people on their way to their final destination – but these days, people pass in style. The virtuous are whisked away by rail de luxe, arriving within minutes. The worst of us losers have to schlep across limbo one step at a time, over the course of several years – and you thought the wait at the pearly gates was bad. A select few stick around, living much as they did in life … at least, if you call that living, which I suppose you shouldn’t. The game follows Manny Calavera, who is stuck in the dead end town of El Marrow due to some terrible misdeeds in a former life. He passes his time as a working stiff at the Department of Death, peddling “travel packages” to the recently deceased on their way to the other side. But Manny always seems to get the short end of the scythe, tending to deadbeats while the “good” customers get snapped up. At one point, after sending off a series of skinflinted customers, he laments his fate: “I need a saint. I need a lead on a rich, dead saint.”

Enter Mercedes “Meche” Colomar, a sweet and demure woman who lived a life of compassion – her shortened time on earth was filled with poverty and volunteer work. Plus, she loves puppies, which should count for something. Meche aces the post-death examination, but for some reason is denied a ticket on the express train to the afterlife. Instead, she departs on foot, unprotected and alone. It’s at this point that Manny realizes that something very big is going down in the Land of the Dead – first class tickets to the next realm are ending up in the wrong hands. The whole system is rife with corruption and collusion. What do you call an afterlife where bad things still happen to good people?

It’s in this ambiguity that Grim Fandango stands apart. In nearly every videogame ever made, there is a way that you can “die,” but not really. Big ideas like life and death are all part of a universal gamers’ code, drummed into us since we were little, that goes something like this: “There is good, and there is bad. There are rules to follow – do it wrong, and it’s Game Over. Do everything right, and you’ll be rewarded. Do really well, and you’ll get a High Score, and your name will be remembered forever!” Within the very rubric of traditional gaming there is a whiff of brimstone, and a logic that verges upon the theological. From this perspective, Grim Fandango‘s Land of the Dead pushes this central metaphor of gaming into sharp relief, by presenting an alternative outside this scheme of punishment and reward. Instead, good and bad are roughly equal, and the rules that we labor so hard to follow don’t amount to a hill of beans in this crazy world. Instead, we get a game that starts at Game Over, and goes from there.

It’s in pursuit of some sense of order that Grim Fandango plays out – a quest that drags Manny across the Land of the Dead for four years, moving from petrified wilderness to a bustling metropolis to an island retreat, arriving finally at the gleaming white deserts that stretch to the end of the underworld. Along the way, he encounters a motley cast of characters, ranging from a speed freak demon, a frigid secretary, a dashing Latin revolutionary, and a bunch of beatniks. They all, in their own ways, have dead ended that game called life, and now struggle to sort out the aftermath. The moment after death is often thought of as the moment of big reveal – a chance, finally, to get the straight dish on life, the universe, and everything. How unusually cruel, then, to leave these folks wondering just what the hell is going on. 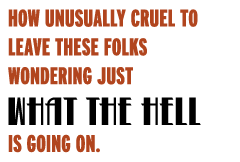 Because Grim Fandango is a game that follows a very different model of life and death, it provides a thoughtful example of what happens when conventional ideas of “good” and “bad” are blurred. It’s true that the Land of the Dead is not a place of torment, and there are no monstrous beings hellbent on spreading torment and misery. But there’s also no purpose or sense of justice, and no order save soulless bureaucracy. With no rules to live by, and no one in charge, the second lives led by the denizens of this underworld may seem just as meaningless and meandering as the first. Similarly, in most videogames, it is usually simple to separate the good from the bad – say, between the good mushrooms that power you up and the bad mushroom that kill you. But in Grim Fandango, as a noir-flavored adventure game, the good can rub elbows with the rotten, and it’s every soul for himself. Accordingly, the game’s many villains – a bloated, wheezing businessman, a slimeball salesman, a femme fatale with questionable taste in boyfriends – aren’t gargantuan pillars of Pure Eebil, but just crooked folks on the take. In the absence of any sort of metaphysical justice, they’ve turned life eternal into the longest con. They’ve even perfected a way to cheat death in the other direction: by shooting an unwanted target full of fast sprouting plantlife so that their skeletal frame is torn apart by a great tangle of flowers, “killing” them a second time over. There’s dead, and then there’s pushing daisies.

This loosening of rules works both ways, so even conventional baddies seem to be soul-sick. In Grim Fandango, the demons that populate the Land of the Dead are not fiery whipcrackers, but rather elemental spirits called into being to drudge away at Joe jobs – one claims he was created with a singular, burning desire to run the office elevators, which is a shame since they just got automated last year. Even the wicked seem like spare parts inside a failing and disimpassioned system: Near the end of the game, when most of the conspirators have been sprouted, shredded to bits or cast into fiery pits, it is revealed that the main desire behind the golden-ticket plot is not to rake in the big bucks for a few greedy souls, but to give them one desperate last shot at redemption. One particularly tainted mobster has amassed an entire suitcase full of these scrips, perhaps hoping that at the Gates at the End of the World, they will buy saints by the bulk. It sounds desperate, and it is bound to fail. Even in the next life, it seems, you can’t take it with you. But the whole scheme does make a certain type of sense, especially in a videogame – at this point, we are all experts at collecting coins towards an extra life.

Normally, according to the rules of noir, this is all fair game. If every sinner is flawed in The Land of the Dead, then they deserve whatever lot they can shake out. But throw in a true innocent, and everything changes. Meche is that rarest type of spirit, combining a pure heart, a quick wit, and gams up to there. No matter how rotten the system, no matter how fixed the game, it seems a shame to leave her wandering in the wilderness. In this, Grim Fandango shares not only the tone of noir, but also its cynical, yet surprisingly humanistic ethic – that there exists no moral compass in this world save what we bring with us. This may mean something far different from person to person, but it suffices for a code of ethics in a game where the sinners live alongside the saints. And it’s precisely because of this that Manny Calavera falls somewhere in between. In the final scene, a cigar-chomping bigwig calls him out for his cynicism, asking, “What happened to you, that caused you to lose your sense of hope, your sense of life?” Manny’s answer is short and sweet, with the brevity of a tombstone: “I died.”

Not a bad answer. It’s good to hear that eternal rest hasn’t ruined his sense of timing. But this darkly comic moralizing reminds me of another hardboiled meditation, written by Raymond Chandler around 60 years prior:

“What did it matter where you lay once you were dead? In a dirty sump or in a marble tower on top of a high hill? You were dead, you were sleeping the big sleep, you were not bothered by things like that. Oil and water were the same as wind and air to you. You just slept the big sleep, not caring about the nastiness of how you died or where you fell.”

Entombed in a mausoleum or rotting out in a swamp, dead is dead, and the messy business of life is for the rest of us. Manny and Meche, wide awake through their big sleep, at least have a chance to decide for themselves how they will spend their last few days in this limbo. How unfamiliar, to play a game that doesn’t have all the answers, and does not even promise the safety and sanctuary of a “happy end.” What matters, rather, is whatever fun you had along the way. In Manny’s words, “Nobody knows what’s going to happen at the other end of the line, so you might as well enjoy the trip.” In removing itself from the black-and-white thinking that shapes much of gamedom, Grim Fandango also invites us to rethink about what we know about the big questions. From the Land of the Dead comes a game about life. It gives us an underworld without angels or demons – all we have, instead, is each other.

Brendan Main hails from the frosty reaches of Canada, so he knows a little something about “gleaming white deserts that stretch to the end of the world.”