I hope everybody had a tolerable observation of the seasonal festivities. While you’re quaffing egg nog and discovering that Grandma forgot to buy a SIM card for your new PSP and the shops won’t open for another two weeks, make sure you never forget the true meaning of Christmas. A hodge-podge of pagan midwinter festivals and traditions with a half-arsed connection to Christ tacked on by the Emperor Constantine so it would be easier to convert the rest of the Roman Empire to Christianity. Where do you think that whole Christmas tree thing came from, religious nuts? Not too many evergreens in Jerusalem.

Anyway, rest assured my end-of-year video for 2011 will be up soon and we can finally draw a line under the traumas of that horrible year. And with my slightly tardy review of Serious Sam 3 last week I personally can draw a line under my outstanding issues, including the seemingly interminable Shooter Season 2011. Now it’s over and half the big properties in the mainstream games industry have shat out the third instalments of their planned trilogies. And hoo-bloody-ray, say I. So rarely do we see so many trilogies get tied off all in one go, and that means the coming years will bring an absolute pile of new intellectual properties. In theory, anyway. This is where you’ll notice the manic edge to my fixed grin implying that I’m determined to be at least a little bit optimistic if only to lessen the likelihood of spontaneous suicide when they announce the Gears of War prequel trilogy.

Take this for the golden opportunity it is, game developers. Let’s see some real creativity from you to justify the huge amounts of money Square Enix or whoever are funneling your way. In fact, before you get too into whatever project you’ve got going, I’ve got a little challenge for you: make a game that’s gratifying without using any violence at all.

You remember my context-challenge-gratification triangle theory of game design, right? Well, it was while playing Serious Sam 3 that I realized that there’re so few games that create a sense of gratification without some degree of visceral schadenfreude. And I think it’s an image problem games would be well advised to rid itself of that they’re all about gleaning entertainment from the misery of others. Usually by watching them explode into dog food. Even something like Spider-Man 2 with its gratifying swinging physics also features the ability to swing bad guys around your head and hurl them into brick walls at skull-bursting velocity.

Don’t get me wrong, violence is fun as hell, but I wonder if one could create the same kind of amusement that doesn’t involve the torment of another living creature. Such a game would be a useful draw card to have the next time you get caught up in a “corrupting the children” debate.

This is all leading up to another opportunity for me to write down another hypothetical game idea that I currently don’t intend to make myself. This is one that’s been knocking around my head since I played Serious Sam 3 and, consequently, Serious Sam Double D, the 2D one. This idea is one I like to call Puppies Hugging Things: The Game. 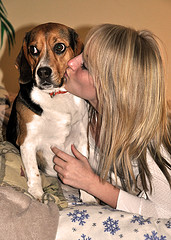 Here’s the concept: You are a van driver who gets involved in a hideous collision, and both you and your van die and descend into Hell, as is the deserved fate of all van drivers. But unbeknownst to the afterlife, there was a basket of puppies in the back of your van that have now accidentally been condemned to Hell alongside you. Puppies aren’t supposed to be condemned to Hell, partly because animals can’t be morally judged by human standards and partly because you can now use them to pacify the many demons that mean you harm. Instead of killing them, you throw a puppy at them, which hugs them until they are calmed down by the first sensation of genuine warmth and sympathy they’ve ever experienced. Think along the lines of the Badly Drawn Boy video for “Year of the Rat”.

So this is superficially a 2D platformer and you have four puppies. You always throw the first one you picked up while the other three cling to the back of your jacket in an adorable stack, moving to your hand one by one with each fling. The four puppies are named Scamp, Puddles, Jethro and Biscuit. As well as being different breeds with different appearances and temperaments, the four also have different stats that make them all better flung in some situations than in others. Scamp is the leader, a good all-rounder mongrel with a patch on one eye. Puddles is the lightest of the puppies and can be hurled higher and further to hit winged or out-of-reach demons. Biscuit, conversely, is the fattest, so cannot be thrown as far, but his extra weight allows him to slow and deflect charging enemies. Jethro is of average weight but is also the most tenacious of the puppies, and will be able to hug the demons for longer while they desperately shake their tentacles to dislodge him. Demon happiness will gradually tick down after it dislodges a puppy so you’d have to be quick on the draw to get another one on their face.

Maybe as the game goes on the puppies acquire new abilities to give it all a Metroidvania play style. Puddles is obviously incontinent so he can wee all over the dreadful fires of Hades and open up new areas. While Biscuit could use his massive girth to shield the player character from harm. Maybe Jethro acquires a devastating super move in which he stops hugging the monster to yawn, curl up and fall asleep on top of its head. It goes without saying that all the puppies are completely indestructible, either because demon magic is completely powerless against them or they’re too adorably stupid to feel pain.

I think to really make this concept work you’d have to really go out of your way to juxtapose the cuteness of the puppies against the hideousness of the environment. I’m not talking cutesy red imps with pitchforks, I’m talking the most nightmarish concoctions of fevered brains. Dante’s Inferno meets Silent Hill with a touch of Binding of Isaac. I want there to be massive boss fights where you must throw puppies at the designated cuddle zones of gigantic hideous mounds of body parts oozing black phlegm from a hundred gnashing vagina-mouths. Because the lesson of Puppies Hugging Things is that the love of a puppy is blind and universal. As long as you’re warm and corporeal, a puppy will turn somersaults with joy the instant you walk in the room.

This just illustrates how dogs are so much better than cats. There is no situation involving a dog in a videogame that would still make sense if it was a cat. If you put in cats instead of rottweilers in Quake the only possible threat they could provide would be batting the player character in the face when they’re trying to sleep.

Mass Effect 2 Prop Rifle Will Blow You Away