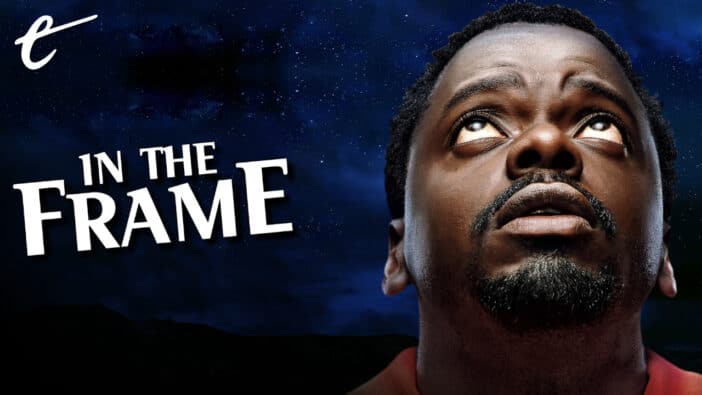 “What’s a bad miracle?” OJ (Daniel Kaluuya) asks his sister Emerald (Keke Palmer) early in Nope. “They got a word for that?” Nope posits that OJ is looking for the word “spectacle.”

Nope is the third feature from writer and director Jordan Peele. It tells the story of OJ and Emerald, who find themselves managing Haywood’s Hollywood Horses ranch following the death of their father Otis (Keith David). Strange events begin to occur around the range, possibly tied to Jupiter’s Claim, a novelty tourist attraction run by former child star Ricky “Jupe” Park (Steven Yeun). OJ and Emerald come to realize that there is an alien entity in the clouds above the ranch. It is hungry.

Although the film has largely been classified as a “horror,” Nope positions itself in direct conversation with filmmaker Steven Spielberg, the father of the American blockbuster. Spielberg’s third film, Close Encounters of the Third Kind, was also about absent fathers and alien visitors. The concept of the movie even echoes Spielberg’s undeveloped pitch for Night Skies, a horror about aliens terrorizing a farm, although Peele claims to have been unaware of the similarities.

There is a cheekiness to the Spielberg homages in Nope. They often feel deliberately skewed and grotesque. In one flashback, a young Ricky (Jacob Kim) witnesses a chimpanzee named Gordy (Terry Notary) brutally attack his co-stars on the set of the sitcom Gordy’s Home. After this horrific incident, Gordy extends a bloody paw towards Ricky as if to suggest a fist bump, recalling the iconic image of a young child reaching out towards an alien from Spielberg’s E.T. the Extra-Terrestrial.

The idea of an alien entity literally feeding off people and livestock evokes the way in which the Tripods feed on their victims in War of the Worlds, right down to the ejection of blood and other waste products. When the entity arrives at the climax of Nope, Angel Torres (Brandon Perea) intones, “It’s here,” in an obvious homage to the line, “They’re here,” from Poltergeist, a movie long subject to (controversial) speculation that it was ghost-directed by Spielberg. 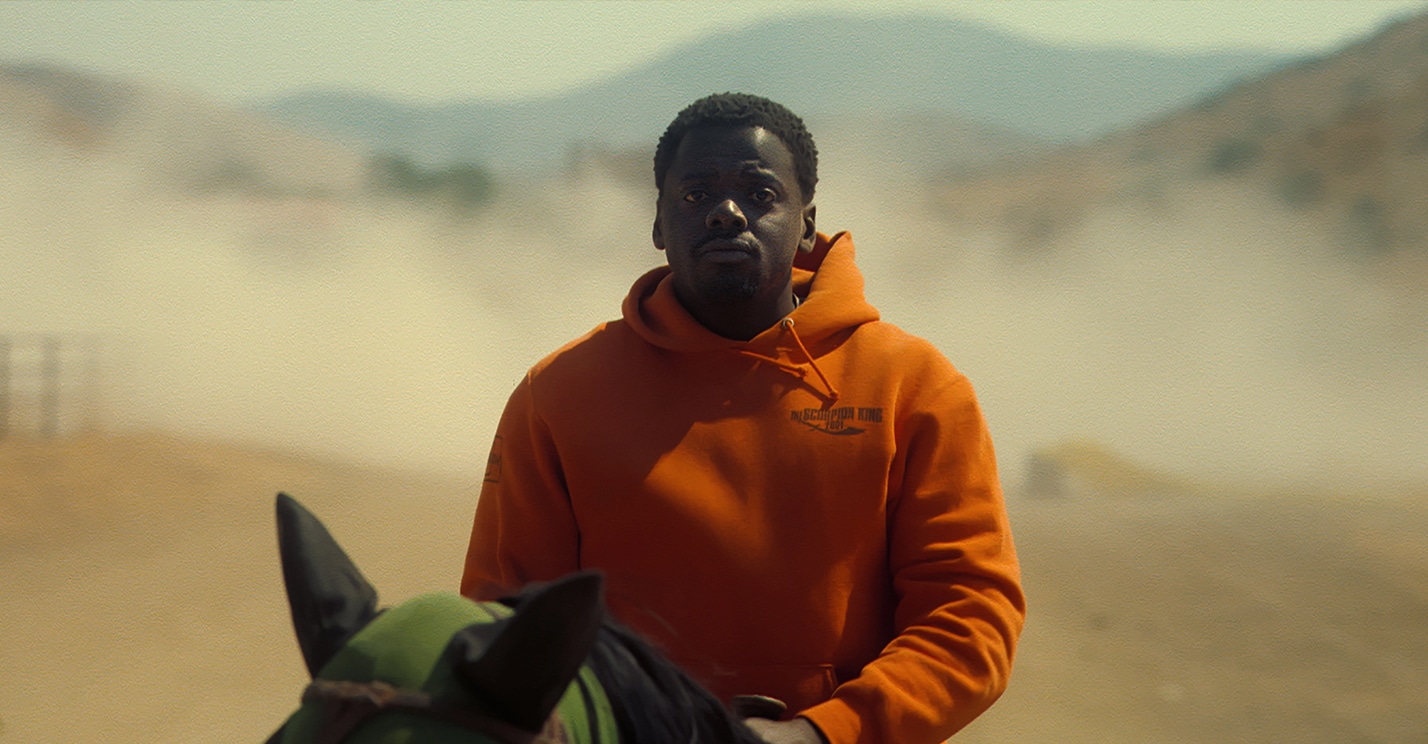 Nope is most striking as an inversion of Jaws. Both are movies about an apex predator lurking in the wild blue yonder. Nope even marks the edge of Jupiter’s Claim as “Out Yonder.” OJ talks about the territorial nature of the alien like Hooper (Richard Dreyfuss) discusses the shark. Grizzled British character actor Michael Wincott provides a counterpart to grizzled British character actor Robert Shaw. Both monsters are defeated when they are tricked into swallowing something explosive.

The biggest difference between the two films is that the shark in Jaws lurks in the ocean, while the monster in Nope flies through the sky. Peele literally takes Spielberg’s breakout movie and flips it upside down. This feels like a statement of purpose for Peele. Jaws was famously the first summer blockbuster and a movie that radically redefined how cinema functioned. It is the cornerstone of modern Hollywood, having reshaped the industry in its own image.

Much like Spielberg himself, Peele seems somewhat anxious about what Jaws has wrought. The monster of Nope is quite literally an all-consuming spectacle, a monster that hoovers up anything that looks at it. The movie opens with a quote from the Book of Nahum, “I will cast abominable filth upon you, make you vile, and make you a spectacle.” Moments before he and his entire audience are eaten, Ricky promises the assembled crowd, “You are going to witness an absolute spectacle.”

There is a cynicism here. Critic Sonny Bunch has argued that Peele is reflecting the audience’s appetites back at them. Nope returns time and again to mirror and camera imagery. OJ and Emerald lose a job when one of their horses is startled by its own reflection. At the climax, a TMZ reporter (Devon Graye) shows up with a reflective helmet and camera to capture the spectacle. The creature’s final form looks like the IMAX camera OJ and Emerald try to use to capture it. 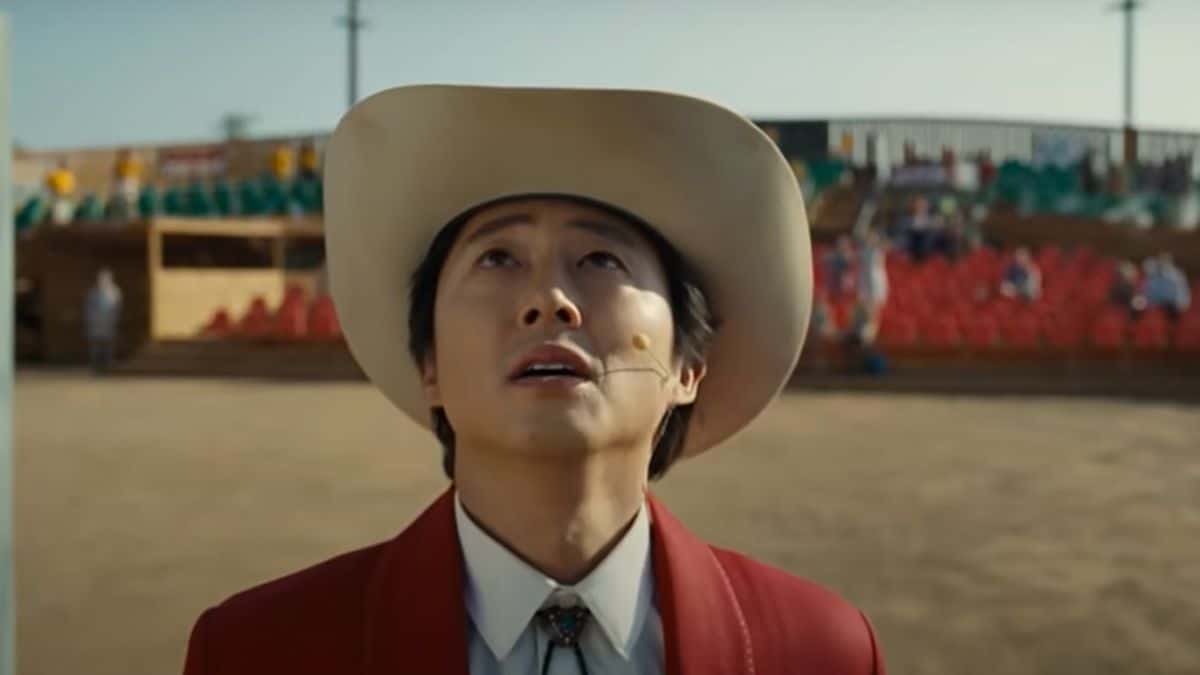 Nope is saturated with eye imagery. Otis is killed when a falling coin penetrates his open eye. Cinematographer Antlers Holst (Wincott) seems to be working on a private project that is largely shots of eyes. OJ deduces quite early on that the creature only attacks those who stare at it. “It’s big, it’s bad, it wants attention,” he states, as if reviewing Jurassic World Dominion. “I don’t think it takes you, if you don’t look at it.” The monster derives power from the audience’s desire to gaze upon it.

Indeed, eyes and mouths are interchangeable in Nope. What initially appears to be the creature’s eye is also revealed to be its gaping maw. The act of looking and consuming are one and the same. The movie’s opening shot is Eadweard Muybridge’s Plate 626, one of the first assemblages of moving pictures starring an anonymous jockey. However the audience sees this staring down what is later revealed to be the creature’s throat. Incidentally, the TMZ reporter is named Ryder Muybridge.

Rather than fleeing the alien monster, or waiting it out, OJ and Emerald become obsessed with capturing it on film. They hope to leverage that footage and save their business, before others arrive to capitalize on the creature. Nope is both sympathetic to this desire and horrified by it. Holst agrees to capture the beast on IMAX, the format on which Nope was released. However, he becomes so obsessed that he allows himself to be consumed in pursuit of the perfect shot.

Discussing the inspiration for Nope, Peele has explained that he was drawn to a story “about our connection to spectacle and money – and our monetization of spectacle.” In particular, Peele was fascinated by how such a culture warps those caught in its gravity. “It’s impossible to work in this industry for very long without scars,” Peele stated, specifically discussing the characterization of Ricky as a former child star still processing the horror he witnessed on the set of Gordy’s Home. 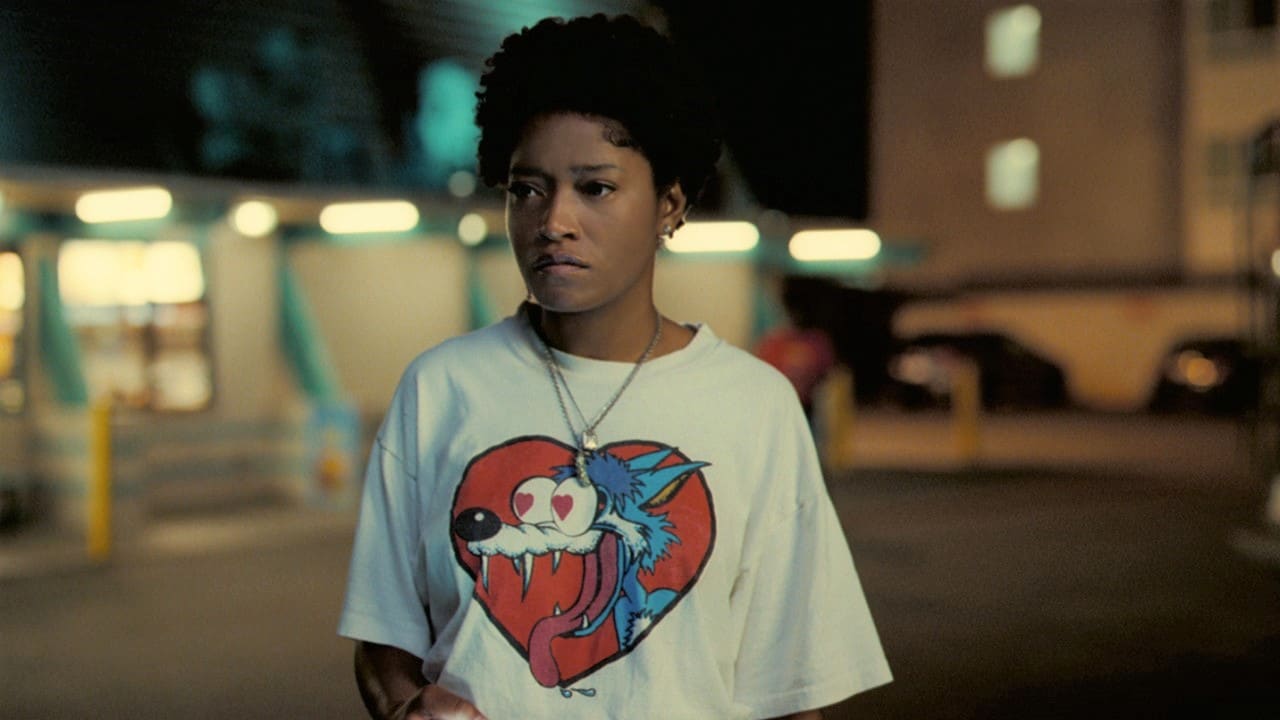 Nope metaphorically portrays the film industry as a wild animal, one that can never be truly tamed. OJ and Emerald’s horse “Lucky” freaks out during the shooting of a television commercial. Holst is working on a nature documentary about savage creatures. OJ understands the monster as a creature that he cannot control, while Ricky tries to turn it into a performer at his theme park with disastrous results, essentially repeating what happened with Gordy on the set of Gordy’s Home.

The rampage on Gordy’s Home directly evokes a host of famous stories about pet chimpanzees attacking people. It is also an image lifted directly from Peele’s own dreams. In terms of makeup and costuming, the film’s presentation of Ricky’s old co-star Mary Jo Elliott (Sophia Coto) after the attack directly evokes how victim Charla Nash famously appeared on The Oprah Winfrey Show. It’s a choice that adds decidedly sinister subtext to Emerald’s pursuit of “the Oprah shot.”

This is a recurring preoccupation for Peele, most overtly in his script for Candyman with Nia DaCosta. Peele is fascinated and horrified by how the industry seeks to capitalize on personal or cultural trauma for financial gain, turning lived experience into facile spectacle. Ricky is stuck replaying the horror on the set of Gordy’s Home. He describes the aliens as “the viewers.” He sells plush dolls with furry bodies like Gordy but with heads like the Panavision cameras that shot the show.

However, Nope extends Peele’s criticism of spectacle, suggesting that it can swallow more than just those who create it and those who are subject to it. It can also affect those who consume it. Angel watches OJ and Emerald on their security feed and gets drawn into their story. He was originally supposed to die at the film’s climax. “This is a society of spectacle,” Peele told NBC News. His choice of words seems deliberate, appearing to allude to French philosopher Guy Debord’s 1967 treatise The Society of the Spectacle, which offered a prescient commentary on the modern world. 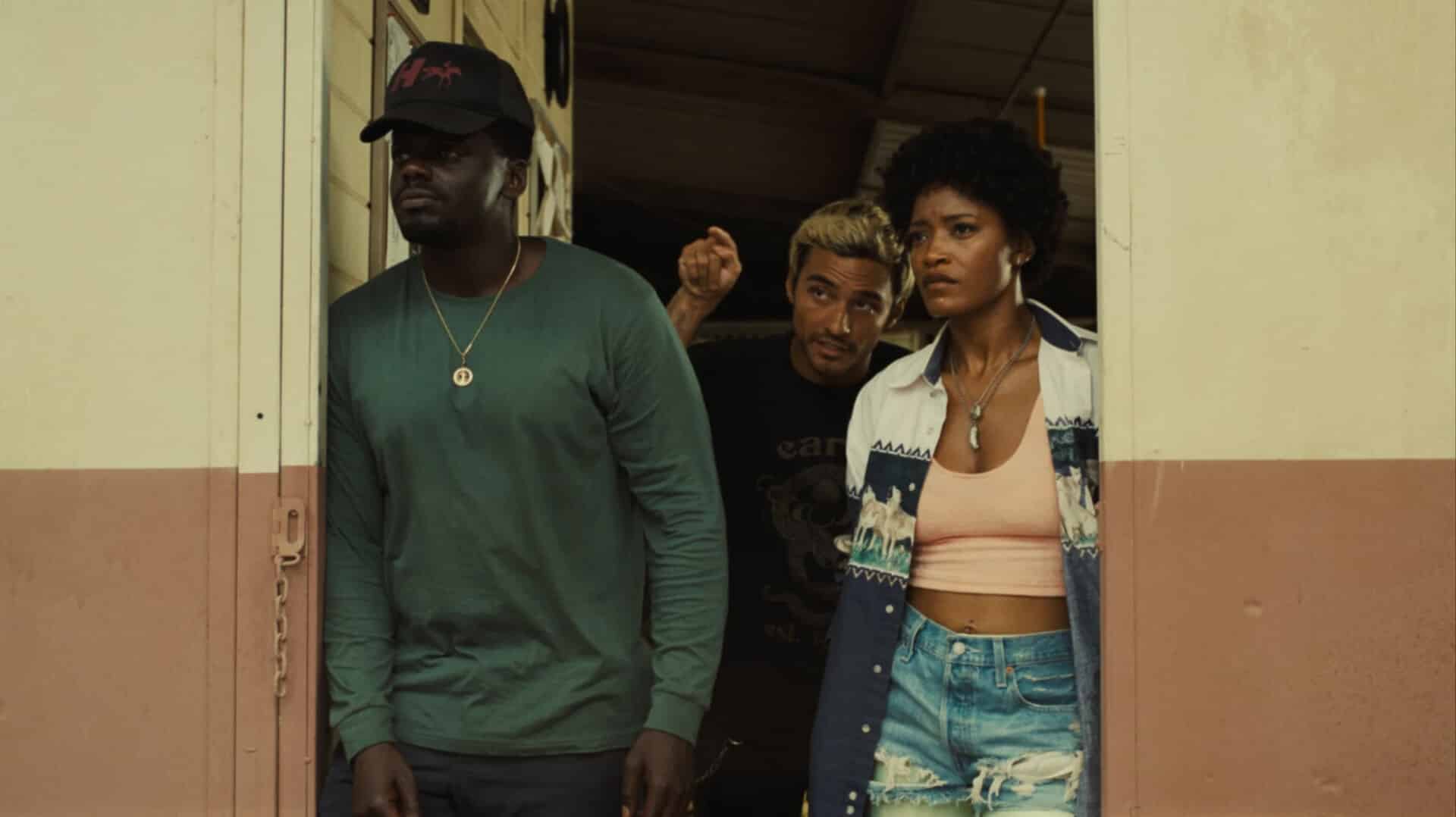 Debord never defines the boundaries of “the spectacle,” and so the concept takes on an abstract and Lovecraftian dimension similar to the creature in Nope. Debord frames his thesis in broad terms, arguing that the spectacle “is the heart of unrealism of the real society.” Debord proposes, “In societies where modern conditions of production prevail, all of life presents itself as an immense accumulation of spectacles. Everything that was directly lived has moved away into representation.”

Spectacle is numbing and monstrous. It consumes everything. The release of Nope overlapped with a lot of news about how the pursuit of spectacle is cannibalizing the film industry. Recently, Batgirl was canceled in part because it was reported “not to have the spectacle that audiences have come to expect from DC fare.” It folds into ongoing conversation about the cost of the exploitation of the VFX artists who render these spectacles: “Mental illness, physical illness, suicide.”

Nope is a fantastic summer blockbuster, the work of a cast and a director at the top of their game. However, the film is built around a central and brutal irony. It is a spectacle about the high price of spectacle and about how everybody pays in their own way.