I have a bit of a hate-hate relationship with Early Access, for the same reason that I refuse to contribute to crowdfunding campaigns – I dislike investing money in a game that may never be complete. Recently, I made an exception when I heard about the indie game that, one day after it’s Early Access release, topped Steam’s top seller list – Northgard. Northgard is an upcoming Norse-themed RTS from Evoland developer Shiro Games, and even though it is still in Early Access with a fraction of the expected features, it shows incredible promise. 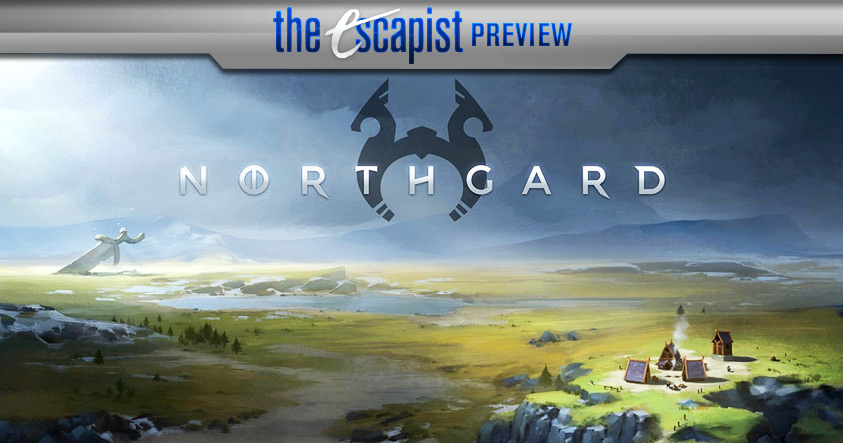 In Northgard‘s current state, players will assume the role of one of three different viking clans – the Clan of the Wolf, the Clan of the Stag, and the Clan of the Goat – that have arrived on a new continent waiting to be explored. At PAX East 2017, the team showcased the fourth clan, which will be entering Early Access soon – the Raven Clan. Each clan has unique starting bonuses and fame bonuses (bonuses that are unlocked as your fame increases), along with unique lore updates. There are four main paths to victory: Domination, which is achieved by destroying the other players’ Town Hall buildings; Fame, which comes from raising your Fame to the “King” title; Trade, which is achieved by collecting a large amount of krowns, having four active merchants, and having 1000 krowns in stock; and Wisdom, which is achieved by receiving blessings from four gods and having four active loremasters. The maps change with every new playthrough, and several maps include special locations that, if you achieve certain tasks, will grant you instant victory.

Each player will begin with a single territory and a Town Hall building that spawns new villagers. By default, villagers will automatically begin collecting food once they join your clan until they are assigned to a different building. At the start of the game there are limited resources available, meaning there are limited buildings that can be placed. A scout is necessary in order to discover new territories that you can claim, while a woodcutter is required in order to produce more wood for day-to-day survival and new houses are integral to growing your clan. Some areas are inhabited by enemies – wolves, monsters, or rival clans – and you’ll need warriors in order to take those areas. Each new area needs to be colonized with food in order to make it part of your territory, and colonizing territories adds to your fame. However, there are limited spaces for placing buildings in each territory. Some areas include forests, which will increase the amount of wood you can harvest, while some feature fish, deer, or fertile land, where you can fish, hunt, or build fields, respectively. At the start, there was plenty of destroying and replacing buildings in order to maximize the amount of resources I could bring in at any given time.

Resource management is a huge factor in survival and success, and the circumstances are constantly changes. Food production decreases in the winter, while wood use increases. However, some winters are harsher than others, draining your resources more quickly, and natural disasters like earthquakes can damage multiple buildings at a time, requiring wood for repairs. Players will want a healthy supply of these items in order to progress. Krowns are also a precious resource, needed for building upkeep and recruiting more warriors, and can be earned by exploring new areas, ruins scattered throughout the map, or through trading resources with another clan. Other resources that are valuable yet slightly less necessary for survival are Iron and Stone. These can be found in deposits across the map, and can be extracted by placing a miner in the area. Both Iron and Stone deposits have limited quantities, and once the deposit is emptied no more can be harvested. Stone is valuable for upgrading buildings, while Iron – the rarer of the two – is a valuable resource for upgrading weapons. You need to do all of this while maintaining your clan’s happiness, which can be done by quickly treating the sick and injured, expanding your territory, and increasing the number of warriors you have.

At the moment, Northgard features a single player option, letting players become familiar with the controls and paths to victory while battling against AI enemies, although campaign and multiplayer options will be arriving at a later date, along with more clans.

There is no variety in the appearance of the buildings from clan to clan, and as much as I enjoyed the game, it did get pretty dull looking at the same buildings over and over. The only variations you’ll see come when upgrading a building – it becomes a darker version of what it was previously – and your Town Halls, where the only difference is the banner with your clan of choice’s logo on it.

Multiplayer is going to be where the game really shines. The single player option allows players to choose which type of victory they’d like to pursue, and each clan has distinct advantages. Unfortunately, the AI you’ll be playing against at this time, even on the hardest difficulty, are pretty dumb. Adjusting to how other players act and the victory paths they are pursuing is something I look forward to, and I can’t wait to see how the game grows in the coming months.