So last week on Puncher Extruation I ran my big fat mouth off saying that there has never been a sequel to a self-contained game story that has been regarded as being better than the original, unless the sequel has completely new characters. Well, a lot of my correspondents took issue with this claim, which, in retrospect, may have been a little hasty. I definitely think it applies to traditional storytelling media like films and novels, but videogame sequels can be a different kettle of fish. More often a videogame sequel comes about from technological or mechanical developments, so the story improves just because the means by which the story is told has improved. Although less often now that the rise of processing power has slowed almost to a halt of late.

Some people mentioned Monkey Island 2, and I’ll give them that one, but I insist this falls under the category of “technologically upgraded sequel” since it took up more disks (I had the Amiga version of both games, and I thought Monkey Island 1 being on four 3.5″ floppies made for pretty obnoxious disk swapping, but then Monkey Island 2 came on twelve of the motherfuckers). Another one was Resident Evil 4, the head-and-shoulders standout best of an otherwise terribly overrated series, and which featured the same protagonist as Resident Evil 2. But the plot as a whole is so utterly tangential to the poor excuse for a canon the rest of the series has that the identity of the main character was almost irrelevant, and I classify this with the “total re-jigger” category. The various latter incarnations of Mario you could also argue fit into my criteria, but no one really plays those games for the story, do they.

And you know what, Castlevania: Symphony of the Night is definitely better than its predecessors. The Castlevania series existed for the longest time in that Mario/Zelda position of churning out essentially the same game with somewhat improved graphics every time someone figured out how to crowbar more pixels onto a cartridge, but Symphony of the Night led the way by eschewing the traditional level-based structure in favour of open-ended exploration platforming. Although future instalments sort of missed the point by ripping off Symphony of the Night instead. To all those people who say that every Mario is the beta for the Mario that comes after it, I would point out Symphony of the Night and ask if it isn’t better to spread out into new ideas than concentrate eternally on spinning the same straw into gold.

I really think SOTN still holds up today. What I admire most is that it resisted temptation. Despite being on the then-spectacular new technology of the Playstation 1 it stuck with being a 2D game while everything else was trying out the brand new polygons. And from an enlightened modern standpoint, absolutely nothing looks worse than PS1-generation polygon graphics, not even photos of dying children. SOTN was happy to stay on the 2D pile with the previous generation and become their leper king, with ridiculous numbers of art assets and detailing. Better to rule in 16-bit than serve in 32, right? I admire that because it’s exactly the same philosophy – of elevating an old but reliable system just by making it look as nice as possible – that makes me like Painkiller so slobberingly much. 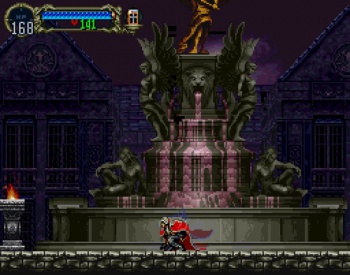 It’s weird to think back to when the PS1 was top of the range technology. These days you can find PCs powerful enough to emulate the PS1 in dumpsters behind school computer labs. It’s hard to think back to a time when SOTN was selling as a full-price mainstream release because literally anyone could make it today. If you used something like Game Maker you could have a similar platform engine together in an afternoon without even having to code that much. Art assets could be found from some free internet resource or through a tutorial or two. Really, the only thing left is to fit it all together and write a story around it.

Which makes me think of Inform 7. This is a text adventure development tool available on the internet that, rather uniquely, went out of its way to attract actual writers rather than programmers. The intention was that the programming language should resemble standard English prose, so you could type something like “Inside the room is a table, and on the table is a ball. The description of the ball is ‘oh look I found a ball'” and that would produce a short text adventure where you can examine a ball. There are still rules you have to keep within but I found it a very easy language to pick up, and I think it’s a great idea, because there are a lot of skilled writers and designers in the world that don’t have the wherewithal to learn the ridiculous level of technical skills to create a game, and that’s what still hobbles video games when compared to other art forms.

Speaking as a novelist, writing a novel is easy. Well, actually it’s probably a lot harder than most people realize, but it’s a lot easier technically speaking than making a game. But what if mainstream gaming took the Inform 7 approach? Create a deep, intuitive toolset designed for non-programmers that can let you create models, textures and game mechanics with dropdowns and a visual mouse-driven interface to as complex a level as the user desires, so that any lone developer, like ones who specialize more in aesthetics or story writing, can create a game that could then be sold in mainstream circles or over Steam to anyone who wants to look for it? Would that not spark the same creative renaissance in gaming that inexpensive digital cameras created in the film industry?

This wouldn’t happen because it’s the nature of the corporate society in which we live that technology is jealously hoarded. But you know what the best game design tool I’ve ever seen is? The Holodeck on Star Trek: The Next Generation. You can see it in a couple of episodes, any johnny on the crew can walk in and say “Computer, generate a nightclub consistent with the style of the Roaring Twenties,” and the computer will randomly create one whose details can then be tweaked on as fine a scale as you like. I would kill for a chance to teleport into the fictional realm and use that shit to create a game. Although knowing Star Trek, my end boss would probably escape somehow and run riot in the cargo bays before one of the regulars comes up with some mystifying technobabble solution that reverses the polarity on the air conditioning in such a way that the monster turns into a tray of puddings. Goodnight, everybody.