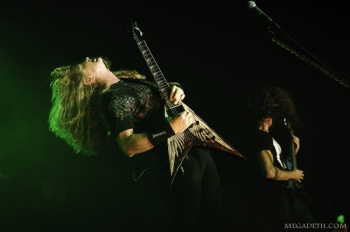 Let’s get the weird stuff out of the way right at the start. The new Guitar Hero: Warriors of Rock, has an actual story, which Gene Simmons narrates as the God of Rock. Rush’s epic 2112, complete with full liner-note narration by the band, is part of the test players have to pass to gain access to the God’s magic guitar and battle against the Beast who imprisoned the God of Rock. Dave Mustaine recorded new songs for the final fight. Also, Axel Steel can now turn into a mummy. In short, the new game should have players swimming in a sea of anticipation and confusion.

Guitar Hero: Warriors of Rock moves away from the shred-tastic tone of previous games in the series in favor of a stronger rock focus, a focus untarnished by the series’ previous concessions to the soft rock world. So, goodbye, Elton John; hello, Megadeth. Familiar characters like Johnny Napalm and Judy Nails return, but this time they’re not just concerned with finding fans and maintaining multipliers. Now each of the series’ rockers takes part in a story-based fantasy quest, complete with super powers, mythic bands and hard-rocking musical challenges that are woven into the context of the story.

The Escapist recently had the chance to see the game firsthand in San Francisco and to talk with Megadeth guitarist and vocalist Dave Mustaine about his contributions. For a musician who has an entire Wikipedia page devoted to his feuds and rivalries, he is a surprisingly friendly and mellow interview subject, able to speak with sincere enthusiasm about being asked to write the final three songs in the game’s story.

“We landed the big kill there,” says Mustaine.

“That was a twenty point buck. We got the last three songs of the whole game. Could you ask for more? Have these guys call up and say, ‘Hey, we want you to do a song and do what you want. Oh yeah, and by the way, have fun.’ What do you mean have fun? Every time we do a song for hire, it’s like having somebody slowly – never mind. That was a painful analogy, so I’m not going to say anything. It was just so fun.”

In creating the solos for the new game, the developers obviously wanted Mustaine to have as much freedom as he wanted, but that didn’t mean he wasn’t interested in learning from the developers how best to adapt his approach to the videogame. “I’m a guitar player,” he explains, “Not a Guitar Hero player.” Perhaps the most surprising and encouraging feedback he got was to do even more of what he was already doing. “It’s a typical balls to the wall Megadeth song and it works but the funniest thing was that when we turned it in, they go, ‘Man, we want more solos on it.’ I was like ‘Really? I can do that.'” 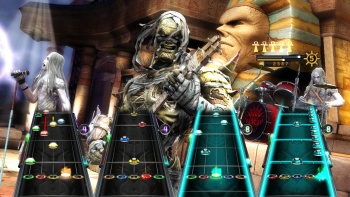 Mustaine also made a point of making his songs for Warriors of Rock a project for the entire band. In fact, this is the first Megadeth track to feature the return of bassist Dave Ellefson, who hadn’t played with the band since it was reformed in 2004. Since he was scheduled to play on the upcoming Rust in Peace tour, Mustaine wanted him to play on these new songs for the game. Ellefson’s efforts, and the influences he drew from early metal favorites like Budgie and Diamond Head, transformed the tracks from “good to great.”

After the track was completed, Mustaine saw how his efforts on the fretboard were translated to the Guitar Hero controller. “There’s so many different frets and notations on the guitar,” he wonders, “how do they make it work?” Mustaine was impressed by the process but quickly reminded us that complete faithfulness isn’t the goal. “I think they make it as challenging … and as fun as it can possibly be.”

Wish-fulfillment has always been a core part of the series’ success. “I think it’s given a lot of people the opportunity,” Mustaine says, “to actually be a part of the music. It’s a bummer to want to be part of a band and to not know how to play an instrument. You just sit there and play air guitar and just think, ‘God, I wish I could make this thing talk.'” As great as the game’s reach has become, and as much as it allows wannabe rockers to live the rock and roll fantasy, it can’t be confused with the real thing. “I remember the feeling I had when I picked up a guitar,” says Mustaine. “If Guitar Hero had been around then, I probably wouldn’t be Dave Mustaine from Megadeth anymore; I’d probably be Dave Mustaine, the guy that shreds on Guitar Hero.”

To combat the series’ oversaturation, Activision is seeking out artists like Mustaine who want to do more than sign a licensing agreement and collect a paycheck. Aerosmith’s Steven Tyler, for instance, has gone so far as to do motion capture sessions of his own face just to make sure his avatar is as faithful as possible. As Guitar Hero invaded the mainstream culture, artists like Eddie Van Halen and Joe Perry have been drawn in by the urging of their kids. Though his own family plays Guitar Hero at home (as well as “that other system…the one with the drumset”), Mustaine says that Megadeth’s involvement didn’t come from his children. “I’m not as old as those guys,” he says with a smile; “I’m young enough to be some of those guys’ kids.”

Mustaine obviously has high hopes for this iteration, but also the future of the franchise. “I’m waiting for them to do a Flying V too,” he says, referring to the style of guitar he’s most associated with. “I’m really excited about seeing what’s next for Guitar Hero,” he adds. “Knowing these guys, they’re probably already diligently working on the next one.”

Look for Guitar Hero: Warriors of Rock on September 24 in Europe, or September 28 in North America.