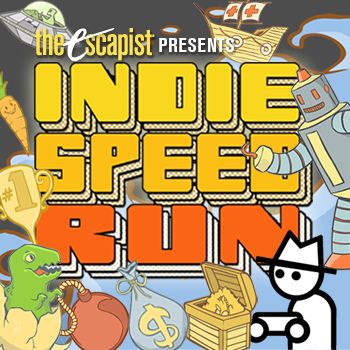 ISR 2012’s last finalist might be its most ambitious game yet.

As the judging period of Indie Speed Run 2012 draws to a close, only one judge-nominated finalist remains. While some of the finalists thus far have been praised for focusing on an attainable concept and executing it well within the short 48-hour development window, Notch’s choice seems to do just the opposite; Dawnseed, by Team Hippomancer was not only created by a single programmer, but includes two full games in one.

“[It’s] an enjoyable little twofer that comments on commenting on games while commenting on games,” Notch said. “Kept me interested the entire way through.” Dawnseed tells the tale of a lone hero set upon a quest to acquire a sacred crystal that holds the lives of entire villages in the balance. Its wonderful Zelda-like playstyle combined with amazing hand-drawn art is only the beginning … but explaining any further would ruin the experience. You can go check it out for yourself for free right here.

While that does it for the seven judge-chosen finalists headed over to Yahtzee, three community winners will be sent alongside of them on January 31st for a shot at the $2,500 grand prize. Taking part in the judging is easy. Just head over to the Free Play area here, and play free games! Than, come back on February 5th to see which game Yahtzee selected as the big winner!