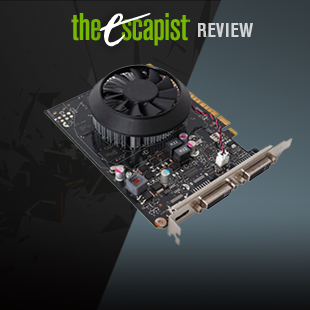 Nvidia and AMD both have plenty of cards available at or above the $250 mark. The GeForce GTX 760, 770, 780, and 780 Ti offer compelling performance at their respective $250, $340, $500, and $700 price points. Meanwhile, the AMD Radeon R9 and R7 lines offer up solid framerates as well, although Nvidia seems to maintain the price-performance advantage at higher prices.

But, as is usually the case with GPU rollouts, both companies are rolling out new models at lower price points. AMD recently announced the $99 R7 250X and $149 R7 265, both of which come in at a price that’s sure to entice PC gamers running two-year-old-plus GPUs. Nvidia isn’t one to be left out in the cold, however, as they have a new entry-level GPU ready to go as well.

The GTX 750 Ti is Nvidia’s $149 card, which means it will likely go toe to toe with the R7 265 in PC gamer’s hearts and minds. The cards do have some differences that will definitely act as differentiators, which we’ll be exploring in this 750 Ti review.

The reference GTX 750 Ti, being a low-price option, is not as dressed up as the 760, 770, and 780. Partners like eVGA, Asus, and the like will release their own spiffier versions, I’m sure (note: actually, they already have! ). This is a card designed with low-budget systems, OEMs, and Steam Box/HTPCs in mind. The board is short (5.7 inches long), and since the 750 Ti has a TDP of 60W, there’s no need for a 6-pin power connector. If you’re building a small system — say with a mini-ITX or micro-ATX motherboard, and a 300W power supply — to use with your TV, the 750 Ti is designed with those scenarios in mind.

Because the card is small and low-power, the cooler design is pretty standard fare. The entire heatsink and fan assembly is smaller than the stock cooler that comes with Intel CPUs. The small size does have one drawback, however, as the HDMI port on the 750 Ti is Mini HDMI, not a full-size port. Mini HDMI is accompanied by two standard DVI ports, however, so connecting the 750 Ti to your existing display should be a snap (or at most, require you to purchase a Mini HDMI to HDMI cable). 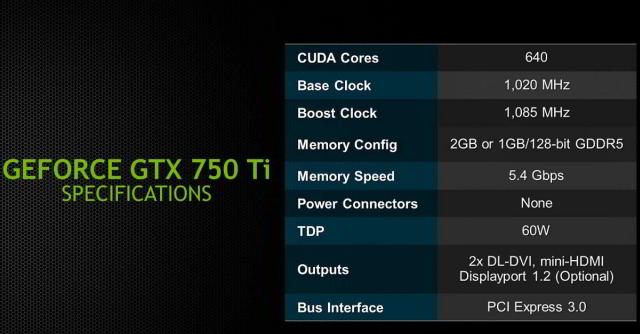 Based on a new 28 nm chip architecture, called Maxwell. Nvidia says the GTX 750 Ti is twice as efficient as Kepler (the chip arc. in the rest of the 700 series), which is why the version in the 750 Ti doesn’t need a 6- or 8-pin power connector. Efficiency doesn’t mean the 750 Ti a slouch, however, as Nvidia claims the card is twice as fast as another popular low-power option: The GTX 550 Ti.

Along with its bigger brothers, the GTX 750 Ti supports all of Nvidia’s more recent software efforts, including GeForce Experience, ShadowPlay, Shield Game Streaming, and the GameWorks suite of enhancements.

Features and design aside, how does the GTX 750 Ti handle gaming? There’s no question that the GTX 760 is a faster card, but we’re comparing the numbers just to give you an idea of how a $150 card stacks up to something $100 more expensive.

The 750 Ti puts up respectable numbers at high settings, including 34 fps-plus in the always demanding Crysis 3. Dropping settings down to Medium presets in most games should bear 60 fps fruit, too, making the 750 Ti a solid $150 offering.

Conclusion
The GTX 750 Ti is definitely money well spent at $149, but there are a few nitpicks to consider. For starters, the 750 Ti cannot be used in an SLI setup, so any desire to use two 750 Ti cards together is immediately dashed. The compromise, then, is that the 750 Ti is such a low-power card, operating with a 60W TDP. If you’re trying to build the smallest possible PC with discrete graphics, the 750 Ti is an admirable choice.

But now we have to look to the competition, specifically AMD’s R7 265. Assuming the $149 price point holds for the R7 265, this newest Radeon offering should offer better gaming performance — a 13 percent boost on average — at the same MSRP. The R7 265 does require a 6-pin power connector, however, which might scare off certain HTPC builders.

The bottom line: The GTX 750 Ti and its Maxwell architecture represents the future of Nvidia cards. While it’s not the fastest card at $150, its efficiency and incredibly low power requirements are very hard to ignore.

Recommendation: If you’re looking to build an HTPC or a low-power Steam Box, the GTX 750 Ti is worth consideration, without a doubt. It’s also worth a look for anyone running an older mid-range GeForce 400 or 500 series GPU.