This article contains spoilers for the Obi-Wan Kenobi finale, “Part VI,” on Disney+.

Immediately following the release of the final episode of Obi-Wan Kenobi, four words trended on social media: “HE SAID THE THING.” This feels like a fitting encapsulation of not just Obi-Wan Kenobi, but so much of modern pop culture.

Obi-Wan Kenobi started with a reasonable amount of promise. An introspective premiere suggested that the miniseries might offer a character-driven narrative focusing on the eponymous Jedi, played by Ewan McGregor. The early episodes were generally light on fan service and surprisingly restrained when it came to constructing content designed to be GIFed or memed. In its opening two episodes, Obi-Wan Kenobi felt like an actual story. Even that turned out to be too good to be true.

As Obi-Wan Kenobi raced towards its conclusion, it suffered the same fate of many of the Disney+-era streaming shows like WandaVision and Loki. It ceased to function as a coherent narrative and instead became a transparent exercise in brand management. The show’s season finale feels like it is receiving notes from the studio in real time, running through a checklist of everything that some algorithmically generated spreadsheet has determined will lead to a satisfying and fan-appeasing conclusion. Tellingly, the show waits until its penultimate scene to have Obi-Wan meet Luke Skywalker (Grant Feely). The show cuts away after Obi-Wan’s meme-friendly “Hello there.”

For a moment, this reference to an admittedly iconic line delivery from Revenge of the Sith feels like it is the big crescendo of the six-part television event, that old Simpsons “say the line” gag played deathly straight. The most bracing thing about this moment is the complete lack of shame. Obi-Wan Kenobi is not embarrassed that this is the best button it can place on six weeks of storytelling and the return of Ewan McGregor. It is proud that it made the audience wait for that payoff.

To be fair, this isn’t the closing scene of the episode. There is one more checklist item to be delivered. In the show’s closing scene, Obi-Wan reunites with the Force ghost of his old mentor Qui-Gon Jinn, played by Liam Neeson. This is somehow an even less satisfying payoff, given that Neeson already reprised the role in The Clone Wars, has openly talked about wanting to return to it in live action, and every fan knew that the character’s reappearance was inevitable.

Is this really the most satisfying place for Qui-Gon Jinn to return? Would it make more sense, and carry more emotional weight, if the character had communicated with Obi-Wan Kenobi at the climax of the story? Just like the cameo from Ian McDiarmid as Palpatine in the same episode, the return of Neeson as Qui-Gon Jinn feels like it was positioned more as fan service than storytelling. There are interesting ways to include both characters in a story about Obi-Wan, but this is just pandering.

Like so much modern pop culture, Obi-Wan Kenobi devolved into a fan-service delivery mechanism trading in nostalgia. It is notable that a sizable chunk of the finale is given over to an attack on Luke Skywalker and his uncle Owen Lars (Joel Edgerton), despite the fact that neither Luke nor Owen had appeared in the show since the premiere. There is no dramatic or character throughline for Owen or Luke that can be followed through Obi-Wan Kenobi. It is just bad storytelling on a basic level.

The finale effectively relies on two misconceptions. First, it assumes that the audience will care about these characters because they recognize them, despite the fact that they have had no active involvement in this story to this point. Second, it assumes that because they both appeared in the first episode, having them reappear in the finale without doing anything with them in-between will create the illusion of coherence. It’s a crass and amateurish trick. It doesn’t work.

What few narrative and character beats play out over the finale exist largely to fill gaps that didn’t need to be filled. As with the incorporation of memes, this feels like an overture to the “extremely online” generation of audience members who have confused “nitpicking” for meaningful engagement. It is a very condescending sort of storytelling, one that takes CinemaSins and Everything Wrong With as entirely serious schools of critical thought.

At one point, Darth Vader (Hayden Christensen and James Earl Jones) chides Obi-Wan, “I am not your failure, Obi-Wan. You didn’t kill Anakin Skywalker; I did.” It’s an extremely literal-minded way of resolving the “plot hole” between the original Star Wars and The Empire Strikes Back where Obi-Wan (Alec Guinness) remarks that Vader killed Luke’s father. Of course, Return of the Jedi already resolved that inconsistency by framing it as metaphor, rendering Obi-Wan Kenobi largely redundant.

That redundancy is built into how Disney chose to approach Obi-Wan Kenobi. It is hard to write a satisfying prequel or interquel, where the end of a story is already predetermined and the narrative is essentially constructed around the stuff that happened before the events that the audience cares about. There are good prequels out there, such as The Good, The Bad and the Ugly or the recent Planet of the Apes trilogy, but they require skill and thought.

The key to constructing a satisfying sequel is to understand that the story ends where the original begins. In many cases, that means that prequels have to have a downer ending, because the original film was likely a triumphant narrative. This is why, final act issues aside, Rogue One worked relatively well. It committed to the bleakness necessary for a story unfolding in the gap between Revenge of the Sith and the original Star Wars. It’s a rare movie where all the protagonists die, and that’s great.

Disney has been open about rejecting original showrunner and Academy Award nominee Hossein Amini’s plans for Obi-Wan Kenobi because they were too bleak. Disney replaced Amini with Transformers and King Arthur: Legend of the Sword writer Joby Harold. Watching the season finale, one can feel that strong push for a “happy” ending to the story of Obi-Wan Kenobi. In its finale, Obi-Wan Kenobi tries to position itself as a triumphalist narrative.

Obi-Wan has reconnected to the Force. He has seemingly resolved whatever lingering issues he had with Darth Vader. His faith in the larger universe has been restored. He no longer turns his back to suffering and strife, understanding that the universe needs heroes more than ever. After his old friend Bail Organa (Jimmy Smits) laments that the Empire “grows stronger and bolder,” Obi-Wan replies, “Well, if you ever need my help again, you know where to find me.”

There’s just one fairly sizable problem with this. The original Star Wars introduces Obi-Wan Kenobi still living in exile on Tatooine and disconnected from the larger universe, dismissed by Owen (Phil Brown) as “a crazy old man.” Indeed, while Obi-Wan Kenobi ends with Owen and Obi-Wan reconciling, with Owen letting Obi-Wan into Luke’s life as a gesture of goodwill, Star Wars implies that Owen has tried to distance his family from Obi-Wan as much as possible, with little warmth.

It is hard to construct a triumphant narrative where the hero reconciles himself to exile on a desert planet, where the locals dismiss him as a madman. When he is called to action, he has to find his own way to Alderaan, with no existing contacts. The central premise of Star Wars is that Obi-Wan and his generation failed. For all its flaws, Revenge of the Sith understood that. Obi-Wan Kenobi seems afraid to acknowledge this, so it becomes a story of heroes who accomplished nothing. 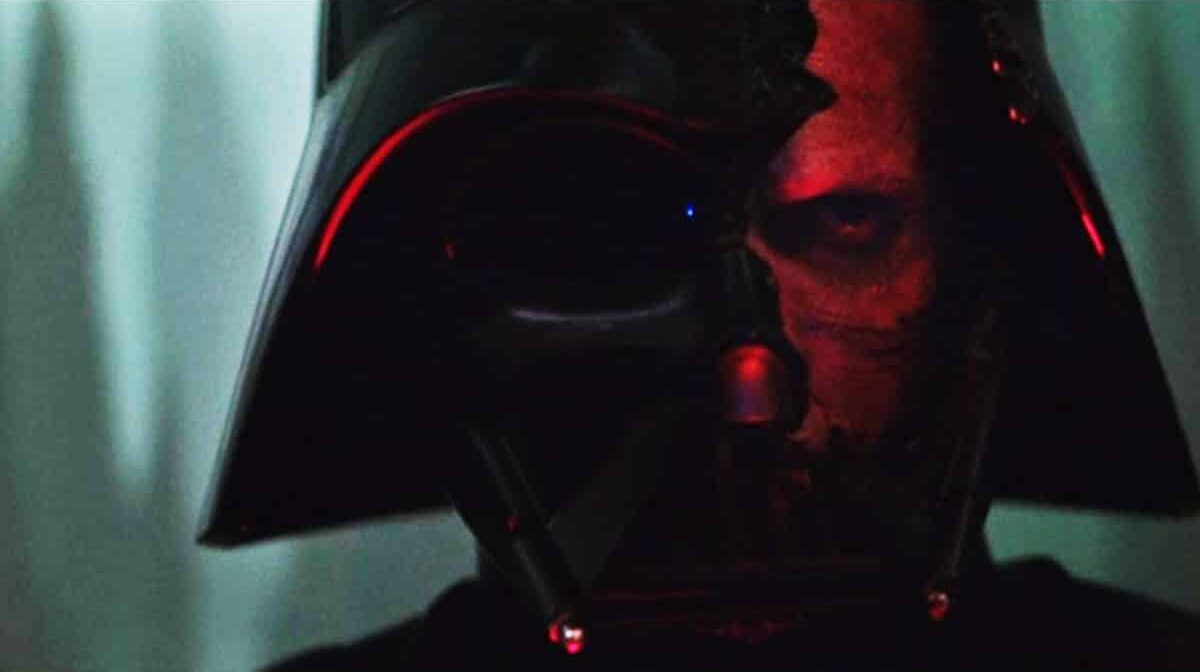 When Obi-Wan Kenobi brushes up against these contradictions, it just stops and hopes that the audience won’t notice. When Obi-Wan defeats Vader in a duel, knowing that this monster is tearing the universe apart, Obi-Wan just lets him go because… well, Vader has to appear in Star Wars. Despite being defeated and humiliated by Obi-Wan yet again, the final episode has Vader give up on his vendetta against his former master because… well, the show has filled its assigned runtime.

These are all articles on some itemized checklist, but they don’t add up to anything meaningful. This is typical of a lot of modern pop culture, particularly the Star Wars franchise since the reshoots on Solo. However one feels about them, it is possible to talk about The Force Awakens, Rogue One, and The Last Jedi as stories. They are about things. They have points of view. They advance arguments. They reflect the world around them and engage with what it means to be Star Wars.

What is Obi-Wan Kenobi about? What does Obi-Wan Kenobi have to say, whether about its world or its characters? What does it add to Star Wars? How is anybody’s understanding of these characters enriched or deepened by these six episodes, which could perhaps be broken out into an entire trilogy of movies? What is the point of any of this, beyond giving the internet a fresh GIF of Ewan McGregor saying, “Hello there”?