Chronology isn’t usually a big deal in videogames; timelines tend to go in one direction – forwards – and each game in a series pushes the overall narrative a little further along. Every now and then, a prequel will crop up, but they tend to be pretty well sign-posted and it’s simple to slot them into their proper chronological place. This is emphatically not the case when it comes to the Legend of Zelda games, however, which leap erratically – and confusingly – forward and back in time like an indecisive DeLorean. Both the series’ creator, Shigeru Miyamoto, and its current overseer, Eiji Aonuma, have said that the series does have a fixed timeline, but they’re rather reluctant to tell anyone what it is. 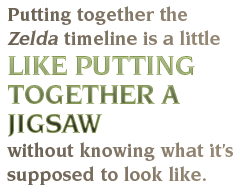 Naturally, this has led to a great deal of debate about what the proper order is, partially because it’s a fantastic puzzle, but also because it’s Zelda. It’s hard to imagine people putting in this kind of effort for most games, but the Zelda franchise has spanned 25 years, and legions of people have grown up playing the games. It doesn’t matter if they started as early as the original Legend of Zelda, or as late as Twilight Princess or even Spirit Tracks, they all share a deep love for the oft-threatened Kingdom of Hyrule. They need it too, as putting together the Zelda timeline is a little like putting together a jigsaw without knowing what it’s supposed to look like. Would-be Zelda historians aren’t working completely in the dark, however; from time to time, someone at Nintendo will describe a part of the jigsaw, either confirming or debunking a theory, or adding a new twist that no one had ever considered before.

For example, some fans believed that the green-clad hero in the various Zelda games was the same person each time, not unlike Mario in the Super Mario games. Unfortunately for the idea’s supporters, Shigeru Miyamoto demolished it in a 2003 interview with Nintendo Power, when he said that the series actually featured a multitude of green-clad heroes called Link. Nintendo later confirmed this in the opening to Wind Waker, which refers to the legendary “Hero of Time,” the title given to the Link from Ocarina of Time. This revelation not only changed the thinking about the timeline, but it also led to the rise of the “Multiple Ganon” theory, which suggested that if there were multiple Links in the series – and multiple Princess Zeldas too – then perhaps the series’ villain was a new incarnation each time, as well. This is yet to be confirmed or denied by Nintendo, but it does help explain why the series’ perennial villain seems so very hard to kill.

Unfortunately, the information that Nintendo allows to trickle out can sometimes raise more questions than it answers. In 1998, Shigeru Miyamoto – again talking to Nintendo Power – said that A Link to the Past came after Adventure of Link chronologically. This caused confusion amongst fans, because Ganon died in the original Legend of Zelda, and remained dead in Adventure of Link. No one knew how Ganon was supposed to have come back to life, and the back story for A Link to the Past made no mention of it. Even more confusingly, several pieces of promotional material for A Link to the Past said that it was set “generations” before its predecessors. There are a number of schools of thought regarding why the “Miyamoto Order,” as it’s known, doesn’t seem to match up with information in the games. Some believe it’s because of translation problems, others think that it’s a mistake, and some think that Miyamoto – who has previously stated that he values gameplay a lot more than story – didn’t really care about the timeline. Whatever the reason, the Miyamoto Order is now largely ignored.

But when it comes to Nintendo employees making things confusing, Aonuma takes top honors for introducing the idea of a branching timeline in an interview in 2002. When talking about where Wind Waker sat in relation to other games, Aonuma revealed that Nintendo thought of Ocarina of Time as having two endings: One ending saw Link as a child, stopping Ganon before he could throw his evil scheme into high gear, while the other saw Link as an adult, defeating Ganon after he’d taken over Hyrule. Aonuma said that Wind Waker was set around a century after Ganon’s defeat by the adult Link. This prompted a great deal of heated debate over just how many timelines there were, which only subsided – although not completely – when Aonuma confirmed that there were two timelines in another interview in 2006. 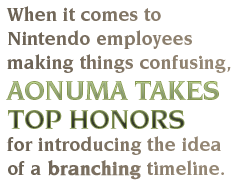 As Ocarina of Time is likely the earliest game in the timeline – at least until Skyward Sword comes out, which Aonuma has confirmed comes before it – every other game needed to be assigned a place in one of the branches. Majora’s Mask and Twilight Princess make up the Child branch, while the Adult branch is made up of Wind Waker, Phantom Hourglass, and Spirit Tracks. This order not only has the official thumbs up from Nintendo – Aonuma had previously placed Wind Waker, and also confirmed that Twilight Princess was part of the Child branch – but also holds up to the scrutiny of fans.

When it comes to the rest of the games, things get a little trickier, although there are several instances in the series where one game very clearly follows on from the other. Zelda II: Adventure of Link, is a direct sequel to the original Legend of Zelda, for example, and Majora’s Mask follows Ocarina of Time. These short chains, usually just two, or occasionally three, games long, create little sections where the timeline is pretty much set in stone. The order that these chains go in is still the stuff of guesswork and assumptions, but they do at least keep the number of timeline entries down to something manageable.

It’s possible to organize the games into a rough order, using information gleaned from plots, back stories, and implied links. What’s more, it seems that the rest of the games belong to the child timeline. The back story to A Link to the Past provides clues about where Minish Cap, Four Swords, and Four Swords Adventure – which all feature the wizard Vaati as their main villain – are placed. The plot of the last game in the chain, Four Swords Adventure, bears a striking resemblance to the legends about how Ganon became a monster and created the Dark World that appear at the beginning of A Link to the Past. The two stories don’t match up exactly, but Shigeru Miyamoto changed Four Swords Adventure‘s story late in its development, which would account for many of the discrepancies. With this in mind, it seems reasonable to assume that the entire chain comes after Twilight Princess, when Ganon is still a man – most of the time, anyway – and A Link to the Past, where he’s a giant pig monster.

Interestingly, in a 2004 interview with Game Informer, Aonuma said that Four Swords – which was a multiplayer expansion that piggybacked on the GBA re-release of A Link to the Past – was the “oldest tale” in the timeline. Unfortunately, this seems to be an occasion where information from Nintendo doesn’t hold up to scrutiny, as Minish Cap seems to show Vaati’s origin story, putting it earlier in the timeline. If this really is the case – and there’s not a lot to suggest otherwise – it means that Four Swords can’t be the oldest tale, unless there’s some time travelling going on that Nintendo isn’t telling anyone about. 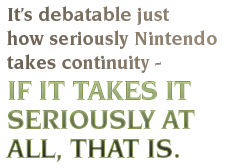 While it isn’t a universally accepted theory, there is reason to believe that A Link to the Past is set hundreds of years after Ocarina of Time. This theory is based in no small part on the appearance of what looks like a ruined Temple of Time in the forest in Twilight Princess when Link acquires the Master Sword. As Twilight Princess definitively comes after Ocarina of Time, it’s reasonable to assume that the deterioration continued over the centuries, until eventually only the pedestal seen in A Link to the Past remains in the heart of the Lost Woods. There are some doubts about this interpretation of the timeline, as discrepancies exist between the intact temple and its ruined counterpart, but it’s debatable just how seriously Nintendo takes continuity – if it takes it seriously at all, that is.

The original Legend of Zelda and its sequel, The Adventure of Link, likely come quite late in the timeline. The games lack the Master Sword, which could be because Link returned it to the Pedestal of Time at the end of A Link to the Past, where it was supposedly never used again, or it could simply be because Nintendo hadn’t come up with the idea of the Master Sword at that point. Either way, the games are thought to come after A Link to the Past, and its sequel, Link’s Awakening. Finally, the appearance of the twin witches Koume and Kotake – who Link kills in Ocarina of Time – in the two Oracles games, Oracle of Seasons and Oracle of Ages, suggests that paired games are also likely part of the Child timeline, where the events of Ocarina of Time never happened. The game’s plot, where the witches try to resurrect the dead Ganon, could mean that the games come after Legend of Zelda, although Ganon has died enough times that they could fit in anywhere.

Perhaps Nintendo will one day pull back the curtain and reveal what the Legend of Zelda timeline officially looks like. It might be a incredibly detailed chronology that cuts through the debate and theories like a hot Master Sword through Ganon, or it could be a sketchy affair that doesn’t really answer questions, so much as ask them in a slightly different way. But until that day comes, fans are still going to be cobbling together their own timelines, and they’ll probably be doing it long afterwards as well.