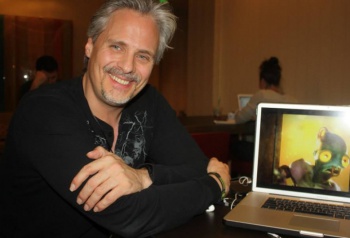 This came up early in my E3 chat with Lorne Lanning, who is best known best as the designer of Oddworld games. The series made its debut in 1997 with Abe’s Oddysee, a charming 2D platformer that was less about running and jumping than it was thinking your way out of any given scenario. It was followed by Abe’s Exodus, Munch’s Oddysee, and finally Stranger’s Wrath in 2005. Before the 2014 release of Oddworld: New ‘n’ Tasty, made with the help of developer Just Add Water, gamers hadn’t seen anything from the series in nearly a decade. But with the remake available on a number of platforms and approaching three million copies sold, DLC Alf’s Oddysee providing the first original series content in 10 years, and an Exodus remake on the way, “Oddworld‘s back” is a fair assessment.

We met at a tall table in the foyer of Los Angeles Convention Center’s Concourse Hall, near the Into the Pixel exhibit. “Welcome to my office!” he said of his casual surroundings. It was the first time I spoke to Lorne, but not the first time I saw him: that would be at the 2007 Philadelphia VG Expo, where he went head-to-head with Jack Thompson in a debate moderated by N’Gai Croal. My history with the Oddworld series goes back even further; Abe’s Oddysee took my house by storm in the late 90s, becoming a PlayStation obsession for my brothers and me. Naturally, I was thrilled to see Abe return to the market in the form of New ‘n’ Tasty; according to Lanning, I wasn’t the only one.

“We were really pleasantly surprised” at the reaction New ‘n’ Tasty received, Lanning told me, even before it was released. “We didn’t see that coming, that platforming would sort of be revitalized in the same way, that people would appreciate it, it kind of found its way back. Mobile, I think, drove a lot of that,” he added, even though New ‘n’ Tasty originally launched exclusively on PS4. As one would expect, “the old fans were supportive… But at the same time, we’ve had another phenomenon, which is that our audience grew up and has kids now. And there we saw that they’re turning their kids onto it.” He spoke of the feedback from younger gamers for whom the PS4 is their first-ever system (a humbling thought for those of us who started out in the 8-bit era): “It’s very different… It’s really a craftman’s game, you know?” Lanning stated. “The lighting, the animation, the attention to detail we pay, make these experiences kind of unique, and we’ve gotten a lot of new fans because of that.” 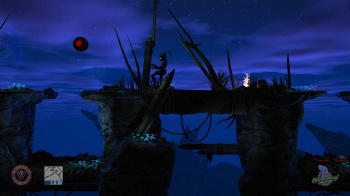 It’s hard to deny that Abe’s Oddysee‘s, uh, oddness helped it stand out in the late-90s game market. The story was a little dark compared to other platformers of its day: a Mudokon slave fleeing Rupture Farms with as many others as he can rescue to avoid being slaughtered. That seriousness was offset by humor, like funny-looking creatures, trigger-happy enemies, and lots of farting. But that’s not the only thing that made Abe’s Oddysee different – its platforming was less about split-second reactions and more about careful thought. “I thought a lot of games I played were – I don’t mean this critically, I mean this subjectively – they were mindless. They were just about twitch, and I really had very little interest in pursuing a concept like that,” Lanning explained. In Oddworld, “you gotta use your mind,” much like in day-to-day life. “For me it was about trying to reflect more of the real world skills that are enjoyable; solving a puzzle has an enjoyment factor to it. It has a gratification factor to it. I was more interested in that and trying to make you, as a gamer, not just rush through based on your skills.” So instead of a platformer based on “twitch,” he consciously decided to go in the opposite direction, resulting in the challenging, puzzling gameplay Oddworld fans know, love, and occasionally find themselves frustrated with.

When approaching Abe’s Oddysee so many years later, Oddworld Inhabitants had a clear vision, and it wasn’t just another high-def upgrade. “We’re gonna completely remake it, but we’re gonna stay true to the script, we’re gonna stay true to the tradition of what the platforming meant,” according to Lanning. However, the immediate publisher attention was unexpected. Sony’s Adam Boyes contacted Oddworld Inhabitants while it was demoing the work-in-progress at Eurogamer Expo in the UK and asked if Lanning wanted a PS4 development kit. “We went ‘c’monnn, this isn’t Sony, he’s pulling our leg,’ because that’s not the way things used to go. They didn’t just call you. You’d call them and say ‘Hey! We deserve one too’ and they’d go ‘You’re not EA, it’ll take a while.'” The following year, New ‘n’ Tasty was shown briefly at E3, and once again received a positive response. “We said, my god, I’m really glad we did this, but now we have to do a really good job. Now the pressure’s on.”

Rebuilding a 17-year-old game using current-gen technology naturally came with its perks and pitfalls, the latter of which affected development in unexpected ways. Lanning approaches game design “like a filmmaker, not a coin-op maker,” which was responsible for some of the more cinematic effects of Oddysee: the flipping animation when Abe moved from screen to screen; the “hopefully epic sense of scale”; it’s even noticeable in the plot, which was fairly sophisticated for a 1990s platformer. That flip screen, innovative at the time, caused some modern-day problems.

“So right off the bat the most obvious is that it used to be flip-screen platforming with a movie effect,” Lanning reminded me. “And even if you remember platforming in the day, no one did that. If you had to move screens they’d blink off and blink on. And the problem with that is that a character is over here, and then it blinks on and the character’s on [the other] side, and people couldn’t figure out where their characters were. And then we started adding wipes to start pointing people’s eyes.” Great idea in 1997, but without the limitations of the first PlayStation’s hardware, Just Add Water was able to create each level with continuous movement. “The problem for us, if you go back to the original game, there’d be a Slig snoring off-screen. So you knew you should sneak into the screen or you’d have problems. In the new game, everything’s moving faster, and we found you would be upon the Slig before you even knew the guy was sleeping. The way we solved it is A, we dialed the volume dependency difference and tried to give you more warning earlier. B, we created Zzzzzs that float off in your direction, so if you’re approaching that character offscreen you see Zzzzzs floating.”

The developer also learned a lot from making Abe’s Oddysee‘s sequels, and some of those gameplay ideas were integrated back into New ‘n’ Tasty. “We tried to bring things we learned from later games, like in Abe’s Exodus you could have more Mudokon followers, Munch’s Oddysee we figured out a health system that had a slightly different weight to it, more forgiving.” Each change from the core gameplay had its own ramifications, leading to even more design challenges. For example, with the implementation of actual physics, grenades handled differently in the remake – and Oddworld Inhabitants had to adapt to help the player figure them out. And making the gameplay continuous forced the need to tweak enemies’ shooting damage. “We gave different power to the guys far away, how many times can they shoot at you before you die, but it has to be dynamic enough that if you try to run past them you can’t… This type of balance so you couldn’t break the puzzles.”

Lanning called working out these issues “terrifying” because “we got pretty deep before we realized it’s not working.” It helped to finally be freed of the hardware limitations the team previously dealt with, though. “We had so little memory for sound,” he said of the original game. “The sounds and the voices were so highly compressed. Now we actually have quite a bit of memory for sound, for voices.” Background elements like windmills no longer have to be rendered and composited into the screen so archaically, giving them more realistic movement. Fire, smoke, and lighting have gotten modern-day makeovers. There are three times as many Mudokons in the New ‘n’ Tasty version of Abe’s Oddysee.

“It’s new in its presentation,” Lanning clarified, “but it’s not like we’re saying we have five new characters and stuff like that.” Again describing his “filmmaker” approach to game design, he compared it to classic movies being made with less-than-outstanding results. “Why do they rewrite the script? Reshoot it, and do new visual effects, 21st century shit – keep the same script. Don’t fuck with a great thing. But they do. And it’s never as good as the original. It’s never as good as the original.”

Four years passed between the announcement of a new Oddworld and the release of New ‘n’ Tasty; for the upcoming remake of Abe’s Exodus things should go a little more smoothly. “We’re in planning… it’s fuzzy to talk about and I only get in trouble when I do, so I’ll leave it at that,” Lanning said with a laugh. “We have solved a lot of those problems [with New ‘n’ Tasty] and they are continuous here. And we’re not trying to reinvent the wheel again, our goal is pretty clear. We wanna do to Exodus what we did to New ‘n’ Tasty… We’ve set a good bar, and we’re gonna aim at that bar.”