All human culture is phlegm. Phlegm emitted from the throat of human beings collectively as a species. And just like phlegm, sometimes analyzing it can give you a pretty good idea of the health of the entity it came from. It’s an occasional hobby of mine to examine broad trends in popular culture and try to figure out if that indicates a change in the collective mindset of the human race.

For example, for a while now I’ve had the theory that the moral depiction of dragons in popular fantasy gives a decent rough indicator of the global financial situation. In a boom, you see, the hoarding of gold is more likely to be considered to be a harmless eccentricity, even something desirable, and dragons are noble and nice. But in a recession, when everyone hates the people with all the money, then dragons are villains. Examples: Smaug is the archetypal asshole dragon, and The Hobbit was written in the Great Depression. The dragon on the far other end of the spectrum is Puff the Magic Dragon, and the best-known version of that by Peter Paul & Mary came out in the 60’s. This was also the point when the global economy was at its strongest in the entire twentieth century because of post-war redevelopment.

And I’ve noticed a new trend in popular culture that I think may be worth examining. Knack brought it to light, but it’s been brewing for a while. It’s like I was examining a little patch of dirt and then the camera pulled back to reveal that I was standing in a giant Godzilla footprint the whole time. And the nature of the footprint was this: At some point, everyone seems to have stopped caring about collateral damage.

There are sequences where Knack has become big and is smashing buildings apart willy-nilly, when nowhere near enough time has elapsed to allow for a full evacuation of the city by the human populace. The game even makes a point of showing us people running away in fear. And yet, at the end of the game, those very same people are throwing him a sodding ticker-tape parade. I can’t even remember the last time ticker-tape parades were a thing. Jack Bauer doesn’t get ticker-tape parades, and he spends all his time trying to ensure that buildings DON’T get destroyed. Admittedly by sticking tin openers up people’s noses.

Then there was all that business in the recent film Man of Steel wherein the big fight Superman has with his enemies deals damage to the city that must surely have gone into the billions. And to a lesser extent Superman’s playmate Batman left Gotham go to the weird mask-wearing dogs in his latest big screen outing, where there were no doubt lots of off-screen deaths and property destruction that Batman invites us not to care about ‘cos he was away on spine-mending holidays.

And I wonder what all of this punishment administered randomly to large swathes of population is saying about the attitudes of the human race in general. And to answer that question, we must ask what is represented by the unseen mass of uninvolved citizens and homeowners who we seem to enjoy getting victimized so much.

Perhaps one should read nothing more into this than yet another lingering symptom of 9/11, culture feels it has to manufacture disasters of ridiculous scale just because it will put up with a lot of things but cannot abide being outdone by reality. 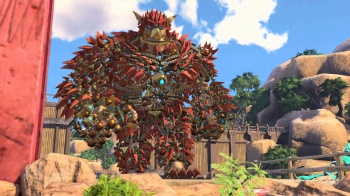 Then again, it may be an expression of self-hatred by a species that has drummed into itself over and over again that it is a force of mindless destruction on this planet, generating untenable quantities of sewage and garbage and stomping all over nature with our every misguided attempt to advance ourselves. We are craving from culture a finger-wagging voice of conscience to punish us for our terrible behavior. When we scarf down an entire super sized extra value meal, and fling the Styrofoam containers into the nearest forest to choke all the groundhogs, some little part of our brain feels guilt, and wants to assuage that guilt by watching our way of life being burnt in effigy.

Except that doesn’t really fit, does it, because the trend is for the destruction of faceless crowds, not the self; the self is usually represented in fiction by a protagonist or audience surrogate character. So perhaps instead the increased victimization of the unseen represents a growing awareness of our own complacency. Massacres and disasters that clock up significant body counts are happening all the time, somewhere in the world, but despite mass media allowing us to be more aware of them than before, we also can’t help having no sense of the weight, because these events lead to absolutely no consequences for us, here on a safer part of the world. Just as the death and destruction in films and games seem to have no consequences for the main characters that we can perceive.

We simply operate on the assumption that someone else will sort it out. Someone will rebuild all those buildings and fix all those shattered lives. Sometimes my electricity or my internet goes down, but my first instinct is not to do anything. Maybe go out to the library and kill a few hours, because I assume someone else is taking care of it. I don’t know what individuals might be killing themselves to bring the services back online, I’m barely even grateful when it does come back.

So that could be it. Or, then again, again, it could just be good old fashioned misanthropy. A very specific kind of misanthropy that has only become truly possible in recent years. You see, everyone has always liked to think of themselves as the lone voice of reason and intelligence in a world populated exclusively by idiots and timewasters who just can’t seem to grasp their obvious inferiority. But it’s only since the invention of the internet that this attitude can be enforced and confirmed within a few minutes of surfing. That’s why half the internet is so fucking condescending now, stuffed to bursting point with patronizingly-written social justice Tumblr infographics, and ‘comedy’ articles with titles like “10 Things You Never Knew About Science Except You Totally Did Because You Paid Attention At School”.

So all these hordes of invisible fictional victims that have been mounting up, we don’t think of them as people. We group them with the other invisible majority – all those people who posted stupid comments on your awesome video or with whom you got into trolly arguments about men’s rights; all of them now lie mercifully silenced. Under Mechagodzilla’s foot.