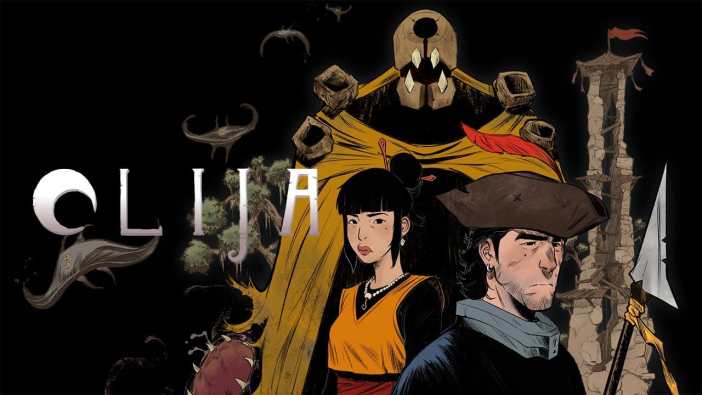 Story-driven platformers are a rare breed. Journey blew us all away with its shimmering, lonely desert, but balancing narrative beats with precise movement is a difficult challenge. This unusual fusion is a big part of what makes Skeleton Crew Studio‘s Olija so compelling — a game where story and gameplay mix so naturally that each aspect reinforces the other. A 2D platformer that dabbles in a range of different play styles over the course of its six hour runtime, the mysterious, uneasy aura the game exudes lingers long after a play session is over.

Captain Faraday’s life is in tatters. The people of his home village were struggling, their fishing nets coming back empty for days. He assembled a crew of trusted friends and ventured far out to sea, hoping for more luck fishing in unknown waters. The deep ocean is indeed more lively but ill-fated, as his fishing vessel gets smashed by a giant whale. Some time later he washes up on a shore, badly injured but clinging to life. Aided by a friendly old man, Faraday explores a haunted chain of islands, full of broken down towns, trap-infested dungeons, and magical weapons that curse the one that touches them.

His friends are still out there, captured by the undead locals, and he will not rest until every last one of his companions are safe. All the while, a mysterious woman named Olija seems one step ahead of him at every turn, guiding Faraday towards an imposing locked door located in the middle of the archipelago. As his goal becomes ever closer, the lands turn even colder and harsher, nature itself trying to stand in his way.

Olija‘s precise genre is a tricky thing to pin down. Some areas have hints of Metroidvania, with collecting weapons opening new paths and offering new ways to interact with the environment, but backtracking is rare, as most dungeons helpfully spit Faraday out back at the beginning when completed. The trap-heavy areas evoke the style of Oddworld: Abe’s Oddysee but lack the inventory-based solutions to evading danger. Teleporting weapons are used to create Portal-like puzzles, zipping back and forth to hit switches in just the correct order. All the while, intense combat sections lie in-between puzzle rooms: fluid speedy fights that range from bashing up lumbering undead to dodging dangerous bosses.

Such a varied approach to level design could have ended in disaster, but each section is well implemented and flows naturally to the next. Each island Faraday visits is themed around a certain style of play, and new elements are introduced slowly before the difficulty ramps up. A single tripwire might stretch across the screen in its first appearance, or Faraday’s cursed harpoon is initially used for a short teleport across the screen — a far cry from the flitting back and forth needed in the later stages. Faraday himself is a joy to control, fast and precise with easy access to his secondary weapons. Between solid controls and a smooth difficulty curve, each new surprise Olija throws at the player is a welcome one, constantly changing gears without becoming overly complex or confusing.

The main quest of Olija is fairly easy, barring a few tricky boss battles, but plenty of optional content is available for those after a challenge. The dungeons, shipwrecks, and swamps of the world are all littered with collectables, often hidden behind an obscured path or beyond a particularly difficult trap room. Faraday’s 10 crewmates are caged on different islands, enemies and treasure chests drop precious crafting materials, and ships in bottles and music boxes are hidden in the most unlikely places. Unfortunately the point of no return is not clearly signposted, so one of my poor crewmates remained missing in my run. The game still feels complete without collecting everything, but rescuing all the crew members was a goal I had hoped to achieve. 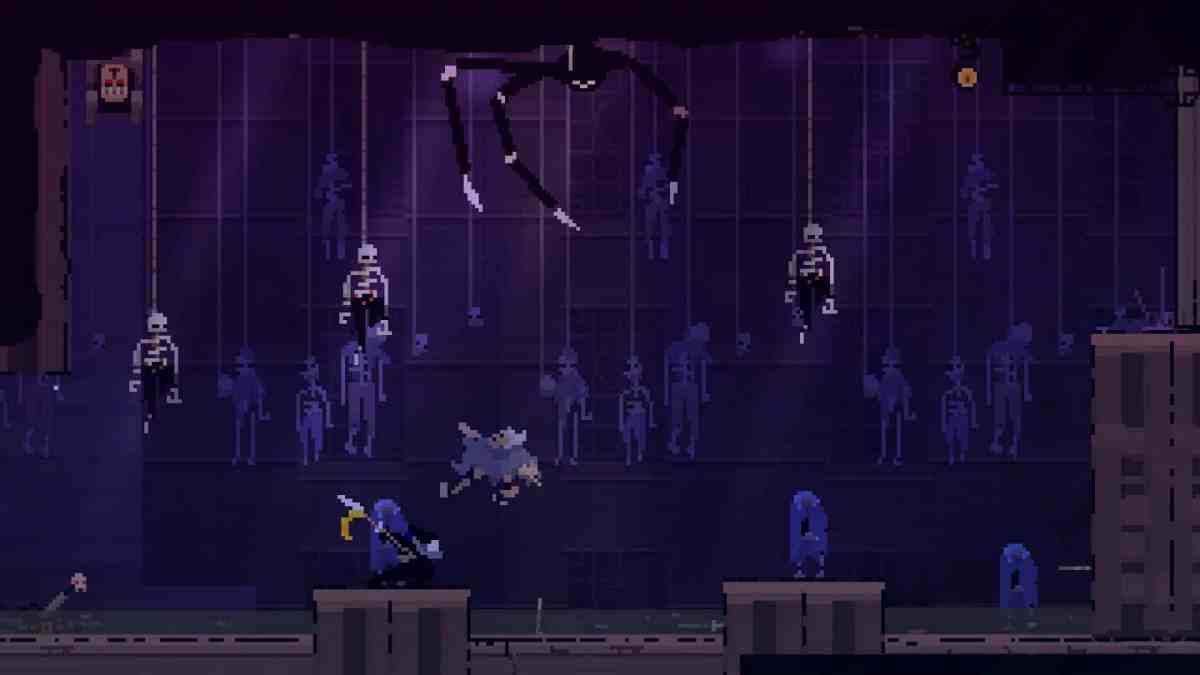 Crafting and upgrading opportunities happen at Oaktide, a floating village that slowly grows as Faraday rescues more people. Currency acquired from defeating enemies and smashing boxes is used to upgrade maximum health, and the rarer components are used for crafting hats. Each hat gives Faraday a special ability: throw feather-like daggers when dive rolling, absorb health from enemies, become immune to poison, increase attack power when he completes a fight without taking damage.

The hats are all powerful, but since they can only be changed at Oaktide or when sailing, it was hard to go past using a favorite. During a few boss encounters there were times where I wished I were wearing a different hat, but since the game returns you to the battle at death, there is no opportunity to change outfits. Having access to all the hats all the time would probably be too overpowered, but if Faraday could switch them on death or take two on an expedition, the player would be freer to experiment with the different setups.

Throughout the adventure, the world of Olija is constantly oozing with a sense of unease. Dialogue is minimal and often creates more questions than answers. Even the act of going through a door is a scene of terror, a stone doorway that shakes with supernatural forces. The foreground and background of an area are used to great effect: A figure might subtly shift out of view, or masses of undead arise on the horizon when a relic is stolen. Faraday is constantly being watched, both undead and humans disapproving of his actions. 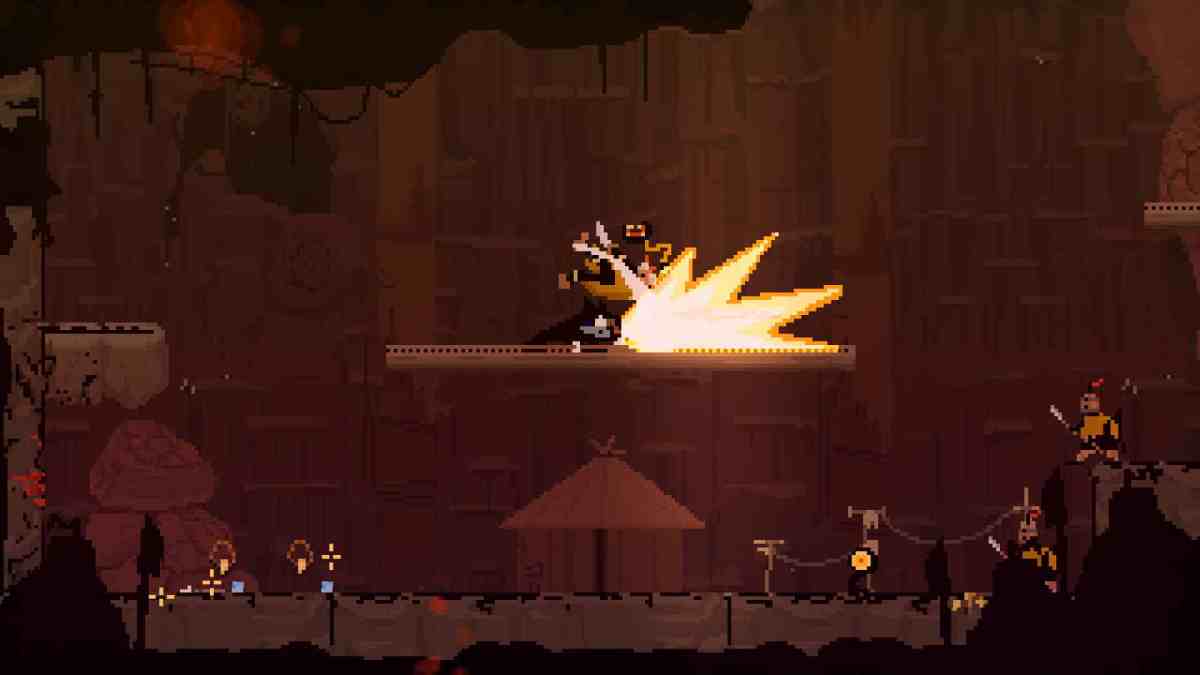 More details of the world are parceled out as the story progresses, but the air of mystery is never lost, especially around Olija herself. She never speaks, but her body language is highly expressive, and the rapport that builds between her and Faraday is a sweet spot amongst the unending gloom.

The tense atmosphere is complemented by the strong visual and sound design. The pixel art might look a bit simple in still images, but the movement of the characters is extremely fluid. Each screen is highly readable, with enemies, switches, and items that the harpoon can latch onto easily to distinguish at a glance. While the game uses a somber color palette full of dark browns and blues, each island is distinct from the last, taking Faraday from shipwrecks to swamps to ancient temples. During important moments, the style switches to a cinematic close-up of the characters, a beautiful fusion of pixel art and traditional animation. The soundtrack, created using traditional Japanese instruments, likewise ebbs and flows perfectly with the intensity of a scene, punctuating dramatic moments.

Olija is a game that swept me up and refused to let go until it was completed, mostly during one very long play session. The intense atmosphere, fluid movement, and constantly shifting gameplay kept me completely engaged for the entire playtime. Experiencing an impending sense of doom has never been so much fun.